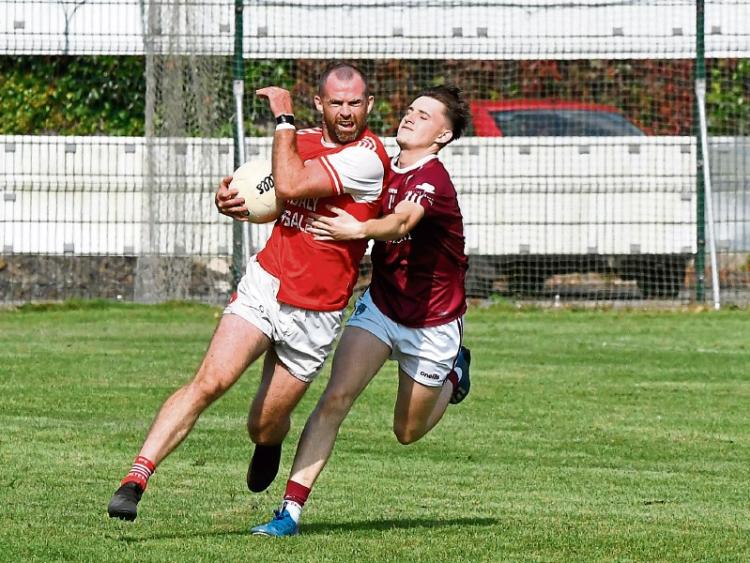 Ardfinnan retained their senior football status as a result of a two-point win over Galtee Rovers St. Pecaun’s in a thrilling relegation final in Cahir on Saturday afternoon.

On a sunny afternoon with a gentle breeze favouring Rovers in the opening half, Ardfinnan got the better start with two pointed frees from the impressive Billy Hewitt in the third and sixth minutes. With both teams dropping players back, there were several turnovers before Galtee Rovers got a great boost with a goal after nine minutes. Full forward, Shane Egan, made serious inroads along the Ardfinnan end line before passing to Shane Ryan, who fisted the ball to the net, putting Bansha into the lead. Within a minute, Michael Barlow had tied the scores with a point off his left foot.

The second quarter was a test of the free-takers, with Shane Egan hitting two for Galtee Rovers either side of a Daire Egan point. For Ardfinnan, Billy Hewitt hit a point from play and another from a free before Michael Barlow closed out the scoring with a close-range free to tie the scores at half-time, 1-3 to 0-6. Shane Egan opened the scoring in the second half with a well-worked point but the influential Michael Barlow quickly levelled matters once more. Then Shane Ryan put Rovers into the lead, only for Barlow to once more tie up the scores, 1-5 to 0-8, after six minutes.

Playing with the advantage of the breeze in the second half, Ardfinnan were patient in their build-up and a couple of sallies through the middle by Sean Nagle resulted in frees, two of which were converted by Hewitt, either side of a point by Luke O’Brien which opened up a three-point lead. A wonderful catch at midfield by Shane Ryan eventually found its way to Shane Egan and the full-forward landed a fine point to reduce the margin, only for Barlow to hit an equally good point on 13 minutes. By now Darren McGrath was on the field and he was quick into the action with a good point, followed by a similar score for Galtee Rovers from Tony O’Brien to leave the margin at one point, 1-8 to 0-12, heading into the second water break.

The final quarter was played out in a welter of excitement, as Ardfinnan tried to press home their advantage while Galtee Rovers sought the elusive scores to tie the game. On 18 minutes Adam McGrath was black-carded for a foul and Billy Hewitt restored the two- point lead but Darren McGrath pointed again to reduce the deficit to one. As play careered from end to end, Michael Barlow was once more on target for Ardfinnan before Galtee substitute, Tony Egan was dragged down heading for goal.

Referee Tom Loughnane initially indicated a penalty but changed his mind following consultation with his officials, and Shane Egan pointed the free to leave a point between the sides. A pointed free by Billy Hewitt put two between the sides once more and that was how it finished, despite some frantic scenes in the Ardfinnan goalmouth.

Ardfinnan will be happy to have retained their senior status and they can be thankful to their two midfielders, Colm O’Shaughnessy and Gerry Cronin, for putting their stamp on proceedings from the earliest moments, while Jonathan Ryan and Sean Nagle marshalled their defence admirably. Up front Hewitt and Barlow took the scoring honours but the clever interplay of the forwards posed many problems for Galtee Rovers and resulted in a high free count.

Galtee Rovers will be hugely disappointed to have lost, having played some excellent football at different stages of the sixty minutes. After a fine win over Killenaule in their opening group game, things went downhill with defeat to Commercials followed by a heavy loss to Cahir which propelled them into the relegation zone.

Eddie Grace could not be faulted in goal and the full back line of Evan Breen, Eamonn O’Connell and Conor O’Sullivan worked tirelessly throughout. Colin Morrissey led by example in the half back line with Sean Daly, Shane Power and Tony O’Brien pushing forward at every opportunity.

At midfield, Daire Egan and Eric Grogan worked hard to come to terms with the Ardfinnan pair, while up front Shane Egan, Shane Ryan and sub, Darren McGrath made most impression while Rhys Byron, Edmond O’Dwyer and Adam McGrath never gave up trying.