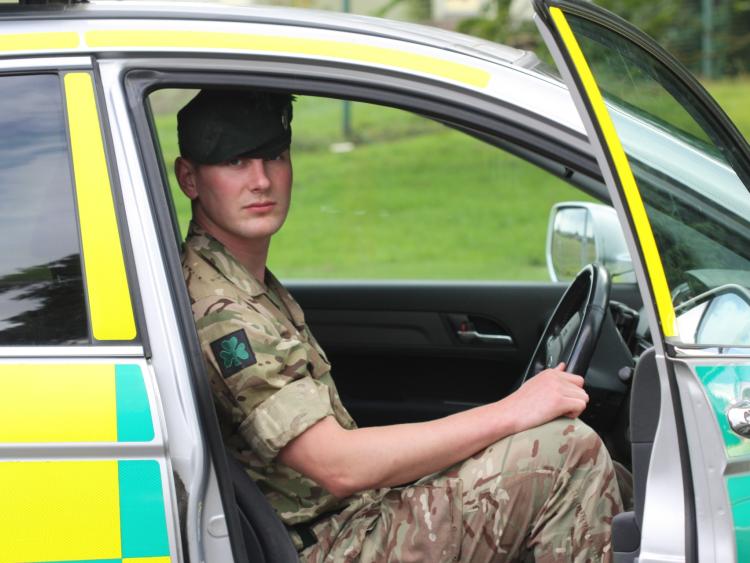 A Tipperary man who joined the British army has been so inspired by his work with the Welsh Ambulance Service during the Covid-19 pandemic that he has left the army to pursue a career as a paramedic.

Ranger Bernard McHugh, from Ardfinnan, of the 1st Battalion Royal Irish Regiment, was one of a 100 British soldiers who supported the Trust’s Covid-19 effort by driving and decontaminating ambulance vehicles at the height of the pandemic.

The 23-year-old who only moved to Tipperary from Dublin when he was nine years old, enjoyed his tasking so much that he has since secured a job as an urgent care assistant in Bangor, Gwynedd, and will take up the post in November.

“I’ve always known that I wanted a public service role, whether that’s in the police, fire or ambulance service. As a teenager I volunteered for Ireland’s Civil Defence, which supports frontline emergency services, and it was here that the spark to join the ambulance service was first ignited," said Bernard.

“I went to college to be an emergency medical technician, but the opportunity to join the army presented itself and it was too good to pass up," he said.

Since joining the Royal Irish Regiment in 2016, Mr McHugh has served in Afghanistan as part of NATO’s Force Protection, and has also been deployed to Norway on a large-scale exercise.

His role supporting the Welsh Ambulance Service through the Covid-19 pandemic was to drive ambulances in the Caernarfon area, freeing up paramedics to treat patients.

“It was on the way to a road traffic collision one day that the spark was reignited, and that’s when I knew it was what I wanted to do. It was the first trauma call I’d been to and I thought I handled it very well. Emotionally it didn’t get the better of me and that’s when I started to think seriously about pursuing a career in the service," he said.

“I enjoy helping people, and when patients thank you for what you’ve done, it’s such a rewarding feeling.”

Mr McHugh will relocate to North Wales in the autumn with his partner, who has also secured a job as a healthcare assistant.

He said that it had been a life-changing decision to relocate, but his family and friends were over the moon for him – his family in particular had always encouraged him to pursue a career in paramedicine.

“When I went back to Caernarfon station to tell the crews I’d been working with that I got the job, they were thrilled. They’re some of the nicest people I’ve ever met. I’m joining as an urgent care assistant, which I’m really happy about, but the end goal is to be a paramedic. I know that will take time but I’m willing to work hard," said Bernard.

Lee Brooks, director of operations at the Welsh Ambulance Service, said: “We’re thrilled that Ranger McHugh has decided to pursue a career in the ambulance service. Ranger McHugh brings with him a wealth of experience which will stand him in excellent stead as an urgent care assistant serving communities in North Wales, and we look forward to him joining the family.”

Major Nigel Campbell, 1 Royal Irish Second in Command, added: “The Welsh Ambulance Service has gained a dedicated and resilient individual who will undoubtedly become an important member of their team. We wish Ranger McHugh all the best in his new career and thank him for this service.”