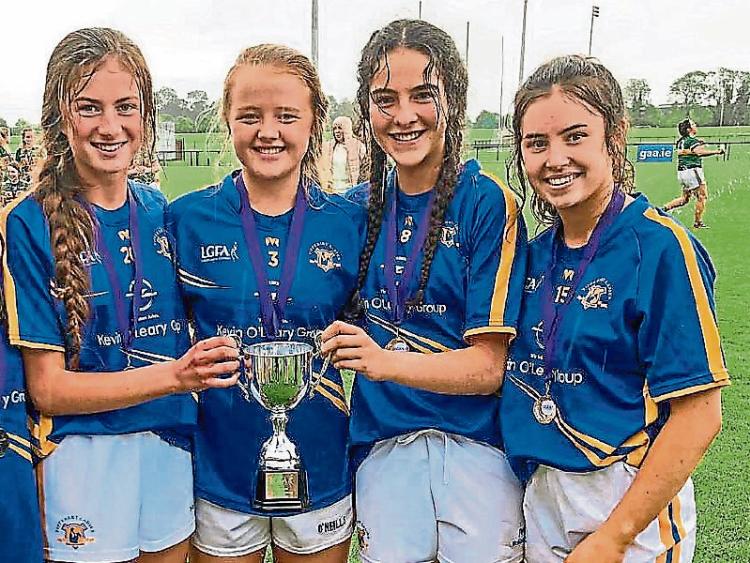 From left: Nell Spillane, Carrie Davey, Niamh Hayes and Leah Coen who all helped Fethard to victory over Templemore in the County Senior 'B' final in Ballyporeen last week.

A strong second half performance saw Fethard crowned Senior B champions on a cold Thursday evening  in Ballyporeen in the opening game of a weekend of ladies football finals.

A low-scoring opening half saw Fethard establish a 0-2 to 0-0 lead by the first water break, with points from Muireann O’Connell and Lauren Dowling.

On the resumption,  as has been seen throughout this season, the water break is having an impact on the pattern of the game, and Templemore quickly began to find their form and level the scores with points from Emma Fitzpatrick and Neasa Towey.

The sides swapped points at either end before the half- time break to keep the score line level at Templemore 0-4 Fethard 0-4.

Again Fethard were first to open the scoring in the second minute of the half with a pointed free from Kate Davey.

The sides exchanged wides before the scores were again brought level with a point from Elaine Fitzpatrick.

Templemore then went ahead for the first time  with a point from Emma Fitzpatrick.

However  Fethard never let them out of sight and responded with a point of their own from full back Carrie Davey,  keeping the scores at 0-6  apiece.

The arrival of the second water break seemed to come at the right time in this half for Fethard and it was after this break that they began to pull away from Templemore.

On the resumption a poor kickout saw Leah Coen break through the defence. Her first shot was saved but she netted the rebound to put Fethard firmly in front.

They tagged on two further points , one each from Niamh Hayes and Lucy Spillane, to wrap up the game.

Templemore did have a late goal chance in injury time but they were smothered out by the Fethard defence.

The player of the match award was awarded to Fethard midfielder Lucy Spillane.