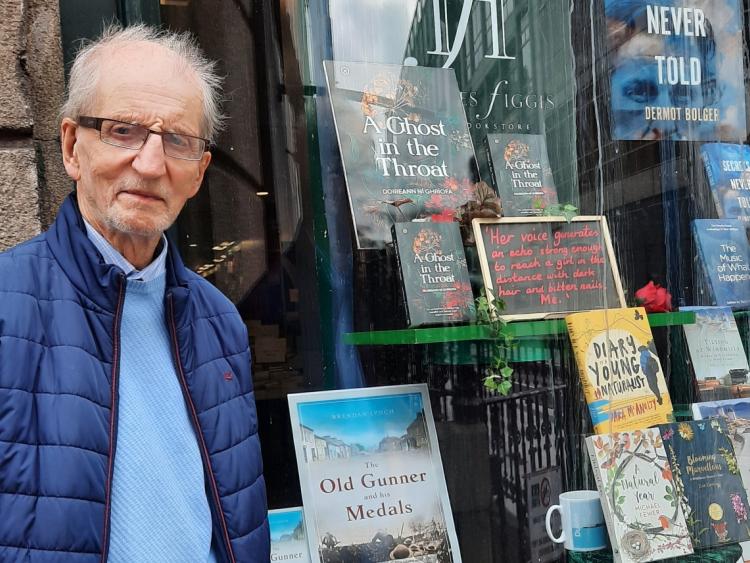 Author Brendan Lynch has released his new novella The Old Gunner and His Medals, in Hodges Figgis, Dublin’s oldest bookshop.

The book is based on WW1 veteran Dan Doherty, who lived in Toomevara until his death in October 1951. Brendan Lynch recalls ‘Dan was one of the village characters.

Not only with stirring stories but for his curiosity and knowledge of local history, mainly gleaned from his erudite neighbour, Bill O’Meara - whose brother Padraig and fellow-teacher Tom MacDonald had compiled The Spirit of Tipperary anthology of local history and literature. Each St Stephen’s Day, he leaped through the streets in a colourful cloak and mask and brandishing a long wooden staff.

He collected more money than the other wrenboys put together, before treating them all to lemonade in Harty’s pub - and himself to longer draughts of something more alcoholic.

‘The Gunner’s life was not an easy one however. He often ran shouting through the same streets at nighttime, endeavouring to escape his war nightmares. He had left Ireland to cheers and a brass band, but returned to a country in turmoil, Instead of the peace and quiet he had dreamt of in the trenches, he found he was in danger again – from fellow-countrymen. Many veterans were attacked, over a hundred murdered including the father of one, George Sheehan in Silvermines.'

Forced to bury his medals, the book relates how Dan’s wit and zest for life enabled him to survive his trials. The heady days of revolution long forgotten, he becomes a village celebrity when he unearths his decorations thirty years later, with the help of a schoolboy who appreciated his stories and sacrifices. ‘Children who had mocked his limp and threadbare clothes now followed in the wake of his pipe smoke. He was interviewed by the local newspaper correspondent. A meitheal of locals repainted his house and replaced his battered delph and saucepans.’

Priced €12, The Old Gunner and His Medals is available in The Bookshop, Pearse St, Nenagh and Casey’s Supermarket, Toomevara. Copies of signed limited editions are available from Mountjoy Publishing (mrg_lynch@yahoo.ie).

Brendan Lynch concluded 'Sadly, despite my best efforts, I have been unable to locate the Gunner's grave, which is in either Toomevara or Latteragh. Hopefully, someone will one day uncover and record it. A little headstone is the least the Gunner deserves after his adversity and his rich contribution to village life!'