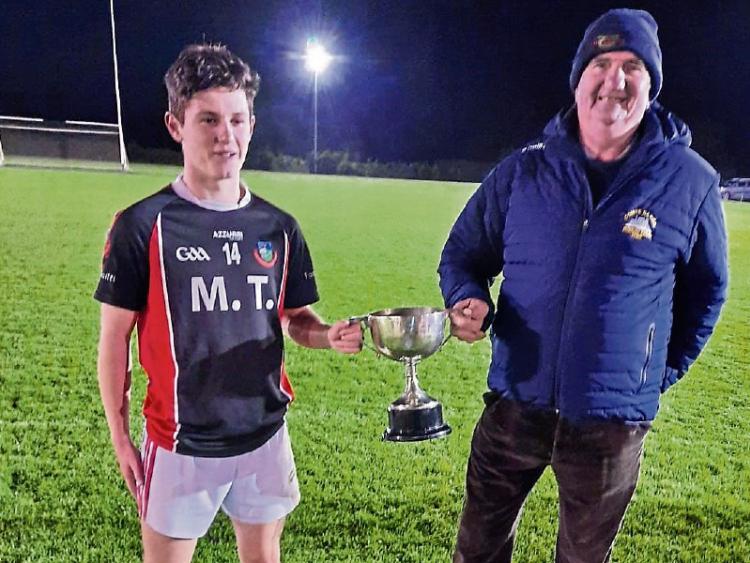 Michael Ryan (C), west board chairman presents the Crowley Cup to Adam McGrath, Galtee Rovers captain, after the west U-21 B football championship final in Golden.

WEST U21 B FOOTBALL CHAMPIONSHIP FINAL

Galtee Rovers secured their second McGrath Oil west Tipperary Under 21B football championship title, and their first in the grade since 1988, when overcoming Golden/Kilfeacle at Golden on Wednesday night.

Played on a good surface, on a crisp night, this game never reached the expected heights, as Galtee Rovers proved  much too strong for their opponents.

Three seasons ago these teams were a combination at Minor A and, in truth, Galtee Rovers would have not have been out of their depth in the Under 21 A grade this season.

The game was slow to settle, with a couple of broken-down attacks on both sides before Kevin Hally opened the scoring after seven minutes with a converted free.

This feat was repeated five minutes later to put the home side two up.

Up to this point Galtee Rovers were finding it difficult to get on target, mainly through good defending on Golden’s behalf, but also with over-elaboration in their general play.

Adam McGrath opened the Galtee account with a point after 13 minutes.

This score seemed to relax them, as Rhys Byron and Edmund O’Dwyer followed up with two further points, both from play, to put them ahead before the first water break.

After the water break, Galtee Rovers continued where they left off and two further points from Edmund O’Dwyer, one from a free, and a converted free from Shane Ryan put them four up at the half-time break, 0-6 to 0-2.

Golden/Kilfeacle needed a good start to the second half but it was Galtee Rovers who were first on the scoreboard with a Shane Ryan point from open play after two minutes.

Kevin Hally replied with two points for the home team, either side of an Adam McGrath point from play, but it was Galtee Rovers who drove on and points from Callum McCarthy and an Edmund O’Dwyer free had them six points to the good with 15 minutes remaining.

After the second half water break, Kevin Hally kicked his and Golden’s fifth point of the evening.

But overall the home side were lacking in penetration in the forward division while Galtee Rovers continued to keep the scoreboard ticking over with points from Shane Ryan, from placed balls, and a wonderful score from open play from Eamon Quirke.