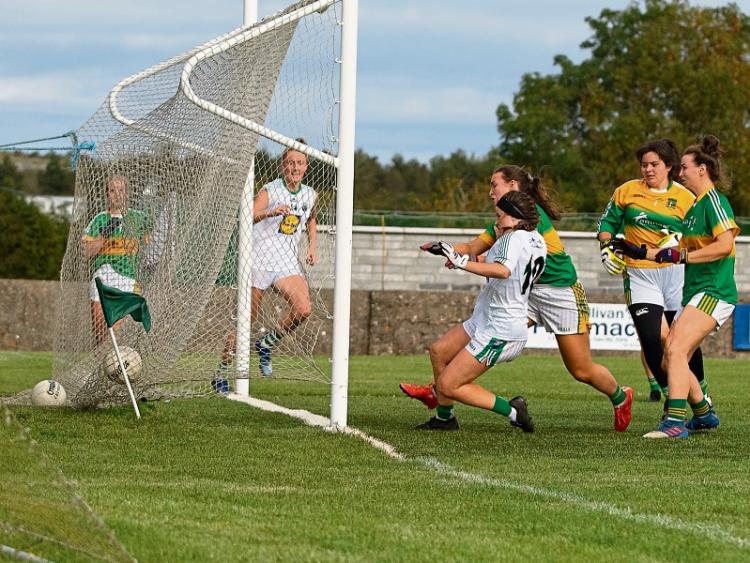 Roisin Howard kicked in with another important goal for Cahir in their extra-time win over Banner of Clare in Kilmihil, County Clare, last Friday night.

Cahir Ladies know how to keep their supporters and mentors on the edge of their seats, as they held on in a nail-biting finish after extra time on Friday night last   to secure a Munster semi-final meeting with Cork’s Mourne Abbey.

Played in St. Michael’s Park, Kilmihil, Co Clare the Cahir side, for the second week in-a-row, had to fight out the game in extra time. An exciting and enthralling affair, it was a game that was held in the balance until the final whistle.

Cahir opened up a two -point lead over Banner in the first five minutes of the game. However it was Banner who got the game’s opening goal in the eighth minute when their full forward Aoibheann Malone found the net. Banner settled into a rhythm and by the first water break had made a seven-point turn around and were leading Cahir by 1-7 to 0-5.

On resumption of play Banner’s Louise Woods put them six points to the good but Cahir came charging back and Aisling McCarthy struck for their first goal. Banner quickly responded with one of their own from Niamh O’Dea.

Cahir were in the ascendency and finishing the half a point up on a scoreline of Cahir 2-9 Banner 2-8. Cahir’s Roisin Howard found the net to give them that one- point lead at half time.

Banner again went in front when Grainne Nolan goaled after the sides exchanged points in the opening minutes of the second half.  Niamh O’Dea followed this up with two further points to put Banner into a four-point lead, 3-11 to Cahir’s 2-10.

Cahir narrowed the lead again to just two points  but Banner forged on and put four again between the sides.

However, an Aishling Moloney special in the final minute of ordinary time put just the minimum between the sides.

Then a converted 30 metres free from the boot of Aisling McCarthy sent the game to extra-time, leaving the score at the end of ordinary time  Cahir 3-13  Banner 3-13.

In the opening half of extra-time Cahir seemed to be in control, scoring 1-3 to Banner’s 0-1. Substitute Niamh Costigan, who made a huge impact in the previous  week’s county final, linked up with Aishling Moloney to find the back of the net to leave the half-time score in extra-time at Cahir 4-16 to Banner’s 3-14.

But the Ennis-based Banner were not for giving up and team captain Grainne Nolan broke through the Cahir defence midway through the second period of extra-time to put just a point between the sides again. She quickly followed this with a converted free but Cahir managed to hold on to secure victory.