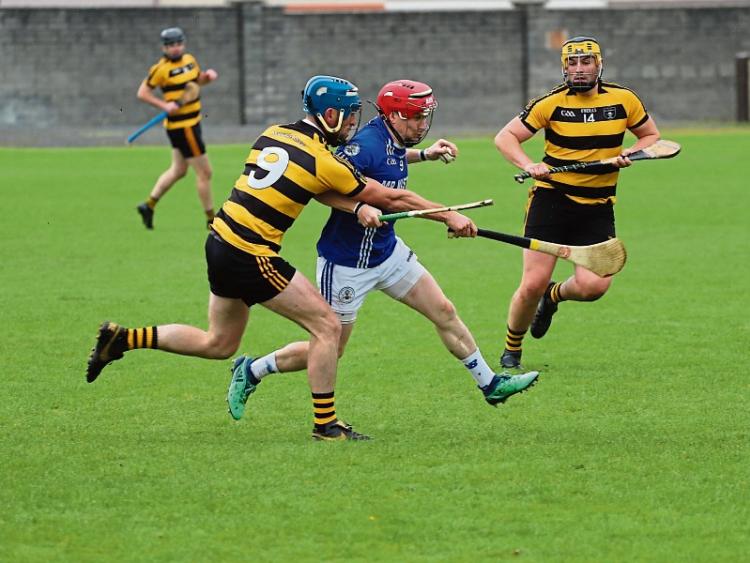 Arravale Rovers went one better than twelve months ago to claim a third-ever Gleeson Concrete West Junior A Hurling Championship title when they defeated Rockwell Rovers in Dundrum on Sunday afternoon.

With the safety net of the county quarter-finals having been abolished for the current campaign, Arravale Rovers, beaten county finalists in 2019, knew that to get back to the same stage this season they had to lift the west title or it was season over.

As it transpired, their superb start led them to a first title in the grade since 1964.

They came up against a Rockwell Rovers side to whom they gave a trimming early in the campaign.

But the New Inn side  had put out many people’s favourites for the 2020 competition, Lattin/Cullen, seven days previously.

The game was played in stark contrast to the weather of seven days previously, with the Covid-restricted crowd well wrapped up due to a big change in the elements.

Arravale Rovers laid the foundation for their win with their workrate, especially in the opening quarter when they led 0-9 to 0-0 at the water break.

They afforded very little space to the Rockwell Rovers forwards, who struggled  to make an impact. Up front Johnny Ryan, Donagh Leahy and Mikey O’Dwyer spearhead the Arravale attack to good effect, the latter pair  finishing with 1-5 between them.

Johnny Ryan yet again covered almost every inch of grass on the field, contributing eight points, in which he was almost unerring from placed balls, while his overall contribution to the team was immense.

Cormac Maher, despite limited possession, finished with three points, the only member of the starting full forward to find the target.

Their defence was well structured throughout and added to in the second half when Johnny Ryan dropped back as sweeper.

Shane Leahy and Darren Lowry held the spine of the defence very strongly while goalkeeper Thomas Gleeson had little to do, except from being blocked down on one occasion in the second half by Pat Hally.

They finished with 1-10 from play, with all their half forward line on target. The fact that they failed to score in the final quarter, though comfortably ahead, will be another concern as they head into a county semi-final against Toomevara.

Rockwell Rovers worked hard from start to finish but struggled to make any real impact against a well-drilled and marshalled Arravale Rovers defence.

TJ Ryan was one of their main performers and he worked tirelessly in midfield, scoring two points.

Liam Fahey started centre forward but came out the field more in the second half and got on a lot of possession to try and spark Rockwell Rovers into life. Likewise, Gavin Ryan, who moved out of corner back late on in the game and tried to take the game to Arravale Rovers. Alan Moloney was their top scorer from placed balls, finishing with five points. Rockwell Rovers finished with just four points from play.

In the first half Arravale Rovers played with the advantage of a strong breeze  blowing into the dressing room end. Two Johnny Ryan frees had them off the mark in the opening five minutes and they quickly built on this.

Johnny Ryan was key to this with his workrate, as well as his ability to add scores from both short and long- range frees.

Mikey O’Dwyer and Donagh Leahy, who caused major problems throughou,t both opened their accounts with points from play, as did corner forward Cormac Maher.

Rockwell struggled in this quarter, being blocked down on several occasions as they tried to pick out their passes playing against the wind.

Alan Moloney eventually got Rockwell Rovers off the mark in the 21st minute with a point from a free and quickly repeated the feat. Conal Donovan responded for Arravale Rovers before free-takers Johnny Ryan and Alan Moloney swapped points.

Rockwell Rovers came more into the game in the second quarter with players like Liam Fahy and TJ Ryan getting onto a lot more possession. Another Donagh Leahy point had Arravale Rovers ahead 0-13 to 0-3 at the break.

Rockwell Rovers needed a good start to the half but it was Arravale Rovers who quickly added to their advantage. When Johnny Ryan was fouled from the throw-in he quickly added to his tally.

TJ Ryan got himself on the scoreboard in the fourth minute of the half in what was Rockwell Rovers’ first score from play.

While Rockwell Rovers needed a goal it was Arravale who looked more likely to score one. Donagh Leahy, who minutes earlier had got in on goal only to be bottled up and over-carried, eventually got the game’s first and only green flag.

Arravale had lost possession but Cormac Maher fought hard for the turnover, with Donagh Leahy bursting through to tap over the head of the advancing Michael O’Donnell and into the net.

The goal  ultimately finished the game, with Arravale Rovers now 13 points clear with 20 minutes left to play. Further points from Johnny Ryan (free) and Cormac Maher saw Arravale Rovers ahead at the second water break by 1-17 to 0-5.

The final quarter petered out, with Rockwell Rovers resorting to dropping frees in short in the hope of getting a goal.

Arravale Rovers, though, will be a bit worried with the amount of frees conceded in the final quarter, especially had the opposition been a lot closer.