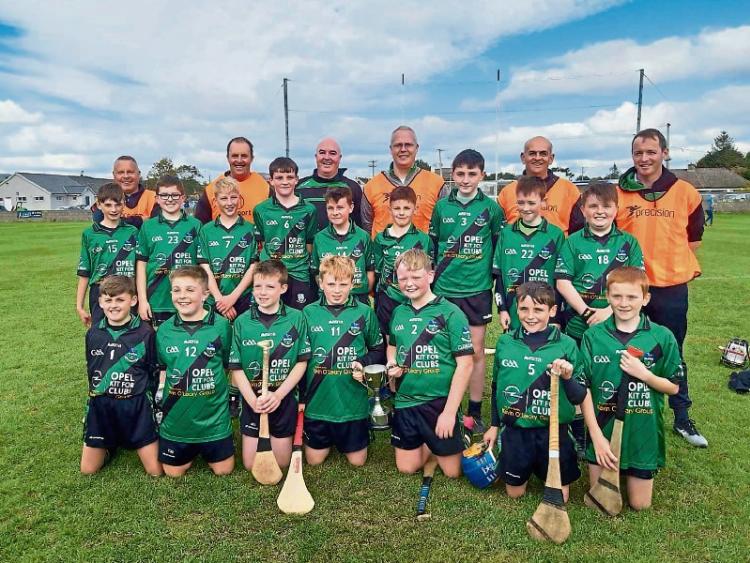 The Clerihan team and mentors celebrate with the cup following the side’s county Under 12 C hurling final victory.

This was a remarkable success for Clerihan. Having won the county under 12 C title for the first time last year they retained it in emphatic fashion, with a dominant performance against north Tipperary champions Portroe.

The boys from north Tipperary were in the game until the second water break. However, upon the resumption of play Clerihan threw off the shackles and finished winners by 12 points.

This performance was built around a teak-tough defence.

Led by Michael Dempsey, Clerihan were in no mood to give anything away. Make no mistake, this was a well- drilled defensive unit. The hooking and blocking was a joy to watch. Wing back, Darragh McCully gave an outstanding display. A memorable block under the stand in the first half was a standout moment.

This county final will be remembered for the performance of Shane Cooney. Finishing with a tally of 1-6, he covered acres of ground in a man of the match display. From the outset he gave a display worthy of any county final. His partnership with the stylish Roan Hally was key. Each turned scorer and provider for their respective goals. Their constant threat, combined with the workrate of Zach Palmer in midfield and Harry Hickey in defence, gave Clerihan the platform for victory. Portroe will be disappointed they didn’t make some of their pressure count on the scoreboard.

This result was not a true reflection of what has been a great year for them. They have a great team with fine hurlers throughout the field.

Clerihan’s team will go down as history-makers. Back-to-back county hurling champions is a great achievement. Since the club was re-established in 2005 a huge amount of work has gone into preparing teams for underage competitions. The challenges for small parishes throughout the county are stark but Clerihan are now bearing the fruits of their hard work. Last year’s win was the first time Clerihan had won a county hurling title at any level. A huge feat. Now that this title has been retained, a bright future looms large for this group of players.

Over the last decade this small club on the outskirts of Clonmel have more frequently appeared on county and south Tipperary roll of honour lists. Big achievements include U-14B county football honours, county U-12C football, south Tipperary minor C football, minor C hurling. The adult team has also seen their stock rise and now compete in junior A football and continued underage success will no doubt be vital for their progression over the coming years.

This year’s U-12 team set their stall out early with big victories over Skeheenarinky, Fr. Sheehy’s, St. Mary’s, Cahir and Clonmel Óg. A titanic struggle in the south final saw Clerihan overcome neighbours Moyle Rovers by the narrowest of margins.

The county semi-final against another neighbouring team, Rosegreen, provided a stern test that stood to Clerihan in the county final. Mentors  Garret Condon, Ger Horan, Gavin O’Dwyer, Steve Hickey, Aaron Harrigan and Seamus Hally deserve special mention and recognition for all their hard work.But the plaudits must go to the players.

Goalkeeper Calum Condon was rock solid all year and can be very happy with a clean sheet in the final. Harry Hickey has had an immense year and is becoming noted for his skill and trademark clearances. Michael Dempsey had a great final and didn’t take a backward step all year. Cian Dunne Clarke was tenacious at corner back. Darragh McCully was tough and stylish. Shane Cooney has consistently delivered. Zach Palmer is the engine room of this team. Roan Hally has all the characteristics of a great forward. Jack O’Dwyer had a great first half and has improved with every performance. James Ahearne threatened goal at every opportunity and a big future is in store. Tommy O’Dwyer is a great forward and next year will be a big year for him. Matthew McElroy put in a big effort when introduced, constantly probing and looking for the breaks. Finn Hogan is Clerihan’s answer to the Bonner Maher.

Other members of the panel include the stylish Luke Mordaunt.  Keith Cooney has been integral to the success of this team. And last but not least, DJ Horan – remember this name.

Clerihan GAA is a small club, with less that 250 members. It was founded in 2005 and has grown from strength to strength .

Chairman  Paddy Flannery welcomes  any child from the age of five years  to come to join the club.  Clerihan GAA club fields  teams from U-6 all the way to Junior A adults.