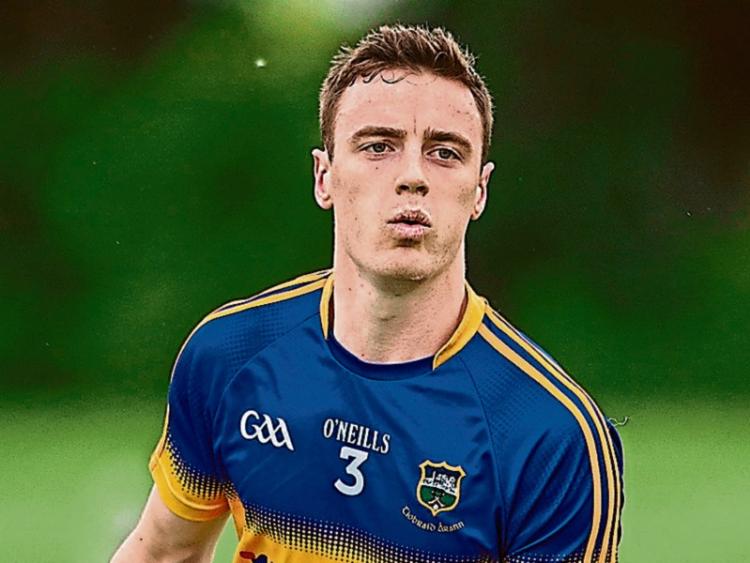 Alan Campbell, put in a pair of heroic blocks one after another during Tipperary's win over Offaly. The effort was rewarded when Liam Boland pointed for Tipp at the end of the move.

For now at least, Tipperary senior footballers are back in business following their three points victory over Offaly at Semple Stadium, Thurles, on Sunday last, a victory that puts them into a positive frame of mind for next Sunday’s all-important relegation clash with Leitrim at Carrick-on-Shannon. All that of course, dependent on how things pan out off the field in the next week.

But it was good for Tipperary to be back on the field of play on Sunday after a seven-and-a-half months inter-county hiatus since their last game against Longford on Sunday, March 1. And what was more welcoming for Tipperary manager David Power was that the victory gave his side their second win of the campaign and also put an end to three consecutive league defeats - against Cork, Derry and Longford.

Tipp’s Division 3 survival thankfully still lies in their own hands as they head to the north west on Sunday, where a draw will be enough to avoid back-to-back relegations. There are other permutations that may yet come into play whereby Tipperary could lose by five points or less and still survive, but that would involve another defeat for Offaly next Sunday also. But the  bottom line for Tipp for now is - get at least a draw against Leitrim and you stay put in Division 3.

On Sunday last Tipp started solidly against Offaly and were 0-5 to 0-1 ahead after 14 minutes with Steven O’Brien showing very powerfully early on. Two points from captain Conor Sweeney (including the opening free), were followed by a brace from the impressive Jack Kennedy and another by his Clonmel Commercials teammate Michael Quinlivan.

Indeed it could have been even better for Tipp had Kevin O’Halloran converted a sixth minute goal opportunity where Quinlivan had fed him the chance but Offaly goalie Paddy Dunican did well to save the effort.

A pair of Offaly frees from Cian Farrell and Bernard Allen, to add to Farrell’s fifth minute free, had the game back to 0-5 to 0-3 by the 16th minute and it was very much tit-for-tat for the remainder of the first half after that.

Michael Quinlivan and Steven O’Brien were rewarded with points their hard running deserved before Offaly replied with two of their own from centre-back John Moloney and a nice left legged effort from Bernard Allen to keep the margin at just two after 20 minutes of play.

Tipp captain Conor Sweeney had his second from play in the 21st minute, taking full advantage of a chance after an attack looked like it had broken down.

Tipperary suffered a major blow shortly afterwards when Steven O’Brien had to leave the field with an injury that most likely will rule him out for next weekend.

Bernard Allen on the half hour mark had Offaly’s first score for 11 minutes to make it 0-8 to 0-6.

The game’s only goal soon followed. A quick kick-out by Evan Comerford brought Brian Fox into play and he put Michael Quinlivan through. The Commercials man’s initial effort was superbly save and as he attempted to get his second attempt away he was fouled. Conor Sweeney cooly slotted the penalty low to the keeper’s left and Tipp suddenly had a five points cushion with half-time approaching.

From the kick-out Tipp again took possession and Kevin O’Halloran was once again played through, however, the luckless Portroe man was to be denied twice, first by a defender’s goalline clearance and then by the keeper himself. Tipperary could have put the game to bed there and then had the chance not gone abegging.

Credit to 'The Faithful' though, who pushed forward at ever opportunity, and they finished the half strongly with three unanswered points from Cathal Mangan and two further Cian Farrell frees to be just two points adrift at the break, 1-8 to 0-9.

On the resumption Tipp had the first two points with Kevin O’Halloran and Jack Kennedy pointing, the industrious Kennedy seizing on a turnover by his defence to run 50 metres to score.

But Offaly weren’t letting Tipp away with anything and matched that pair of points with two of their own from half-time sub Anton Sullivan and Ruairi McNamee to keep the home side within two points once more.

A Conor Sweeney 43rd minute free, won by the hard-working centre-back Kevin Fahey, only served to interrupt the Offaly comeback, with Eoin Carroll and Peter Cunningham raising white flags from play to make it a one point game after 13 minutes of the second half.

Indeed Offaly had a chance of an equaliser from a '45' by their goalkeeper Paddy Dunican in the 51st minute but his effort fell short.

Liam Casey, who was having a much better second half at midfield for Tipp, finished off a fine move with a point to give Tipp a 1-12 to 0-13 advantage at the second half water break.

A 'marked' point by another Offaly sub, Niall McNamee, had the scoreline back to a one point game before Tipperary suffered a serious blow with the black carding of Jack Kennedy in the 54th minute. It was a lazy blocking-type challenge by Kennedy and he could have few complaints with another unwelcome card. It’s an aspect of his fully-committed game he needs to improve upon and no team can afford losing players for 10 minutes in vital games.

But backs to the wall now and numerically disadvantaged Tipp had the next three points from play from Liam Boland (2) and Liam Casey again for a 1-15 to 0-14 cushion as the game headed to a conclusion.

Liam Boland’s second point originated with the heroics of two superb full-length blocks in defence by his Moyle Rovers’ clubmate Alan Campbell before the ball was worked up the field for Boland to fittingly acknowledge the hard graft of his defenders with a sweet point.

Over the closing minutes Tipperary did enough to hold on with Conor Sweeney’s final point coming in between late Offaly points from Conor McNamee (the third brother to get on the scoreboard) and from Peter Cunningham.