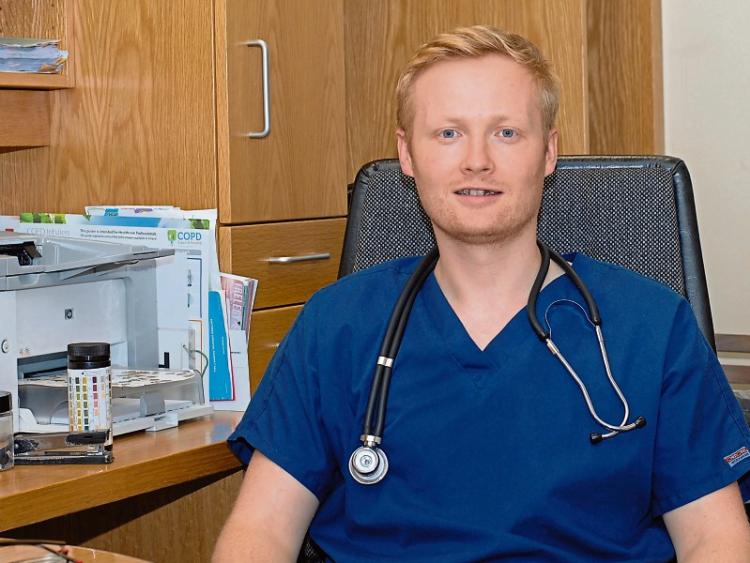 Almost eight months on from when the first case of Covid-19 was recorded in Ireland on February 29, 2020, there is still no sign of the worldwide pandemic abating anytime soon.

Having performed so well as a nation compared to many of our European neighbours in dealing with the coronavirus initially, the country is now back almost to where it started last April and May. The introduction of Level 5 last week following a recent surge in cases and deaths is a grim reminder to all - if one needed reminding - that what we are dealing with an invisible and deadly enemy here.

On the frontline in the fight against the pandemic is the medical profession, the hospitals, doctors, nurses, health workers. To the forefront at a local level nationwide are the General Practitioners who most often are the first port of call in dealing with  a virus that has significantly  affected them  in terms of  how they perform their duties compared to pre-Covid times, and in terms of  increased workload.

One such GP is Dr James McGrath at the Mary Street Medical Centre in Clonmel, who took time out last week from a hectic schedule to try and paint a picture as to some of the aspects of the medical profession that have been altered, at a local level at least.

“Since Covid and the restrictions coming in we mostly moved to telephone consultations within a period of  days. Since then we have been refining that system which allows people to be seen if they need to be seen. But if it is something that can be managed over a telephone consultation we will do it that way. That said, if someone needs to be seen they will always  be seen physically in person,” Dr McGrath reassured.

Back  in “normal times” -  which now seem to be drifting further and further into memory with each passing month -  the workload of a GP was always seen to be  demanding. In these unprecedented times that demanding work schedule has increased again. “Generally we would be very busy all the time. I would be booked out from 9am to 5pm or 6pm daily. And now due to Covid you would have a mix of in-person consultations and telephone consultations.  Sometimes that volume of calls would be so great that we would have the nursing staff  triaging to see if the patient met the criteria for either a referral for a Covid test or if they just needed some advice on how to manage their symptoms. If they needed to speak to a doctor then they could speak to a doctor,” added James. “The practice is open 9am to 6pm daily but my hours could be 9am to 7.30pm or 8pm every day depending,  except for a half-day on Wednesday. After 6 o’clock you could be still doing telephone conversations with those to whom you didn’t get to during the day. Also we would have paperwork, reviewing letters, reviewing bloods, doing prescriptions and emailing them to pharmacies, etc. And of course we do flu vaccine clinics from 5pm to 7pm in the evenings at this time.

“While there may be less footfall these days as we try to keep the waiting areas as empty as possible for obvious reasons, there is no doubt, these are very hectic  times for every GP,” added Dr McGrath.

“Of course, some people like to see the doctor face to face as this is what they are used to and then again there are a lot of older people who might not want to come in. This was the case we found initially when there was a lot of heightened  anxiety out there in the general public,” he said.

There is no doubt there does seem to be a lot of concern out there right now in the general public with the upsurge in new cases with the 26-counties averaging about 1,100 cases per day in the last few weeks.

“There is anxiety in the public at present. A lot of people would be worried. People would be worried about having minor symptoms. They don’t know that the symptoms for Covid vary in different people and you don’t always get the typical symptoms of cough, shortness of breath, fever. You don’t always have those symptoms and you can also have no symptoms. You might not be symptomatic at all, you might just have a headache or feel a bit fluey.

“But we always encourage people to ring if they have any sort of symptoms. We would not be turning people away or anything like that,” he added.

In relation to the whole area of testing at present, Dr McGrath explained: “At the minute the timeframe is increasing because there is such an increase in cases. People always ask how long they will be waiting and as GPs we cannot answer this as it is the HSE who  organise the appointment. Health Care workers are prioritised as are ‘at risk’ vulnerable people. We are talking 2-3 days now where before you could get an appointment even on the same day when the case numbers were lower.

“The test centres became so quiet that they stopped operating for a while in certain places. The Moyle Rovers centre closed and people had then  to go to Kilkenny to get tested,” he said.

Dr McGrath admitted that there were some issues currently regarding contact tracing and the dangers which that  creates.

“Public Health are overwhelmed with the contact tracing. People are now waiting longer to hear that they have been a close contact, to refer them to a test or to advise them what to do. In the meantime there is potential for people that have not been contacted to not  restrict their movements. GPs would like to see more in the media telling people that if they have symptoms or are a contact of a case then they need to restrict their movements, regardless of whether you are contacted by public health or not. If you are aware that you came in contact with a case then you need to restrict your movements,” warned the Clonmel GP.

While county Tipperary  as a whole has been doing well with case numbers, comparatively speaking - last week it was 60-120 cases per 100,000 of the population - there is no room for complacency either, according to Clonmel native James.

“The incidence rate here  has been good for sure but this can change very quickly if people get too relaxed and stop following advice and guidelines. I would advise  minimise your interactions with other people. Avoid large crowds of people. If anyone has symptoms they need to contact their GP. If you are waiting on a call back from the GP then you need to restrict your movements,” he said.

Young people have come in for some media criticism regarding their behaviour, some merited and some not so. But being a young man himself , Dr McGrath, was understanding of their plight and indeed everyone’s mental health at this time.

“Young people are getting a bit fed up with restrictions and that is the problem the Government have with balancing restrictions and keeping people’s mental health in check. During winter time it is hard for people, shorter days, less chance to get outdoors, etc. Older people are finding it hard also as they cannot meet their families and don’t really have an outlet for social interaction. And the same goes for people who live alone. The Government have brought in a ‘social bubble’ which allows you to pair with another house and at least you have some way of interacting,” said James.

“To try and stay as healthy as possible I would encourage people to exercise within the Government restrictions. Stay active – but at the same time limit interactions with other people. Make sure you are handwashing, wear facemask as opposed to face shield, etc.”

“It’s a bad period for everyone right now. Everyone is in the same boat and everyone needs to make sure they are looking after themselves and not putting the health system at risk with poor behaviour. We are all in this together. Hopefully people will be able to go back to some degree of normality for Christmas. A vaccine will be needed in the long run but that  will be the middle of next year, I wouldn’t say any sooner,” concluded Dr McGrath.