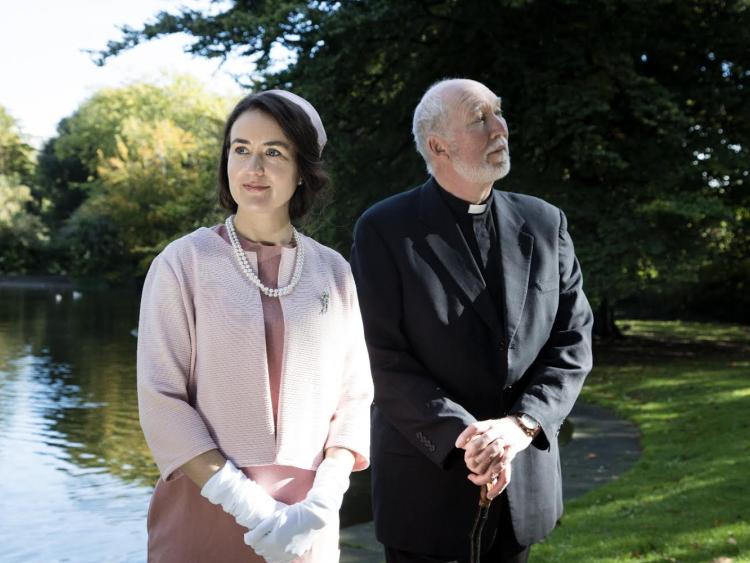 A triumph for the theatre world amidst a global pandemic was to relocate what was meant to be an indoor New Theatre production of ‘Jackie’, directed by Anthony Fox and written by playwright Gerard Humphreys.

Rain or shine, the show went ahead for audiences armoured with raincoats, blankets, cushions and umbrellas.

Situated at the Yeats Memorial in Stephens Green park, both actors and audience were delighted to be a part of a live performance, especially at a time when performance is so seldom found outside of the online realm.

Actor Michael Judd and Amy O’Dwyer, playing role of Chaplain and Jackie, commented that the sudden change of setting turned out to be quite a serendipitous location for the play.

Spanning from Jacqueline’s initial visit to Ireland in 1951, to the assassination of JFK, the play makes frequent references to some of Dublin’s most iconic sites, such as Phoenix Park, Leinster House, and of course, Stephens Green.

The combination of beautiful botanic scenery and distant urban mumblings made for an ideal setting.

Judd himself acknowledges this by saying; “It’s amazing, you never stop learning as an actor. I remember my acting teacher in New York telling me you have to use all of your surroundings. I was looking up at the trees, pointing in the direction of Leinster House, the Yeats statue when I reference Jacqueline reciting his poetry in Newman House.”

Not only was the play’s location a novelty for cast, it was also clear that audiences were far more immersed in the narrative, with some reminiscing about the real life visit made by Jacqueline Kennedy to Ireland.

This was perceptively noted by actor Amy O’Dwyer when she said that “for some people, it’s history, but for others, it’s living history. There are people in the audience who still remember where they were when JFK was shot. A whole spectrum of audiences are touched by this story.”

If anything, the change of location only highlighted the realness of ‘Jackie’ by taking place only a few meters from places in Dublin she once visited.

The question however remains, will this pandemic spark a new wave of outdoor theatre?

What our experience of this production taught us about performance and space is that it can, in actuality, happen anywhere. We knew of and actively availed of this fact far before Covid19 called for re-imagining and re-working.

At a time when theatre, music, nightlife and creativity feels as if it’s back’s against a wall, ‘Jackie’ served as a beacon of hope for those in the arts who find, like most, that zoom performances and video uploads just don’t cut it.

Undeniably it is a challenging time for the arts, and with cases rising there is no predicting what restrictions will allow for in the future, but having successfully ran a two week outdoor show in Irish weather, one might hope that unpredictability mightn’t be as much of a hurdle as we initially thought.