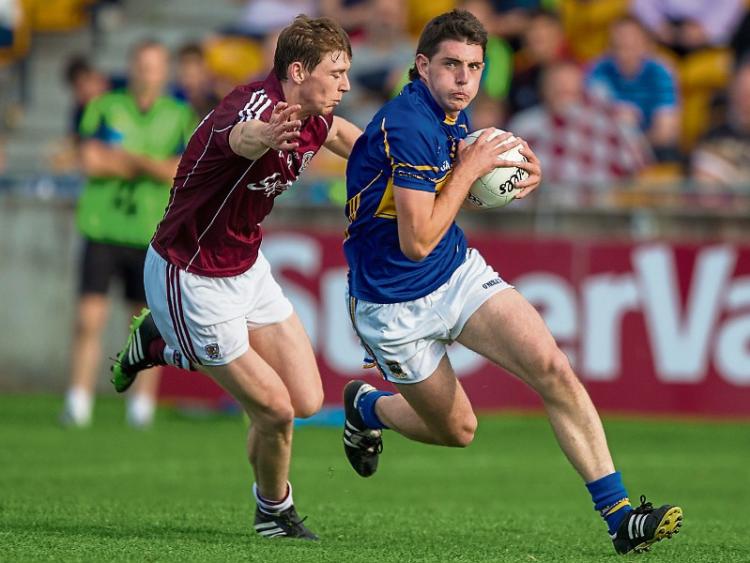 Colin O'Riordan in action for Tipperary against Galway at O'Connor Park, Tullamore, in the 2014 Senior Football Quarter-Final.

Tipperary senior footballers received a major boost on Tuesday when it was confirmed to the County Board that Colin O’Riordan had been granted permission by his club, Sydney Swans, to play in the Munster final against Cork on Sunday week. O'Riordan is currently in pre-season training for a return to New South Wales in the coming weeks.

The former JK Bracken’s player was regarded as one of the finest prospects in Gaelic football before signing professional terms to play Australian Rules in late 2015 – his loss to the game in Ireland lamented by all but particularly by his home county.

As a 16 year-old O’Riordan was a member of the Tipperary minor team who defeated Dublin in the All-Ireland final of 2011 by 3-9 to 1-11, a Tipp team managed by David Power, the current manager of the senior team. That 2011 minor panel also included today’s teammates in Evan Comerford, Steven O’Brien, Bill Maher, Michael Quinlivan, Colman Kennedy and Jason Lonergan.

Interestingly from that same team Seamus Kennedy, John McGrath and John Meagher are currently with the Tipp hurlers.

In 2015, in his last year playing for Tipperary, O’Riordan was captain of the under 21 team that reached the All-Ireland, along the way defeating Cork in a Munster final in Thurles, Dublin in the All-Ireland semi-final before losing the decider to Tyrone by a single point at Parnell Park in Dublin. That team was managed by Tommy Toomey of Arravale Rovers.

Colin O’Riordan was introduced to the Tipperary senior football team during manager Peter Creedon’s tenure.  In that time the Templemore prodigy was developing into one of the game’s top midfielders before his talents were quickly spotted by Australian Rules scouts, his ability in the air an obvious attraction for the game down under. O’Riordan came on as a sub in the 2014 League final win against Clare at Croke Park and also started in the All-Ireland quarter-final defeat to Galway the same year.

Tipperary were obviously hoping that this news wouldn’t break until nearer the final but on Wednesday last were forced to confirm, expressing “we are grateful for Sydney Swans for allowing Colin O’Riordan to play on Sunday week vs Cork. He has been with the group a number of weeks now, so it is great to have a player of his calibre available for selection.”

With midfielders Steven O’Brien and Jack Kennedy nursing injuries at present, the addition of O’Riordan to the panel will be a significant boost in that area that Cork like to target, but also a huge morale booster to the whole panel ahead of the big game. Whether O’Riordan will start or not remains to be seen, but he has been training with the panel for weeks. As far back as the league game v Offaly at Semple Stadium on Sunday, October 18, he was working the sidelines vociferously shouting encouragement to his teammates in their victory over ‘The Faithful’.

His return adds an extra dimension to the final in Páirc Uí Chaoimh on Sunday week when Tipperary will be hoping to bridge a gap back to 1935 since they last won the provincial title.