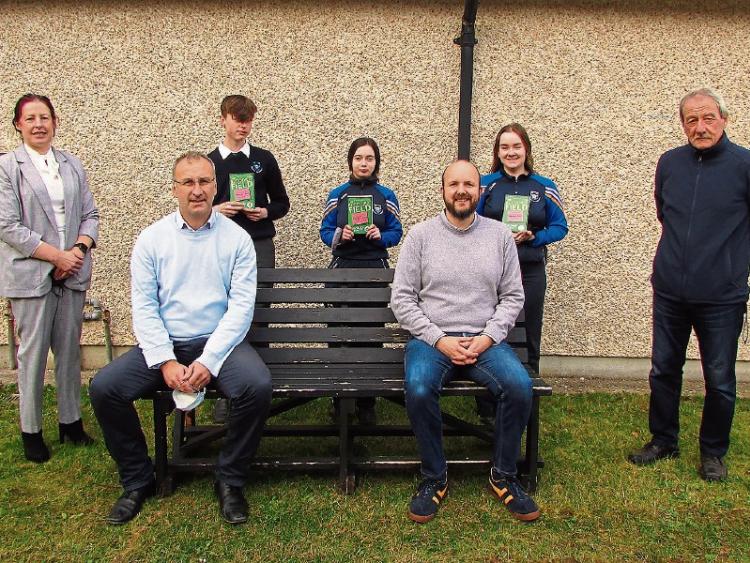 Coláiste Dun Iascaigh in Cahir was honoured last week as on Friday, November 13 they had award winning sports journalist and author Michael Foley in to talk to the students about his new award winning book; ‘The Bloodied Field’. The book is based on the events of Bloody Sunday, 1920.

Michael was kind enough to sign some copies of the book for students and  staff.

Just 18 days short of the 100 year anniversary of Bloody Sunday the author of the fabulous book ‘The Bloodied Field’ and producer of a podcast of the same name recounting this eventful day visited the Coláiste to present signed copies of his book to the three students.

Transition year students Sophie Darcy, Kaitlin Power and Amadeusz Grzybeknce under the guidance of their teacher Miss. Trehy submitted research projects on ‘Bloody Sunday’ to Colm O’Flaherty along with others from their TY class.

Their projects were selected for recognition from a large number as they focused on accuracy of fact and included interesting detail on this eventful day during the War of Independence.

At the presentation Colm O’Flaherty thanked Enda O’Sullivan for adjudicating on the projects. Enda is Secretary of the County Tipperary ‘Bloody Sunday’ Committee, also PRO of the County Football Board and a history teacher in  Wexford.

Colm spoke about Jimmy McNamara the local man from Cahir who played in the forwards for Tipperary that fateful day but in previous years had turned down a professional soccer contract with Glasgow Celtic.

Colm had our Fifth and Sixth Year History students in the palm of his hand as he recounted Jimmy McNamara life story and that of others who played for Tipp on that day. Michael Foley complimented the teachers and students of history in the school and spoke about the importance of seeing history more in the context of the people and their lives rather than in facts and dates.

Michael was passing through Cahir on his way to Dublin where he later spoke about ‘Bloody Sunday’ on the Late Late Show. He explained that his research for his book has been ongoing for over 10 years where obtaining reliable sources of information was vital in writing his book.

Michael was grateful to Colm O’Flaherty for presenting him with rare pictures related to events of that time and the Coláiste they look forward to inviting Michael back to the school at a further date for a more detailed lecture.

In the coming weeks further events will take place across the country commemorating the challenge match that took place between Tipperary and Dublin that lead to the deaths of 14 people who attended the match amongst a crowd of 15,000.

The documentary ‘Bloody Sunday 1920’ aired on RTE on Monday night was based on Micheal Foley’s book ‘The Bloodied Field’ and Michael played a huge part in its production.