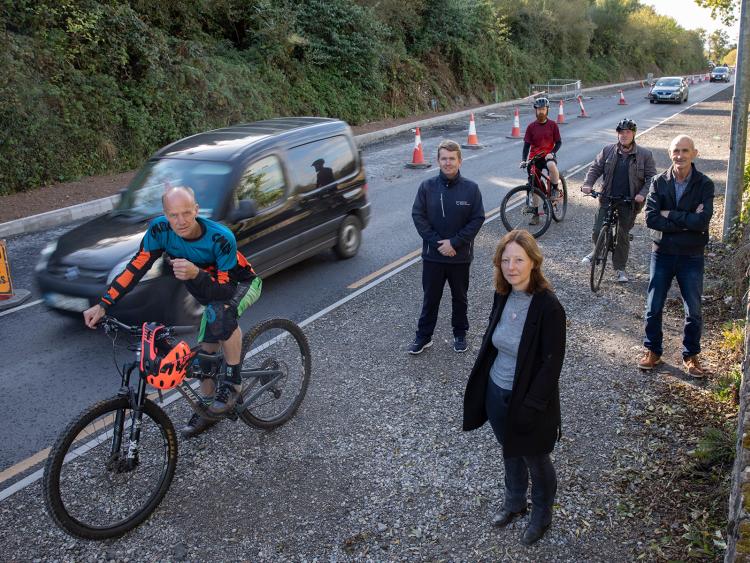 Efforts by campaigners are being stepped up to try to pressurise Waterford County Council to amend the roadworks at the Fingerpost at the
Dungarvan Road outside Clonmel to take account of cyclists safety before construction is finalised.
The Nationalist reported on October 22 that safety concerns about the new road had been raised in June of this year by locals when they realised that no provision in the design was being made for bicycles.
This led to a meeting on 20 October 20 between elected representatives Michael Murphy, Seanie Power, the engineers and community members where these worries were discussed but with no decision reached in relation to the fitting of separate cycle lanes.
Since the meeting, concern has increased amongst road users, especially cyclists, that the narrow dimensions of the new road, allied to the raised concrete kerbs leaves insufficient space for safe sharing of the road by vehicles and bicycles. Questions have been raised as to how vehicles overtaking cyclists will be able to obey the Road Safety Authority recommendations to give them adequate space.
The campaign group are especially alarmed at the potential for accidents involving trucks and cyclists. They quote statistics showing that 57% of cyclist fatalities involve HGV’s.
This is due to the width of these vehicles allied to poor visibility leading to crush incidents.
They note that the commonest reason given for people not using bicycles is the perception of danger.
Gev Barrett, founder of the Clonmel Cycling Network has been compiling responses to the new roadworks on the group’s Facebook page and reports that there is widespread dismay that the new road misses an opportunity to improve safe cycling access for commuters, school children and leisure cyclists.
GATEWAY
The Fingerpost road is the gateway to the Nire Valley, Careys Castle and other key amenities as well as accessing the Pinewood estate and other residential settlements nearby.
He says that contributors to the online discussion are asking how the authorities can claim to be supporting sustainable transport and tourism while building an old fashioned roadway with no cycling provision.
Theresa Jones from the Pinewood estate residents association supports the campaign and is convinced that joined up walking and cycling infrastructure would have a huge community benefit and allow people of all ages to access Clonmel and the nearby woodlands and hills without needing to drive.
Martin Browne, Sinn Fein TD visited the Fingerpost last week and agreed that the new roadworks miss an opportunity to facilitate safe cycling and he also wanted to know what safety analysis was carried out at the design stage to ensure that there was room for bicycles. He intends to raise the matter in the Dail this week as a Parliamentary Question.
He is very concerned that if the final surfacing of the road and footpath is laid then it will be difficult and expensive to fix the problems later.
Mattie McGrath, Independent TD has also raised the matter with Waterford Co Council and arranged a further online meeting this week with the engineers to address the concerns about the road design.
It is also understood that Marc O’Cathasaigh, Green Party for Waterford has had discussions with senior officials in Waterford Co Council on the matter.
“I would very much like to see cycle lanes added to the R665 immediately outside Clonmel leading towards Dungarvan. This is a busy route and is well used by cyclists. The government has committed to spending €360million per year on active travel and a project like this falls under that. I know that stretch of road well as a cyclist and think that cycle lanes on both sides of the new road would provide a safe option for all road users,” he said.