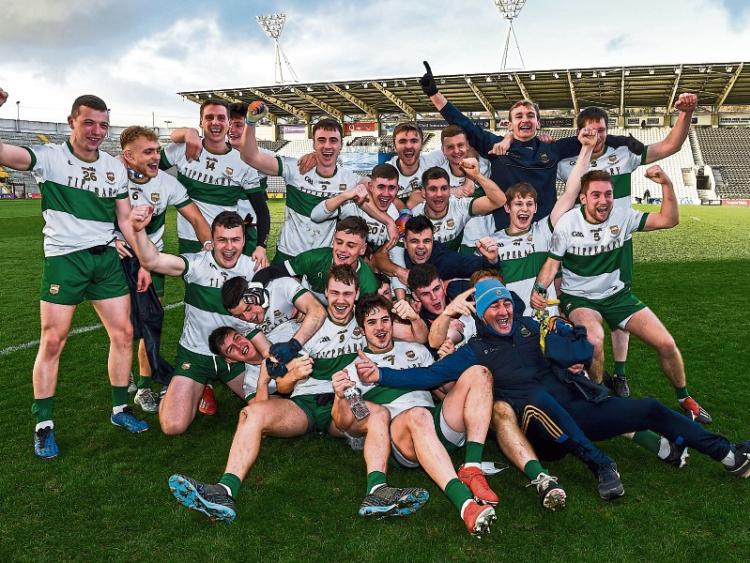 Yes, the long gap all the way back to 1935 has finally been bridged by an heroic column of 20 footballers on what has been an emotive and appropriately celebrated weekend for the Gaelic Athletic Association.

One hundred years plus one day on from Bloody Sunday, a day forever synonymously etched with Tipperary football, the footballers of today prevailed to indelibly write themselves forever into Tipperary GAA folklore.

If ever there was a day to do it, and while sporting commemorative green and white jerseys in honour of the fallen hero of 1920 at Croke Park, Michael Hogan, this was the day. To their credit, Conor Sweeney’s men did exactly that, heroically, and deservedly so.

In 1987 we stood on the grassy banks in a packed Fitzgerald Stadium in Killarney to watch Tipperary hurlers prevail in a Munster final. On that day captain Richie Stakelum famously cried out that “the famine” was over after our replay victory against Cork. Those never-to-be-forgotten hurlers had waited 16 years to reclaim the provincial title on that sunny Sunday in July that to this day is sweetly recalled from Carrick-on-Suir to Portroe and everywhere in between.

If that gap from 1971 to 1987 constituted a famine, what the Tipperary senior footballers ended today was more than five times longer, it was the mother and father of all sporting famines. It is now finally consigned to its rightful place in the history books. For all Tipperary people today will go down in sporting history as being one of those never-to-be-forgotten moments.

Tipperary got off to a great start in today’s Munster final in Páirc Uí Chaoimh, the rank outsiders three points to the good inside four minutes with two points from captain Conor Sweeney, including a mark after 35 seconds, and another from Michael Quinlivan after a pass from clubmate Kevin Fahey, one of the stars among stars on the day.

Cork, who had stunned Kerry just two weeks earlier in their semi-final, finally began to settle and were quickly back on terms with three unanswered points, one from play from Luke Connolly followed by a pair of frees from Connolly and Mark Collins including two frees tieing up the scores after seven minutes of a lively opening.

The combatants went point for point after that, level at four, five and six apiece with little to separate them.

In that period Tipp’s points came from a Sweeney (2), one a free, the second an excellent effort helped in creation by Colman Kennedy followed by a mark from Liam Casey after a move involving Kevin Fahey and Steven O’Brien. Cork’s points came from Luke Connolly (45 and a free) and from centre-forward Colm O’Callaghan who finished a flowing move.

Tipperary then kicked on with a mini purple patch - and perhaps the thrust that ultimately won them the title - with four in a row towards the end of the first half. 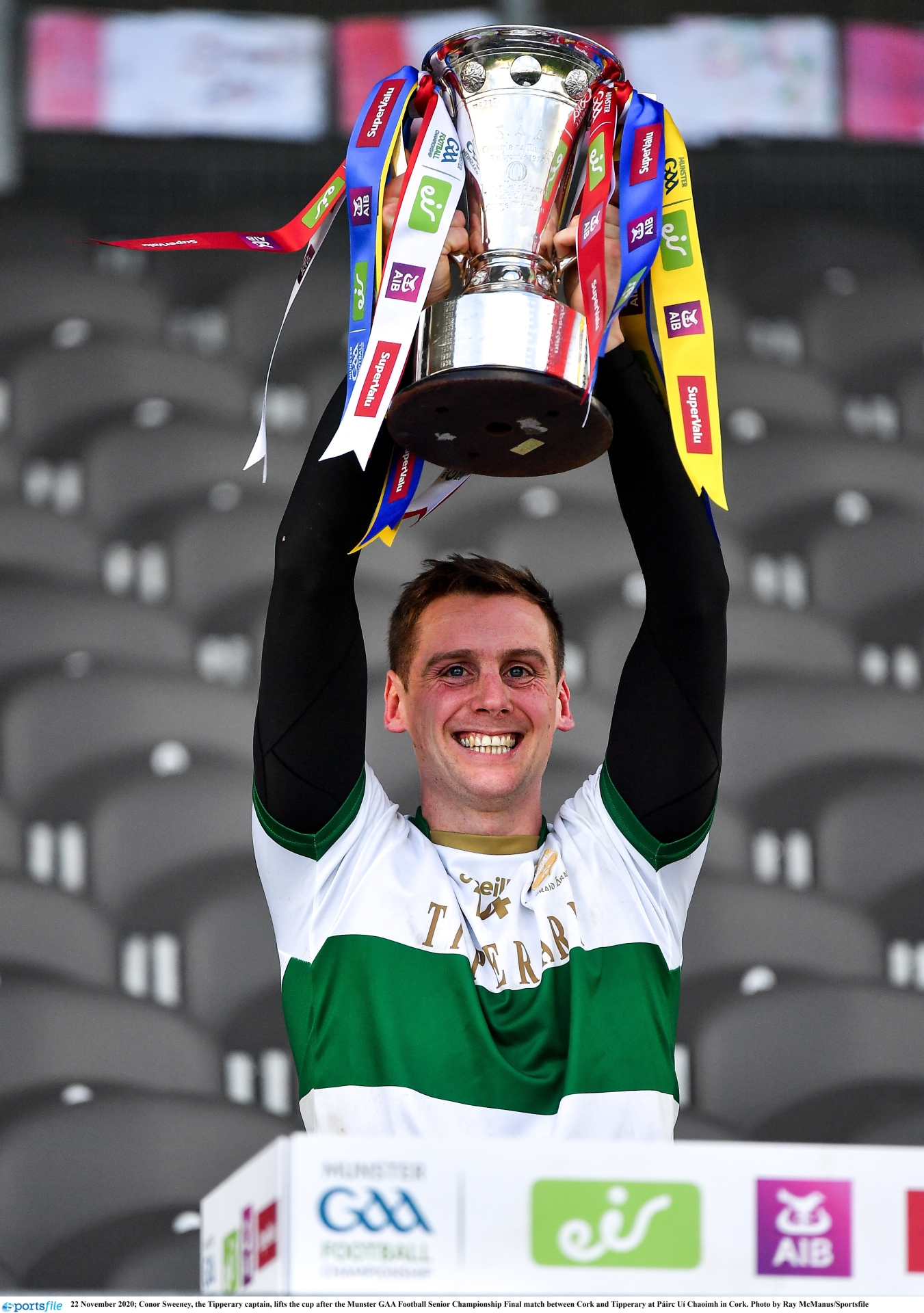 Colin O’Riordan, who played a hugely influential part in his first game back by kind permission of the Sydney Swans, won a free which Michael Quinlivan kicked off the ground and over. The 2016 All-Star followed that up with a beauty of a point from out near the right sideline - MQ who always produces his best on the big days was having his finest game in quite a while. Two further points from a Conor Sweeney free and a well-finished Kevin Fahey point had Tipp 0-10 to 0-6 in front by the 34th minute.

A John O’Rourke point stemmed that tide briefly for Cork before Michael Quinlivan with his fourth point of the opening half sent a magnificent effort through the uprights after a fine move up the left wing.

Tipp went to the break leading 0-11 to 0-7 and had given themselves every chance of causing a major shock with a four points platform.

Cork returned for the second period without the influential Luke Connolly who had kicked four of their first half tally, no doubt it was a major setback for them having started without Sean Powter also.

Within 40 seconds Steven O’Brien’s run created a mark for Conor Sweeney which he duly kicked to stretch the lead to five.

A minute later Liam Casey and Tipperary had the ball in the back of the Cork net, but were unlucky to be denied the score for a “square ball.” In the build-up to that incident a Steven O'Brien fisted effort thundered back off the crossbar.

After Tipp’s opening point of the second half they weren’t to score for the remainder of the third quarter but in that period Cork could only muster a brace of white flags from a Mark Collins free and a Brian Hurley point - the dangerous full-forward well contained by Tipp’s Alan Campbell.

At the second half water break the margin was still three points with Cork going through their subs quickly in an effort to wrestle the initiative from David Power’s side.

Liam Casey’s second point of the day came in the 52nd minute and was sweetly finished off his left left. This came after good work by Liam Boland and Conor Sweeney before Bill Maher in a lung-bursting run joined the move to outflank the Rebel rearguard and gave Casey his chance. It was quickly followed by another point from Sweeney after Quinlivan found him with a ground pass and the Ballyporeen man did the rest.

Cork were in deep trouble now, five down and with 14 minutes left on the clock. It brought Tipperary followers anxiously back to last February when ‘The Rebels’ stole a league victory in Thurles from Tipperary with three goals. Now, if Tipp could avoid giving away a green flag nothing would deny them their long-coveted Munster senior title.

Cork did have the next three points though, two frees from Mark Collins and another from play by Sean White, in which they nearly carved Tipp open for a goal chance. Thankfully it didn’t happen.

Back to just two points again at 0-14 to 0-12 and with six minutes plus added time (five minutes) to play, Tipp’s backs were to the wall.

Up jumped Colin O’Riordan to take a ball and win a free, duly converted by goalkeeper Evan Comerford and another followed when a poor Micheál Martin kick out was seized on by Michael Quinlivan. MQ’s effort at a lob landed on the crossbar and over. Had it gone in it would have finished Cork and perhaps brought down the Government too - the Taoiseach’s son the Cork custodian.

Incredibly an economically efficient Tipp forward line who kicked just three wides in the opening half, had their first of the second period four minutes from time, an exhausting run by Bill Maher didn't get the reward his effort deserved.

Cathail O’Mahony’s 69th minute free for Cork had the game back to a single score when he popped over a free from 45 metres to keep Tipperary on tenterhooks. 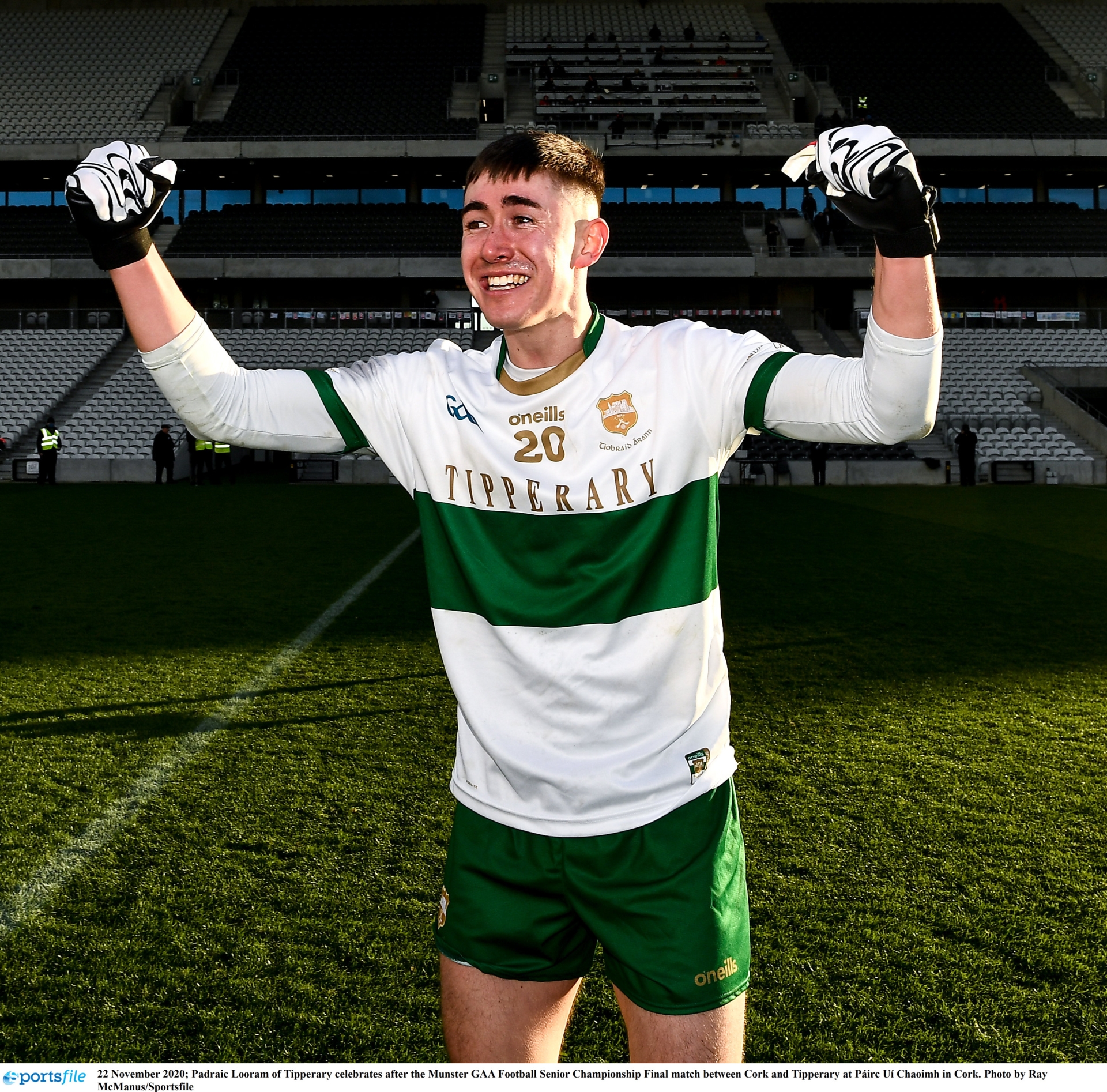 The Premier’s  insurance point arrived in added time, the longest-serving panel member Philip Austin, who was just on the field, reacted quickest to a ball down off the upright from a Comerford 45 to put Tipp four up. And while Cork had the final score of the final from John O’Rourke, Tipperary were not to be denied on the day and held on for history.

Today is not the day for individuals, even if there were some outstanding - and perhaps All-Star nominations among them. This was the performance the manager demanded and got. This was heart and soul stuff, non-stop workrate and commitment from 1 to 20 that was needed and was provided in spades. This was the never-say-die attitude of real men even on a weekend when they honoured a dead hero. This was Tipperary football at its finest, an 85-year multi-generational wait ended. This was history.

So well done to everyone who crossed the white line to contribute - and those who didn't tog on the day -  and to the extended backroom staff including manager David Power, Paddy Christie, Joe Hayes, Charlie McGeever, Tommy Toomey and others who have all played their part in this magnificent day.