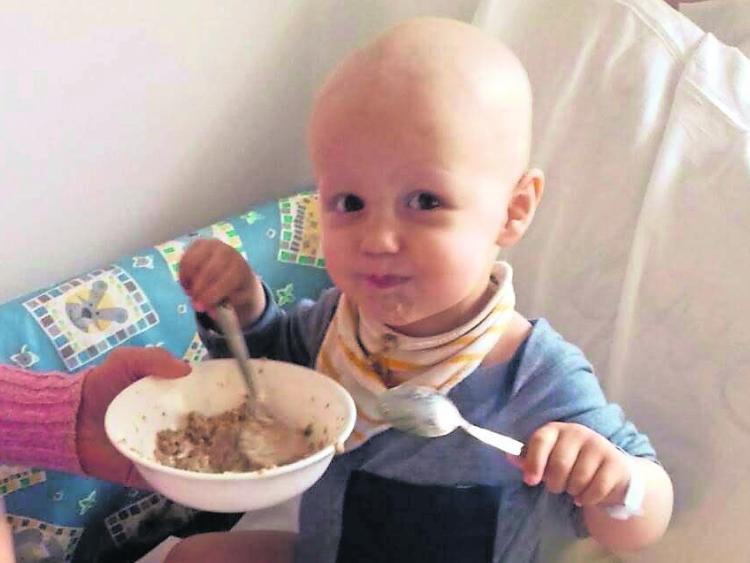 Tipperary friends of a Limerick woman are appealing for help this week to raise funds to send their friend's three year old son to the United States for treatment.

Theo Murnane is only three and half-years-old. Already, the boy from Murroe has had a tumour removed; gone through numerous rounds of chemotherapy; a double stem cell transplant; fourteen rounds of radiotherapy; six rounds of immunotherapy and serious infections.

Mum, Eleanor said she has come scarily close to losing him, but Theo has defied all odds and battled through it."He is just about to finish his last round of immunotherapy, after which we are hopeful for a clear scan. Theo is only three and has been in treatment for two and a half years.

"Unfortunately, with the type of cancer that Theo has, the chance of re-occurrence is extremely high. We now need help. As Theo’s mum, I am asking you to help me get Theo on a clinical trial at Memorial Sloan Kettering Hospital Cancer Centre in New York.

"This trial will help prevent the cancer re-occurring and greatly improve Theo’s chances of survival. Theo deserves a long, healthy life free from pain and fear. I have to do everything in my power to make sure he gets this. We need to raise €375,000. Time is not on our side, as Theo needs to be in New York by January 2021, so we urgently need your help," wrote Eleanor on the Team up for Theo GoFundMe page.

Just four days ago into the appeal over €84,000 has been donated."I am in complete shock. I want to thank people from the bottom of my heart. He has been through the absolute mill so I just want to give him ever waking chance by getting him on that trial in New York," said Eleanor.

Theo arrived - a much longed for and healthy baby - on April 27, 2017.  On Wednesday, May 16, 2018, two weeks after his first birthday, Eleanor took Theo to her local GP after she felt a lump in his lower abdomen and was concerned that his belly was quite swollen.

"We were immediately sent to University Hospital Limerick where they found a large tumour in Theo’s abdomen. He was taken by ambulance to Crumlin Children’s Hospital, Dublin, where he was diagnosed with Stage 4 high-risk neuroblastoma, a cancer that had spread to his bones and scalp. By Saturday morning, he was having chemotherapy and our world had fallen apart," said Eleanor.

Since then, Theo has had his tumour removed and gone through numerous  rounds of chemotherapy, a double stem cell transplant, fourteen rounds of radiotherapy and six rounds of immunotherapy. He has suffered setbacks along the way, including two very serious infections which had him admitted to intensive care.

"The last two and a half years have been incredibly tough, especially as a single parent. I have learned first-hand how precious life really is and how quickly it can all be taken away. I will be forever grateful for the love and kindness from people who have sent thoughts, prayers and good wishes, even those we’ve never even met. And, of course, we are forever indebted to the wonderful staff in Crumlin Hospital and University Hospital Limerick, who have become like family to us."

Eleanor thinks the hardest part of cancer treatment is at the end, when everyone assumes you’re cured and you no longer need their help.

"This isn’t true. Believe me, this is when you’re at your absolute weakest. I have laid my child in a surgeon’s arms and spent Christmas keeping watch over him in ICU. I have slept upright in a hospital chair and listened to the beeping of machines. I have smiled through the tears and found strength when there wasn’t any left.

"I have done it all for Theo, who is at the end of the day just a very normal, very precious boy, full of mischief, quick to smile, and a big fan of Tractor Ted and Paw Patrol. Today, I need my friends and community to help me give Theo the best future he can possibly have.

Thank you from the bottom of my heart, she says.