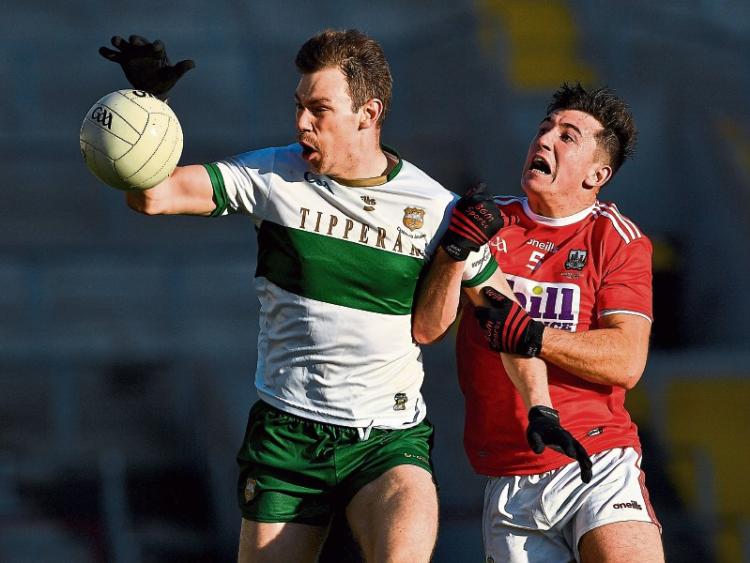 The power of Liam Casey is captured in this photo with Cork defender Tadhg Corkery under immense pressure in trying to contain the Tipperary midfielder during the Munster final.

Looking ahead to Sunday’s All-Ireland senior football championship semi-final between Tipperary and Mayo at Croke Park, Cahir’s Liam Casey took time out to give his views.

Experienced Tipperary midfielder, who incidentally is  one of just two  Tipperary men with two Sigerson Cup medals - Jimmy Feehan the other - is under no illusions about the huge obstacle that stands before Tipperay on Sunday, in their quest to reach the holy grail  of an All-Ireland football final.

“Mayo of course are always in the semi-final/final stages of the All- Ireland, and there is an obvious reason for this. They always have incredibly talented players and as a predominantly football county, they have a rich heritage. They are a strong, well integrated team , with lots of threats throughout.  You have the likes of the O’Connor brothers and Aidan O’Shea, amongst others, and they have also embedded a lot of youngsters from their under 21 All-Ireland winning team, along with some completely new faces. Anytime we have come up against Mayo it has been a good battle, but they have gotten the better of us on the last two championship occasions in recent years.

“However, it will be 15 v 15 on the day, like any other day, and you never know what might happen,” added Liam, who just remembered -   and was happy  to point out - that fellow Cahir legend and former Tipperary manager, Colm O’Flaherty, is on that Tipperary shortlist of Sigerson Cup winners.

According to Liam there are plenty of positives  for Tipperary to work on this time around and he is very happy with their form of late, which includes five wins on the spin since October, against Offaly, Leitrim, Clare, Limerick and Kerry.

“Our backs have been incredible so far this year. They are all well capable of taking on the job and holding their own against Mayo. We will have to work as a unit again but perhaps even harder than  we did in the Cork game, if that is possible.

“Also I feel that there is a more experienced set-up there this time around, and the lads who  played in that semi-final four year ago against Mayo will have it to stand to them on Sunday  in Croke Park. 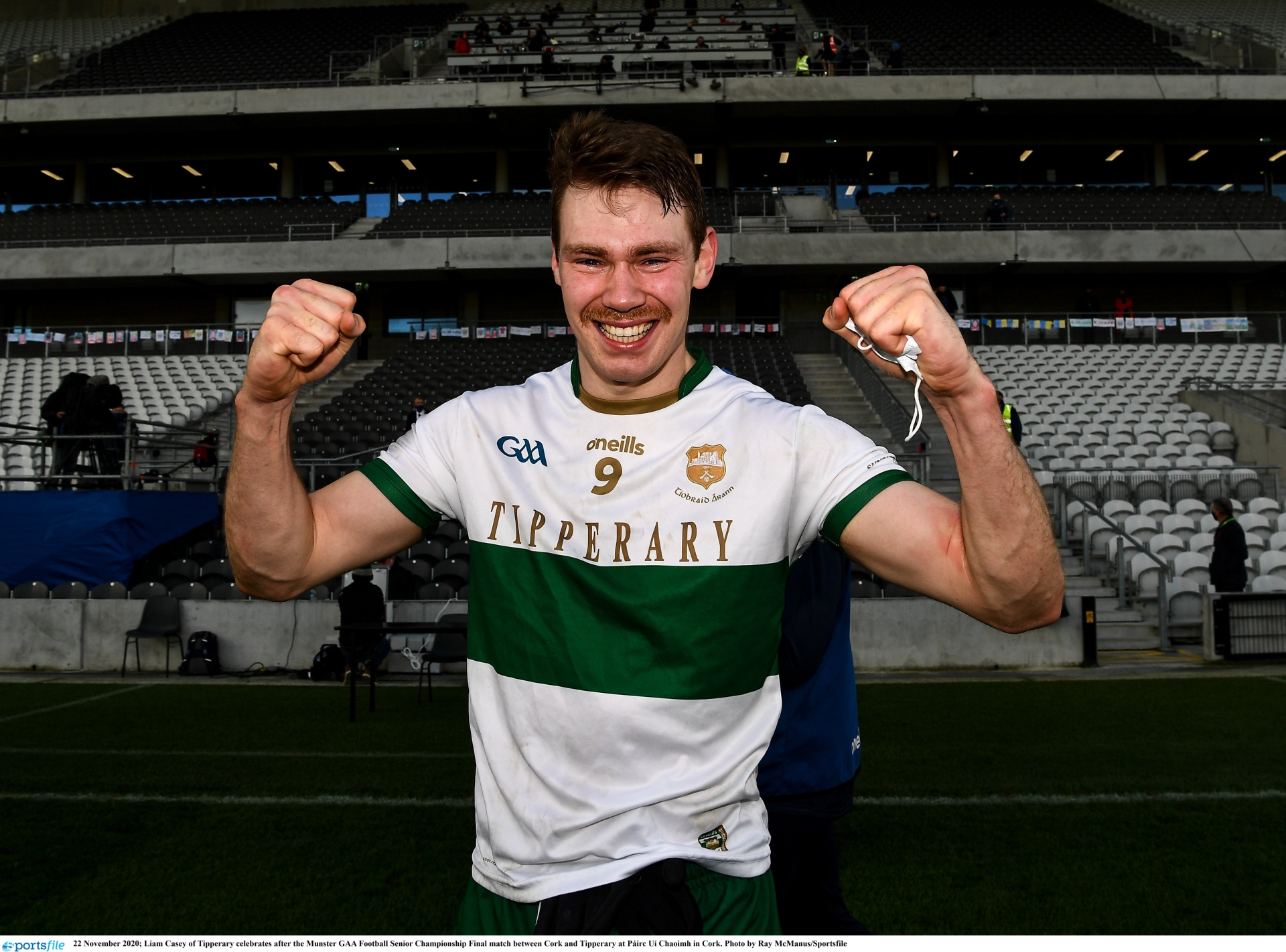 The smile of satisfaction! Liam Casey savours the spoils of victory having played a huge part in Tipperary’s first Munster final success in 85 years with the win over Cork at Páirc Uí Chaoimh on Sunday week last.

“Along with this, we have guys who have played on other big occasions in club, county and college teams in recent years, and all that counts for experience. But every game this year has been a big game in itself , all competitive due to the weight it held in holding our status in  Division 3 of the league and then straight into  the  knockout championship matches in Munster,” added Liam,  the holder of an under 21 Munster medal, a Division 3 National League medal and, of course,  now, a most-coveted Munster Senior Football Championship medal.

Four years ago, Tipperary made their way to the Croke Park semi-final via a very circuitous backdoor tour including a Munster semi-final win over Cork (their first in 72 years), a provincial final defeat to Kerry, before qualifier victories over Derry and Galway leading up to the Mayo semi-final.

On this occasion, for the first time in 85 years, Tipperary  arrive in Croke Park  as unbeaten Munster representatives. This momentum augurs well for the team according to Liam, who works as a business development manager for DoneDeal Agri, Plant and Motor.

“You just cannot beat winning matches. Once you learn how to grind out victories , you will succeed in games where you thought it was not possible to do so. We are lucky that there is serious competition for places and it is  very healthy and everyone is chomping at the bit to get into the 26-man panel on match day,” he said.

The big thing now for Tipperary is to try and  go that one step further this time and to get back to an All-Ireland final for the first time since 1920, and the opportunity that Sunday presents for that to happen must be a huge incentive for everyone involved, manager David Power, captain Conor Sweeney, and all the panel.

“Yes, of course we would relish the opportunity to get to the final but we have to focus on the task ahead against Mayo, we cannot and we won’t overlook this at all.

“Mayo are a team that have played in numerous finals to date and have been fierce unlucky in a number of encounters. We will be underdogs as always going into the game, however it is fantastic to have the opportunity to play in an All-Ireland semi-final and we are not looking beyond that from a total focus point of view.

“We know what kind of performance will be needed from our 26 men on the day. There  is no big surprise that Mayo will be hot favourites, but if we perform on the day you’d never know,” added Liam.

Finally, being the ever-proud Cahir man that he is, Liam wasn’t forgetting the other team who wear white and green.  “My club, the win was for them too, and there are too many to mention and thank, but they all know who they are. But one man who has devoted so much towards Tipp and Cahir GAA over a lifetime has been Eddie Lonergan. I can only imagine what that big win  meant to himself,” concluded Liam