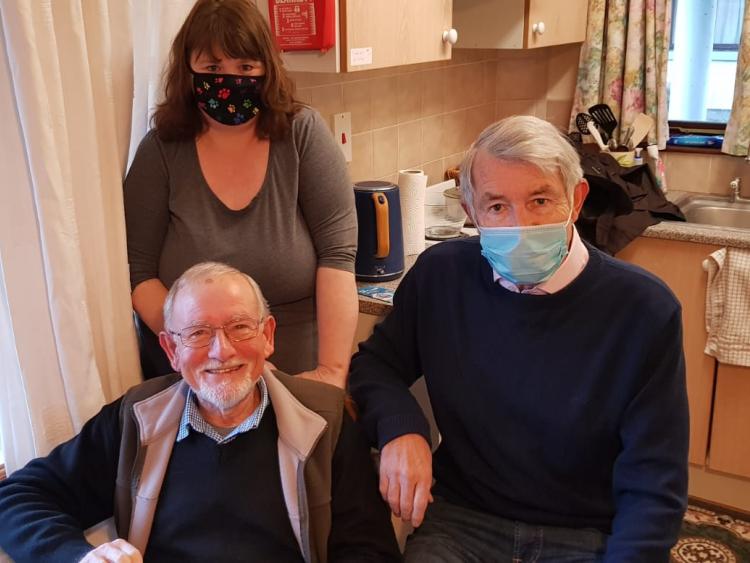 We all love a happy story. At Christmas we love them even more, especially if they bring joy and fulfillment to someone’s life.

This story began a month ago when a new resident came to the Sue Ryder House in Holycross.

Michael Egan had returned from the UK bringing with him as much of what he owned as he could manage. However, he had to leave his much loved typewriter behind.

A kind volunteer at Sue Ryder House, Kate Ryan, was chatting with Michael and he told her how much he missed his typewriter. One of his favourite pastimes is writing poetry, and he had used his typewriter to do so for many years.

Kate immediately decided to try and help him. She contacted Michael Lowry and an appeal was posted on his Facebook page. The response was instant and overwhelming. People began to search through attics, storerooms and offices to find a typewriter for the newest Sue Ryder House resident.

Many were found and willingly offered, but most had been in storage for years and ribbons had dried out and replacement parts were no longer available.

It seems that a functioning typewriter is not an easy find these days! Meanwhile, Deputy Lowry’s Facebook post had made it way across the water to Britain, where it was spotted by a wonderful couple.

Walid and Joujou run a business called Mr and Mrs Vintage Typewriter in Milton Keynes. They lovingly repair and restore old typewriters and make them good as new again.

Walid and Joujou were so touched by the appeal that they made contact immediately with Deputy Lowry and Michael Egan’s wish began to come true.

Not only did Walid and Joujou offer to source and restore a suitable typewriter, they also provided it free of charge and covered the cost of having it sent to Ireland. They even typed a personal note on the typewriter to its new owner telling him of how honoured they were to help!

On Saturday last Deputy Lowry handed over the county’s most famous typewriter to Michael.

“It was a really special moment,” said Deputy Lowry. “His eyes shone with happiness, not just because he now had a typewriter, but because of the kindness he has been shown since he arrived at Sue Ryder House.”

Kate Ryan, who had turned a simple conversation into a wish come true, was present and lots of photographs were taken to share with Walid and Joujou in Milton Keynes.

The two Michaels enjoyed a chat with Deputy Lowry enthralled to hear the story of Michael’s life.

“He is an amazing, articulate and fascinating man.” said Deputy Lowry. “It was a privilege to spend time with him.”

Sometimes it’s the small things in life that mean the most. A kind word, a smile or a helping hand can bring untold happiness to another person.

Thank you to everyone who responded to the appeal for a typewriter for Michael. Every single gesture of kindness is deeply appreciated.

Every offer of help played a part in bringing about this happy ending and prove, beyond doubt, that little things really do mean a lot.