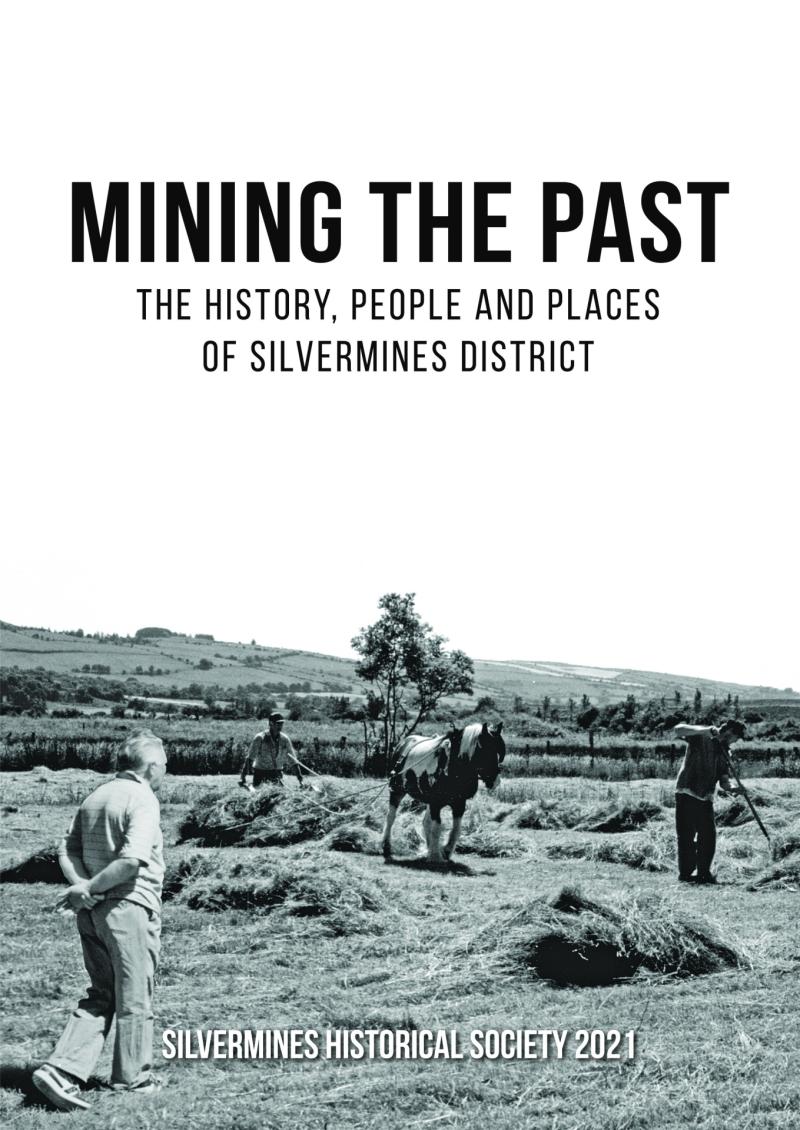 Paddy O’Brien and his neighbours Mossie and Stephen O’Brien pictured on the cover of Mining The Past The History, People and Places of Silvermines District saving the hay in Shanahool in 1996

And never has that phrase - It’s often when we are far apart that we are closer together - been more apt than in this strangest of years.

For Mining the Past is bound to bring those near and far with the slightest connection to the parish closer together in realising the wealth of history that is in the area.

That history covers all walks of life and activities.

Indeed, the themes running running through this journal range from history to local people’s ordinary lives, to sport, crime, traditions, the economy, farming and even death.

The dark days of the War of Independence and its aftermath are covered in the very first article, A Hot August Night 1922, by Paddy Ryan (S), in which he recounts the burning of the local Big House, Kilboy.

Paddy describes the torching of the “jewel of mansions in the crown of North Tipperary” as a seismic event in the quiet, rural landscape of Barnagore.

While there are many theories as to why it was burned, there was no doubt in its owner, Lord Dunally’s mind that the family was being forced to leave its ancestral home.

That it was rebuilt is a tribute to people who travelled from throughout the country to work on its restoration.

History of a different kind is recounted by Maureen and Pat Steed in their recalling of the night the famous - or infamous - Pecker Dunne was brought to Silvermines Hall as a special guest at a local concert.

Getting the Pecker to Silvermines was one thing, getting him home was another, but it was not without what must have been a magical musical moment when he Pecker took their daughter Fiona on his knee and sang The Tinkers Lullaby to her.

“The sing song continued until 4.30am when he ran out of liquor,” they write.

There are many traditions surrounding death and funerals in Ireland, and the one recalled in Jim Egan’s article is the tradition of digging a grave in which neighbours and friends show their solidarity with the grieving family by helping the deceased on their way into the afterlife.

However, one of the saddest stories concerns the burial of an unidentified baby by three men in Ballinaclough graveyard on the night of July 7, 1876, while a woman waited nearby.

Witnessed by John Behan who was coming home after making hay, an inquest showed the infant to be about five days old. There is no record of a police investigation or where the infant was reburied, but a logical explanation is that the child was not baptised and the teachings of the Church at that time prevented it from being buried in consecrated ground.

Author Tim Boland muses that “perhaps, the night time burial in Ballinaclough took place out of an understandable desire for a Christian burial in consecrated ground for a dearly departed baby, allowing some solace to the family in its time of grieving”.

Maura McLoughney writes about how the granddaughter of Phebe Clark travelled from New South Wales, Australia, to find her grandmother’s grave in Ballinaclough.

The social fabric of an area can be measured through its industry and Silvermines is no different. Tim Boland traces the history of Ballinaclough flour and woolen mills from its establishment by the Normans in the 13th century up to its closure in 1918. He notes that the ingenuity of those early settlers married well with nature to drive on industry.

While the Norman immigrants were making a new life for themselves in Ballinaclough, Damian John Gleeson tells of the emigrants who forged a new life in New South Wales, many of them “bounty emigrants” who possessed the skills and mindset to try their chances in the new world, but, sadly, they would never see their homeland again.

Silvermines has a proud sporting history in hurling, and soccer, but few would be aware of the exploits of boxer Dennis Haugh, who became the first ever light heavyweight champion of Britain in 1913.

Authors Jim Egan and Gerry Haugh describe the life of the man from Killinaive and his metoric rise as “the stuff of fairytales”.

School and schooldays play a big part in Mining the Past, with Billy Feehily writing about his days at St Mary’s Junior Boys' School in Nenagh; Breda Grace has fond memories of Killeen National School teacher May Clifford, and Úna NÍ Coileáin writes about her father, historian, gaelgóir and man of the people Pádraig Ó Coileáin, founder of the CBS Secondary School in John’s Lane, Nenagh in 1926, union activist and former principal of Templederry NS.

But he was not just a teacher, he an active member of his local community where his legacy lives on.

Mining The Past is a page turning kaleidoscope of events and people that make up Silvermines and it is a tribute to the committee that for the past nine years they have imbibed us with fresh outlooks on their story, a story that no doubts mirrors so many towns, villages and communities throughout the island.

No doubt the tenth edition will bring forth new gems.

Mining The Past, The History, People and Places of Silvermines District is available in local bookshops.