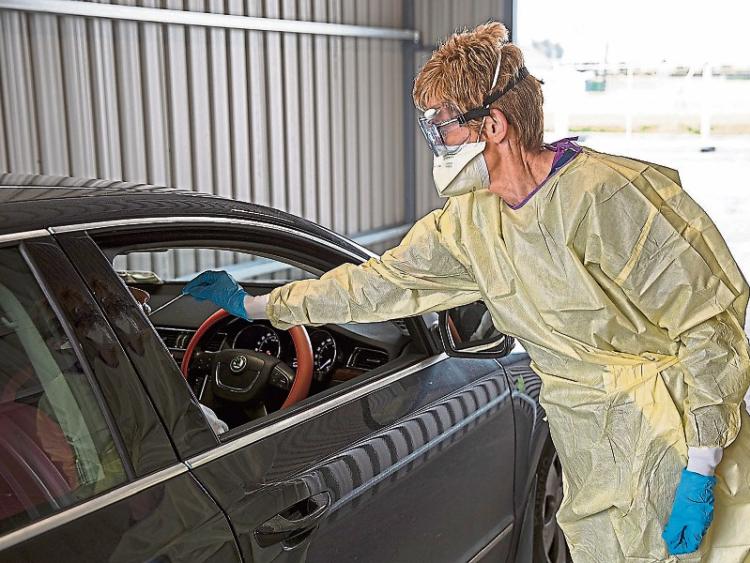 A nurse takes a swab from a driver at the Covid-19 drive through test centre which opened at the Moyle Rovers GAA grounds at Monroe outside Clonmel.

The following is a selection of the stories that were making the news in March 2020 in The Nationalist.

The first real impacts of the coronavirus pandemic that would grow to have a devastating effect throughout the world began to be felt locally in County Tipperary in early March.

Dignitaries from Clonmel’s twin town of  Costa Masnaga,  in the northern Italy coronavirus hotspot, pulled out of visiting Clonmel for  St Patrick’s Day.

The 21 member group from the Agrigento area of Sicily were due to visit the Clonmel Rotary Club.

That week, after the first case of the coronavirus was confirmed in Ireland, Clonmel doctor Mike Quirke  appealed for calm.

We reported that week that the ISPCA had seized a young pony that was tethered to an electricity pole without food, water or shelter in Clonmel.

ISPCA inspector Alice Lacey discovered the young filly in poor condition and on closer inspection, a scar was found on her back leg, which appeared to be infected.

Inspector Lacey said: -   “The young filly was in such a sad state, barely a year old and far too young to be shod.

“The ground was completely bare, she had no food, shelter or water and was eating mud to survive.

“Her movement was so restricted that she could only move a couple of feet either side of the lamppost.

“That’s no life for any animal and  completely unacceptable,” said Inspector  Lacey.

The gathering strength of the Covid-19 virus began to hit home even more during the second week of March with many events, not least all of the St Patrick’s Day parades in the county, falling foul of the pandemic.

Towns throughout the county would be parade-free on St Patrick’s Day as the county became accustomed to what life would be like for the duration of the coronavirus crisis, wrote Eamon Lacey.

The parades were cancelled in Clonmel, Carrick-on-Suir, Cahir, Cashel and Tipperary Town either before or as a result of Taoiseach Leo Varadkar’s announcement which said that up to 50% of the population could be infected.

Strict visitor restrictions at South Tipperary General Hospital and the issuing of guidelines to the public regarding attendance of funerals and Mass marked the beginning of how life would change utterly as a result of the  coronavirus threat.

Like no other edition of The Nationalist in its 125+ years in existence did one single story almost totally dominate from start to finish, simply because the corunavirus pandemic had mercilessly put a stop to almost every aspect of life in Tipperary, bar, of course, the essential services.

Business premises were being shuttered, school had been cancelled, pubs and hotels were closed, all sporting activities were shelved and even  Masses were no longer being celebrated in front of congregations but rather via video link to parishioners,  in the safety of their own homes.

That week we ran stories on such things as restrictions for visitors at the maternity unit in Clonmel; about the phenomenal response to Feed Tipp’s Heroes (health workers) during the pandemic; about Mass for a Confirmation class being said behind closed doors while the children remained at home; and about a Clonmel weightlifter, Luke Kelly, whose participation for Ireland in the European Championships in Moscow had been cancelled as Covid-19 spread worldwide.