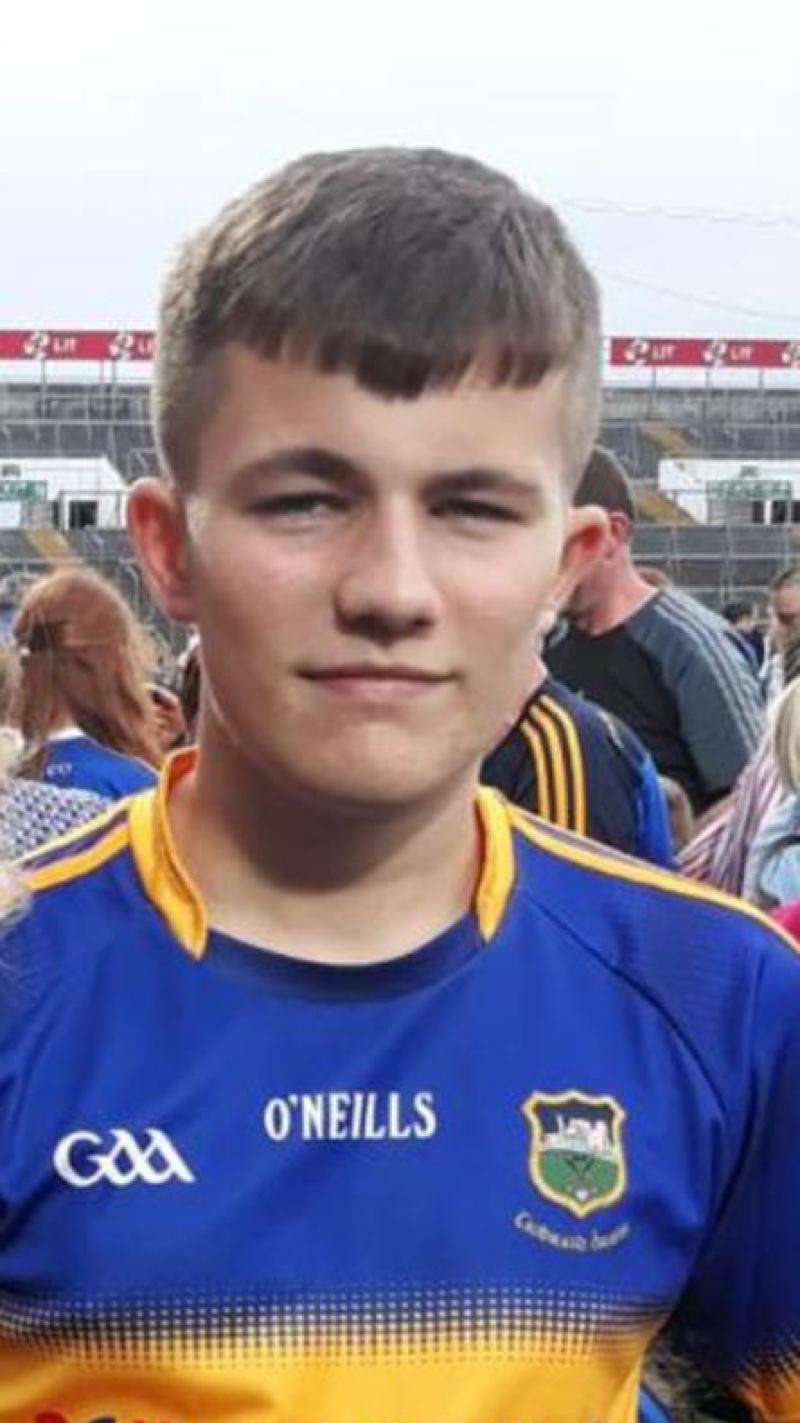 Hundreds of tributes have been paid to a young Nenagh man who died following a battle with illness.

Shaun Hilmi, 16, from Kilruane, who was involved in numerous sporting and community groups in his local community passed away peacefully last Saturday following a battle with a rare cancer, Ewing's Sarcoma, an aggressive cancer that affects just 2.93 individuals in a million.

His funeral Mass takes place this Monday, January 4, at 1pm in St Mary's of the Rosary, Nenagh.

A member of Nenagh Éire Óg GAA club, where his brother Craig is on the senior panel, and his cousin Tipperary senior hurler Jake Morris plays, the club posted on its Facebook page that it was "with great sadness that we heard the news this morning of the passing of Shaun Hilmi after a brave battle".

They said: "Shaun spent his juvenile years with us here in MacDonagh Park and the many people whose lives he touched are the richer for it. Our sincere condolences go to his parents, Geraldine and Lee, sister Laura and brother Craig, his extended family and his many friends in school and in other clubs, especially in Nenagh Olympic where he was a leading light. At dheis Dé go raibh a anam."

Nenagh Olympic Athletic Club posted that "our very brave young friend and colleague Shaun Hilmi lost his battle with cancer early this morning surrounded at home by his loving mom & dad Geraldine and Lee and sister Laura and big brother Craig. Our heart felt sympathies are with you guys now and always.
The bed of heaven to you Shaun your fighting spirit will live forever in our hearts.
Ar dheis Dé go raibh a anam.

Shaun was a past pupil of Nenagh CBS and they posted that the school community of St Joseph's CBS Nenagh were deeply saddened to hear of the passing of our student and friend, Shaun Hilmi, on Saturday 2nd January 2021.

"Shaun was a student in fifth year and an integral part of our school community. Shaun was a quiet and unassuming young man and a credit to his family. Throughout his time at the CBS, he always gave his full attention to any activity he was involved in - from his schoolwork, to his athletics and much more.

"Shaun was a dedicated and committed student and an accomplished athlete. Shaun was also a wonderful singer and contributed to numerous school events in recent years.

"Given the current Level 5 restrictions in place, we cannot participate in all the usual things we would normally undertake at a time like this. On our return to school, we will be better able to acknowledge Shaun's passing together and we will look at ways in which to celebrate his life.

"For now, we are asking all the members of our school community to light a candle tomorrow Monday 4th January at 1pm, as Shaun's funeral mass commences. This small communal act will join us together, while remaining apart, as we remember Shaun as he makes his final journey."

Nenagh Lawn Tennis Club also paid tribute to the tenn saying: "Today, we remember the late Shaun Hilmi, a much loved and very active junior member of our club.
He always showed great sportsmanship and was held in high esteem amongst his partners and opponents both on and off court. His presence in NLTC will be greatly missed during our junior events in the future."

Communities from all across Tipperary joined together to raise funds for life saving treatment for Shaun, who was diagnosed with cancer on May 27.

In January 2020, Shaun experienced discomfort in his right hip area, which at first was considered to be a minor injury or growing pains. After several intensive weeks of physiotherapy sessions, no progress was made and the pain continued to worsen.

Further tests and scans revealed a 10-centimetre tumour on his right glute muscle, which was lying on his nerve and causing him immense pain.

Prior to his diagnosis, the talented tennis player and GAA star played hurling and football with Nenagh Eire Og and was training five nights per week with the local athletics club.

Shaun passed away peacefully at home surrounded by his family. Pre-deceased by his beloved grandparents Daniel & Noreen Flannery. Will be sadly missed by his loving parents Lee and Geraldine, sister Laura and brother Craig, grandparents Jennifer and Ismet, aunts, uncles, cousins, extended family, relatives, neighbours and his many friends.

May Shaun Rest In Peace