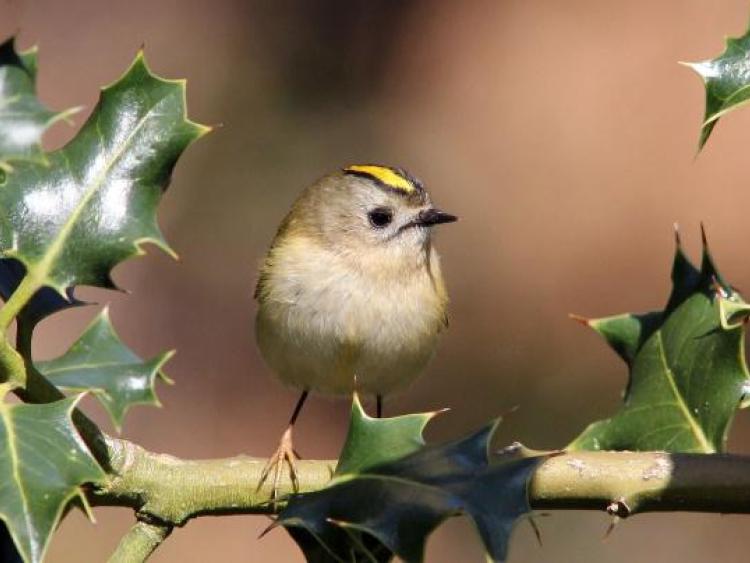 Snow covered the hills and clung to the shadier parts of the road, as we drove over to Keeper Forest Park. We had never been here before and I was looking forward to exploring somewhere new. The car park was packed and I just managed to squeeze the car in.

As you leave the car park the walk starts with a fairly gentle hill. The forest is densely planted with Sitka spruce and along the edges there is a little plant life.

Foxgloves were growing here and they can survive in the acidic soil and shady conditions. The forest was also very damp and moss had carpeted the base of the trees and the ground.

A few larch trees broke up the conifers. This is an unusual species as it a conifer, but loses it leaves during the autumn. The larch was decorated with a few cones and a myriad of lichens.

We came to a point where we had the option of turning right up a steep climb or continuing on. Neither of us was up for anything too strenuous this early in the year and we continued straight on.

A small stream has been diverted under the road and it is was the only sound we could hear in the forest. We passed some beech trees and their leaves were thick on the ground and it take a few seasons from them to decay.

Next we passed through a section of forest that was more open and moss had colonised the entire floor. I spotted something unusual near the top of a tree and we went to investigate.

At first I thought it was a squirrel drey, but the structure was far too big, unless he had moved his extended family in. Also a drey is usually built against one side of the trunk and this structure went around the entire tree and was doomed shape. My next hunch was a form of witches broom and later on my suspicions were confirmed.

We left the shelter of the woods and were exposed to a frosty wind. Farmland stretched away and each field was surrounded by a hedge. These followed the contours of the hills and given rise to all sorts of angles and shapes.

Where the fields touched the slopes the hedge was made of gorse. This hardy shrub is well able to survive the rigours of upland winter. Also it has sharp thorns that deter even the bravest of deer. Some of the land been left uncultivated and nature had reclaimed her place. Silvery mountain ash trees stood out and these had been carved into fantastic shapes by the wind. Aside from animals the wind has the biggest effect on upland trees.

Scattered here and there were hawthorn and holly and an important understory of ivy and bramble. While most field gates are now carbon copies of each other, the older style gates were crafted by local craftsmen. Many are sadly neglected and the one we found was barely hanging between two trees. I have taken dozens of photos of old gates over the years and they are part of the heritage of the countryside that has almost disappeared.

I was very surprised to find oak trees and a few of them were very large. Ivy as thick as your arm curled around the trunk and it is not often that this climber gets such a sturdy post high up on the hills. The oak was also supporting tiny oak apples. These are about the size of a marble and as hard. Inside there is the delicate larva of a wasp.

Birds were scarce but we did get an amazing view of a pair of Goldcrests. These are Irelands smallest birds and usually keep to deep cover.

Young alder trees were growing along the wet edge of the path. The adjacent fields were full of rushes and farming has always struggled here to keep nature at bay. We saw a farmer planting some birch and alder trees in a bare part of the ditch. He was not very talkative and when I mentioned how good they were for wildlife, he commented that the deer will probably eat them.

We reached a three way crossroads and we continued straight. Blackthorn edged the path and there was plenty of wild honeysuckle.

I knew were getting near a house when I saw lonerica growing on the banks. An old stone wall led us to a beautiful cottage. I was first drawn to the cottage garden that mixes flowers, herbs and vegetables and I style I love to work with. The owners have a sustainable approach and have built a timber house and put up a polytunnel. In the field there is a crop of willow and two content donkeys to keep the grass down.

A fast flowing stream accompanies us for the last part of our walk. Rose hips hung on arching branches and we also see a colourful male bullfinch. We stopped by an old house and the only inhabitants were a wrens and dunnock.
Japanese knotweed is well established along the part of the road and needs controlling to stop it spreading.

As we neared the car a raven glided above our heads ending a fabulous day of discovering nature.
Comments/Questions to albert.nolan@rocketmail.com or 089 4230502.

Albert is also available to give walks/talks to schools, tidy towns, youth and community groups.