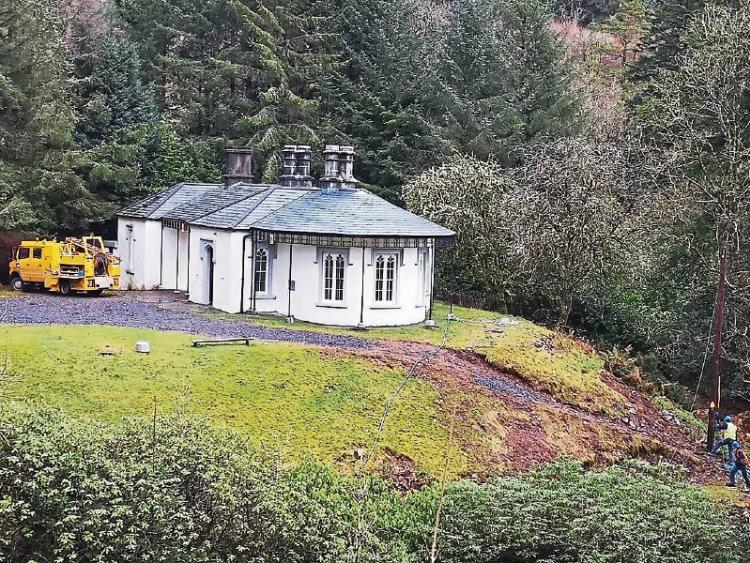 As most people are aware, work on Mountain Lodge in Glengarra Wood (near Kilcoran, Cahir) is an ongoing project.

In 2015,a decision was made by Burncourt Community Council to research the work involved in the restoration of Mountain Lodge to its former glory and as an amenity for the future. This resulted in Burncourt Community Council leasing the building with the objective of both the conservation and restoration of this iconic structure. A Conservation Report was commissioned to guide the Restoration process. Thought progress has been slow , to date the following has been achieved.

• Replacement of the Roof new chutes and soffitand Repair of the thirteen Neo- Gothic windows.

• A Survey of the existing waste water system has been carried out and replaced with a bio-cycle system which had to be realigned with the existing sewage system.

• The building has been rewired and a heating system installed.

• Treatment of wet rot system in some rooms has been dealt with.

• Some external groundwork has been completed.

• The ESB worked on the connections pre Christmas and with the supplier on board, the building will be equipped with an electrical supply. This is a huge step forward.

Work for the future will involve:

• Re-design and replacement of toilet and shower block

• Groundworks and fencing to the surrounds

All of the above will entail a lot of work and a significant cost.

Though substantial grant aid has been received to date , shortfalls not covered by Grant aid have to be raised by the Mountain Lodge Committee and by the securing of loans with subsequent interest repayments to continue financing the project.