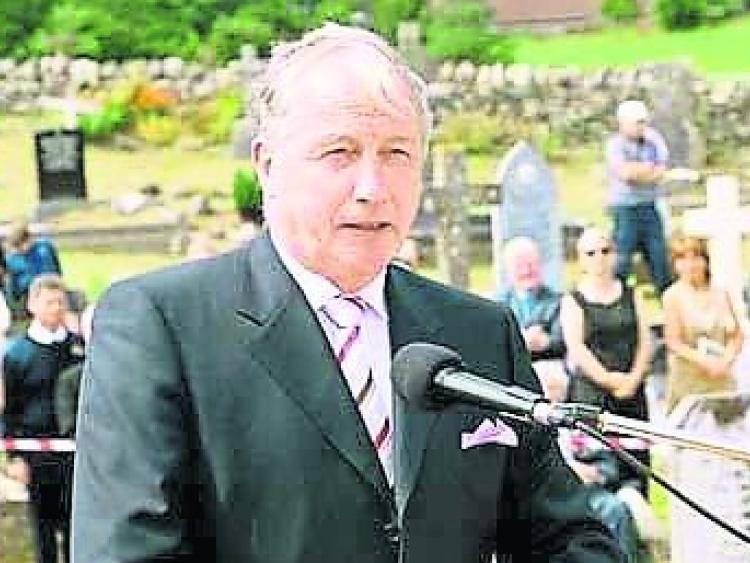 As Mick Smith approaches a milestone in his life next November, his eightieth birthday, he can look back on a political career of service that one could be proud of.

He now resides in contented retirement near a well known landmark in the parish of Bournea, Bergin’s Forge, with his wife Mary, and his pillar during those challenging years in the political battlefield.

A successful Intermediate Certificate or Leaving Certificate opened opportunities to the youth that had huge benefits and gradually parents began to realise the value of second level educaation.

At Templemore CBS Mick was very much at home embracing the educational challenge with gusto and also distinguishing himself at hurling and football. His prowess at Irish saw him winning a special award in the Intermediate Certificate Examination in his native tongue.

Even at this stage of his life his leadership qualities were blossoming and he had the distinction of captaining Templemore CBS to its first Munster Title in hurling, The Kinnane Cup in 1958.

Also that year the school captured the Corn na gColáistí title for under 18 football with Smith being a pivotal figure in the success. In 1958 he was selected on the Tipperary Minor football team.

In late 1958 a job opportunity with the South Eastern Cattle Breeding Society presented itself and being one of the older members of a big family he took on that opportunity and postponed any further academic pursuits for the time being.

In the following years he involved himself in GAA affairs at club and divisional levels. At this time in the parish of Clonakenny quite a number of promising young hurlers were emerging. For many years in the parish the leading administrative GAA figure was Jim Cody who carried the flag almost singlehandedly and the emergence of Smith as a young enthusiastic able ally was a blessing.

He brought organisation to the GAA Club and provided the wherewithall that enabled the emerging youth to maximise their potential.

For the first time in the club’s GAA history divisional titles at No. 2 junior hurling were secured, this followed with a number 1 junior title coming to the club in 1964. While Smith was a pivotal figure in the playing field in securing these victories the organisation and direction he was giving the club was equally important.

The winning of the County Junior Football title in 1966 and the County Intermediate Hurling title in 1967 was the reward for the great work performed by Smith, Jim Cody and other volunteers during that period in the club’s history. Those victories also put Clonakenny, the smallest parish in the diocese of Killaloe on the GAA map.

Despite Smith’s huge contribution on the GAA scene he had many other irons in the fire. He was pursuing a third level qualification in UCC and also furthering his education in the intricacies of GAA life at Mid Board meetings in the Glenmorgan House in Thurles. He often told me how he learned strategies at those meetings in smoke filled rooms at the time that proved invaluable at cabinet meetings in later years.

Being the son of Bill Smith who was one of the founding fathers of Fianna Fáil in the twenties, it was not surprising that Mick should show an interest in politics but just the same it came as a surprise when he was selected to contest the North Tipp. Co. Council election for the Roscrea - Templemore area in 1967. He had a huge electoral success and thus began a career in politics that lasted until 2007.

In the following two years his political profile was rising and as the General Election of 1969 approached it was no surprise that he was selected to contest the three seater North Tipp. Constituency on the Fianna Fáil ticket that included Michael O Kennedy and former star hurler the legendary John Doyle from Holy Cross.

It was a mighty contest and in the end he edged out Doyle for the third seat and joined his party colleague Michael O Kennedy and Fianna Gael’s Tom Dunne as North Tipp. representatives in Leinster House.

It was during this election that the famous Smith electoral machine was born and they did an excellent job. It comprised of his wife Mary, brothers, sisters, father and mother, cousins and many friends and at this stage in his career were a wonderful support.

Despite creating a favourable impression as a rookie deputy in Dáil Éireann, the weather vane constituency of North Tipperary was unpredictable and with a swing away from Fianna Fáil, Smith lost his seat in the 1973 election. Further disappointment followed when he narrowly failed in his attempt to secure a seat ine the Upper House.

At this point in his career his metal was tested. He rolled up his sleeves and worked night and day in building up his dairy herd on his recently acquired farm.

Having been bitten by the political bug he worked hard in this field also improving the organisational structure in the constituency and when the general election of 1977 was called Smith was ready and retained his seat.

At this stage his political star was on the rise and in 1980 he was apppointed Minister for State in the Department of Agriculture. At this stage Smith was on the Ministerial ladder but it did not last long and with three elections in a short period of time (1981-82) Smith lost his Dáil seat in November 1982 to returning European Commissioner Michael O'Kennedy.

His resolve was further tested by this setback, but he bounced back and was elected to Seanad Éireann for a four year stint (1983-1987).

The General Election of 1987 saw Smith returned to Dáil Éireann and with his trials and tribulations in the distant past he held his seat until 2007 when his neighbour Noel Coonan ousted him.

Following his success in the general election in 1987, ministerial appointments came thick and fast. In March 1987 he was appointed Minister for State in the Department of Tourism and Fisheries and Forestry.

Later in 1987 he was promoted to the Energy portfolio. In 1989 he was appointed Minister for State in the Department of Industry and Commerce, a posting that lasted until 1992.

Following the electoral success of Albert Reynolds in the 1992 General Election, Smith was appointed Minister for the Environment. During this period in government he also had the Education Portfolio.

The election success of Fianna Fáil in 1997 saw Smith appointed Minister for State in the challenging Science and Technology field, an area that was becoming hugely important at this time.

Following a short few months there he was again back at the Cabinet Table as Minister for Defense, a position he distinguished himself in until 2004.

That brought the curtain down on a wonderful political career that stretched over forty years. There is no doubt but in the words of the late Charlie Haughey, he did the state some service.

He was a most honourable servant of the people of Tipperary North and his integrity and sense of loyalty to county and country ensured that he never got embroiled in any controversy.

The people of the beautiful parish of Bournea should be immensely proud of his contribution and hopefully in the not too distant future his son Michael will get a chance to challenge for a seat in Leinster House.