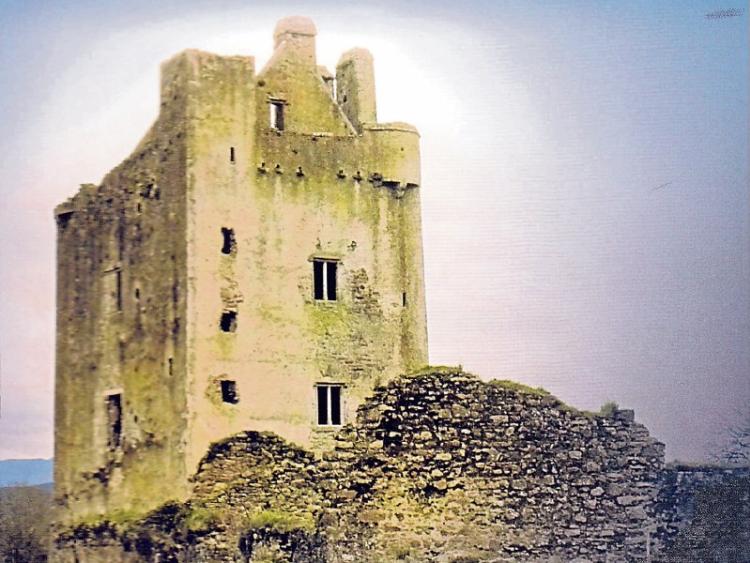 Kilcash Castle which appears on the front cover of John Flood's new book "Kilcash and the Butlers of Ormond."

Recently, some very important “captains” of Irish industry (three in all) were travelling, on a business trip, in south Tipperary. On seeing the signpost to Kilcash they took a break in their journey to visit the historic ruins. At the present time, the Office of Public Works is engaged in carrying out some conservation work on the buildings and so they could not gain admittance. The three stood at the locked gates and gave a loud, spirited rendition of Cill Chaise - Créad a dhéanfaimid feasta gan adhmad, tá deireadh na gcoillte ar lár….

It seemed to me that thousands of us, generations and generations of people in this part of Ireland, could have cheerfully joined them in a song that was a standard in our school choirs. We may have grown rusty on the cupla focail and have long forgotten the dreaded Irregular Verbs, but the poem and the song about the ancient castle, and the “deighbean” (the good woman). “She gained esteem and affection above all women…” who lived there, is embedded permanently in our brain cells.

But Kilcash is about much more than a lament for the good woman and the levelling of the woods. It is part of a much larger canvas in the history of this beautiful and fertile area of Ireland in which so many of us live. It is in the old territory of Ormond, which has sometimes been described as a “kingdom within a kingdom” under the lordship of the great and enduring Butlers.

John Flood, in his recently published book: “Kilcash and the Butlers of Ormond” has now greatly contributed to our knowledge of the story of a place that we sentimentally sing about, but has also expanded our knowledge of what he has described as “Conflict and Kinship from The Middle Ages to the Great Famine,” especially in this part of Ireland.

In centering his book on Kilcash Castle, he is writing about his own place. He is a native of the area but is now attached to the University of Groningen in The Netherlands, where he lectures in English and he is already an established writer. This is a scholarly study, but it is obviously written with a deep love of place, and in language easily accessible to the ordinary reader.

The first Butler in Ireland does not bear the name “Butler” at all. He was Theobald Walter who accompanied Prince John to Ireland, and because of his service to the Prince was awarded with the hereditary title of Chief Butler of Ireland. Thus began a family which over the centuries became multi-layered, and probably because of their political savvy, their wise choices in marriages, their ability for adjustment and compromise, they survived as a great source of wealth and power, into relatively modern times. At a time when a religious commitment became a choice of retention or loss between life, death and/or power, the main branch of the family conformed, while some of the layers quietly held on to the old faith. It could be cynically said that the Butlers were always on the winning side.

While taking readers through the complicated genealogy of the Butlers, John Flood concentrates on the Kilcash branch when the original de Valles (White) property came, in a complicated procedure, into their occupancy. And so we eventually come to the Thomas Butler and his wife Lady Iveagh (1698-1744) of the Cill Chaise - the heroine of the song. She was it would seem, a good and charitable and much loved woman, who did facilitate the celebration of Mass in very troubled times.

As readers, we travel in this book through the prosperity, the decline, the much lamented felling of the trees, the Mass meeting on Slievenamon in 1848, the shelling of the castle in the Civil War and finally to 1997, when Kilcash is gifted to the Irish state and becomes a National Monument.

In a chapter under the title: “Song and Lament” the author writes “Lady Iveagh was not the only impetus for composition tied to Kilcash” and he introduces “other pieces associated with places or people of Kilcash and Temple-etney before 1850” such as a poem written by the celebrated Irish poet, Aogán Ó Ratháille to mark the marriage of her daughter, Honora, in 1720. He explores other writings in praise of the Butlers. The reader can speculate as to whether these were genuine expressions of admiration or, whether keeping on the right side of this powerful family, was the equivalent of the political correctness of our own times. But of the song which first introduced us, as children, to Kilcash, there seems no doubt that it was, indeed, a lament for a much loved woman.

The legacy of the Butlers can still be found in the architectural gems which they left to Ormond towns: the magnificent castle complex in Kilkenny, the unique Tudor Manor in Carrick-on-Suir, The Main Guard in Clonmel, Cahir Castle, Nenagh Castle and several smaller buildings throughout Kilkenny and Tipperary.

“Kilcash and the Butlers of Ormond” is a compulsory, but very enjoyable read, for any citizen interested in the political, social, architectural, historical area in which we live. It is a treasure.