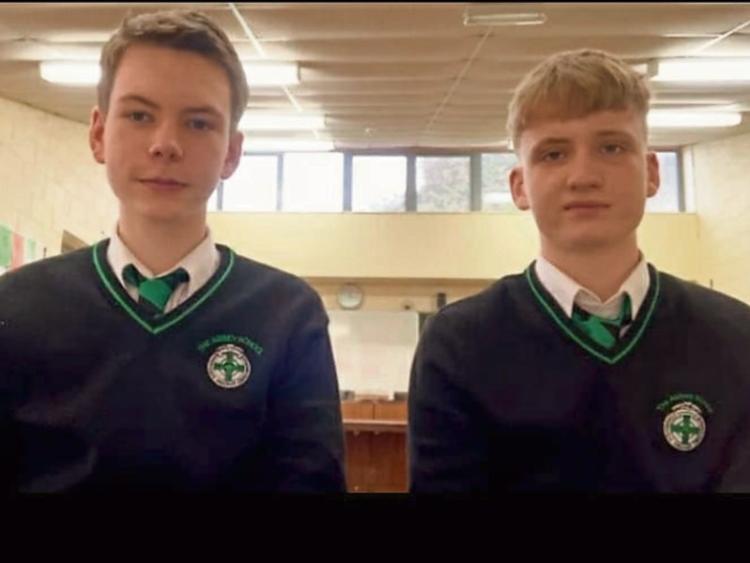 Abbey CBS   students Shane O’Connor and Liam Carew were one of the many hundreds of groups that entered the 2021 BT Young Scientist.

Their project entitled “Assessing the Impact of Second Level Education on Key Aspects of Adolescents’ Life and Development” was chosen to get through to the finals of the competition.

As the boys came to the end of their Junior Cycle journey last May, they began to reflect on their time spent in Secondary School. In assessing their education experience to date, both boys felt they had both developed well and grown exponentially. They were aware however, that some of their fellow students had differing experiences to them.

From this curiosity emerged the question: “How does Second Level Education impact on students?”

On acceptance into the competition in October, the boys set about formulating a plan. The initial stage was to develop a survey. This survey would be distributed to students in secondary schools of varying social and gender mix.

With the help of their supervising teacher, Ms. Eavan Ryan and school principal Mr. John Kiely, their survey was distributed amongst students. Over 600 responses were received.

A series of interviews where then undertaken to develop their qualitative data. Mr John Kiely, principal and Limerick Senior Hurling manager was interviewed to gain his view on student experiences along with guidance counsellor Mr. Conor Hayes. Irish Second Level Students Union Education Officer Alicia O’Sullivan in her interview shared her experience with the ISSU and as a student activist.

Others who were interviewed and provided invaluable information were Deputy Chief Inspector at the Department of Education and Skills Padraig MacFhlannchadha, Senator Joan Freeman and Professor Selina McCoy, Associate Research Professor with the ERSI and Adjunct Professor of Sociology in Trinity College Dublin.

Eventually Shane and Liam produced a project book of over 105 pages containing all of their findings. Shane and Liam were delighted and honoured their project claimed first place in the  Social and Behavorial Sciences Intermediate Group category at this year's BT Young Scientist Competition.

Shane and Liam’s win continues a successful traditio  that The Abbey School have with the BT Young Scientist Competition.

In 2017, Tadhg Carew and Jack Quirke represented the school in the BT Young Scientist. Their project won third place in their category.

For Shane and Liam, the experience of competing in the 2021 BT Young Scientist has been the highlight of the Transition Year programme. They look forward to developing their project in the future and have much planned to do so.