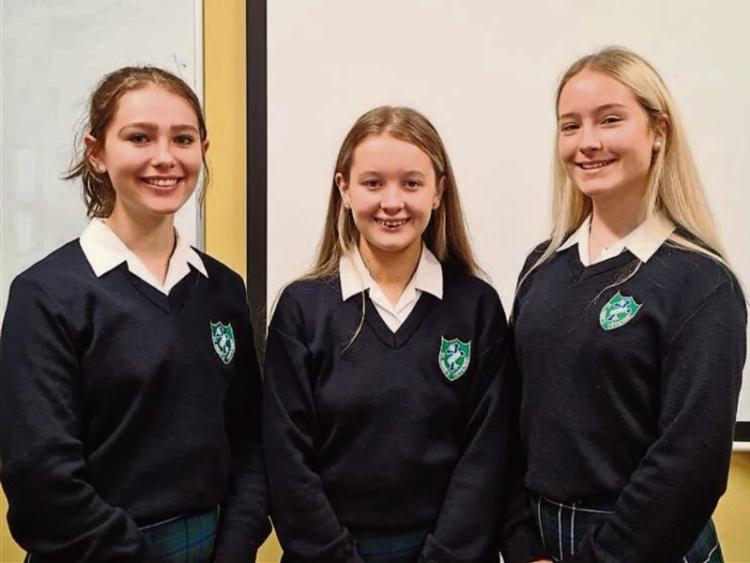 Ava O’Sullivan, Ellie Cremins and Áine Carew, whose project ‘An investigation into the effectiveness of copper door handles in hospitals, schools and care homes as an infection control measure.'

The Young Scientist Competition is a hugely important and influential feature of Irish science education since 1965.  Traditionally, schools prepare science projects and enter them into the preliminary rounds of the competition.  Successful projects then, traditionally, displayed their projects to the public and adjudicators at the RDS, Dublin.

This year’s BT Young Scientist competition followed a similar selection procedure, but then unfortunately was unable to bring successful applicants together in the RDS due to Covid 19 restrictions.  However, all was not lost, and the final stages of the competition were held online, on a virtual platform.

Despite the difficulties presented this year, St. Anne’s Secondary School, Tipperary Town, has had its most successful year to date in the Young Scientist Competition.  Firstly, 8 different groups of Transition Year students prepared projects with their teachers.  Incredibly, all 8 groups met the criteria required by the adjudicators and were accepted into the final stages of the competition.  Students and teachers all worked extremely hard, preparing their projects and completing them in time for the Christmas deadline.

After Christmas, students then displayed their projects at the virtual BT Young Scientist competition for 2021. They were available for viewing by the general public. Again, two of the the eight groups from St. Anne’s were very successful, both being ‘highly commended’ by the adjudicators in their specific categories.

The first successful project was entitled ‘An Investigation into the effectiveness of copper door handles in hospitals, schools and care homes as an infection control measure.’  This project was completed by Ellie Cremins,  Áine Carew and Ava O’Sullivan.  Their teacher was Mr Patrick Kivlehan.

Ellie said ‘we chose this topic due to the recent concern associated with the spread of COVID 19. All three of us have at least one grandparent with an underlying health condition so we each had a keen interest in the project.’ Áine explained ‘we inoculated copper discs with non-pathogenic bacteria such as straphylococcus aureus and calculated the rate of kill at different time periods. We found that the bacteria were killed within 2 hours on copper but not on the control. We also used stainless steel and aluminium discs. We can extrapolate our results to pathogenic microorganisms such as MRSA’.

Ava went on to explain ‘we therefore recommend the use of copper door handles and copper surfaces as a means of infection control’.  This is indeed a very relevant finding to us all in the midst of a world pandemic and beyond. It is not surprising that this project was highly commended in the intermediate Chemical, Physical and Mathematical Category this year. 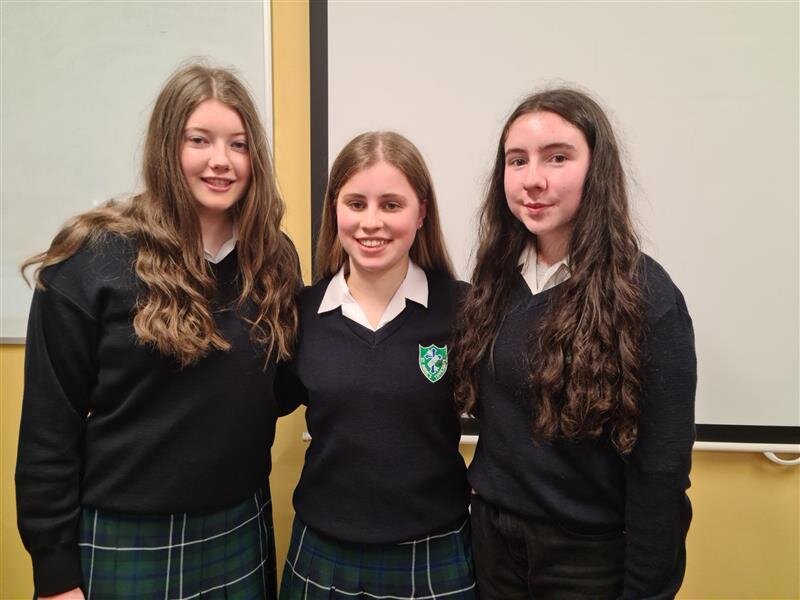 Keelin O’Connor, Sinéad Hayes and Emily Bourke, whose project ‘Exploring the effectiveness of drinks in cellular hydration’ was highly commended by the adjudicators at this year’s BT Young Scientist Exhibition.

The second successful project from St. Anne’s was entitled ‘Exploring the effectiveness of drinks in cellular hydration’. This project was completed by Emily Bourke, Niamh Hayes and Keelin O’Connor.  Their teacher was Ms Lorraine O’Dwyer.

The students explained ‘the aim of our project is to investigate which drinks are best for hydrating body cells. We tested a variety of drinks including minerals, water and energy drinks using the visking tubing experiment. The conclusion from our test results is that water is the most effective drink in providing cellular hydration.’

Again, the students provided very interesting data that proved the effectiveness of water as an excellent source of hydration, and debunked the marketing notions that some other minerals may provide better hydration than water. This project was highly commended in the Ecological and Biological Intermediate Category.

School principal, Ms Colette Treacy, said she was very proud of all the St. Anne’s students and teachers, who so enthusiastically and diligently researched scientific topics of interest to them and then presented their findings in an engaging and interesting manner.  She commended all involved for their determination and hard work, and said she was especially delighted for the students and teachers whose work was highly commended by the adjudicators.  It is the first time that St. Anne’s has had eight groups in the Finals of the BT Young Scientist Competition, and that is indeed a wonderful achievement.