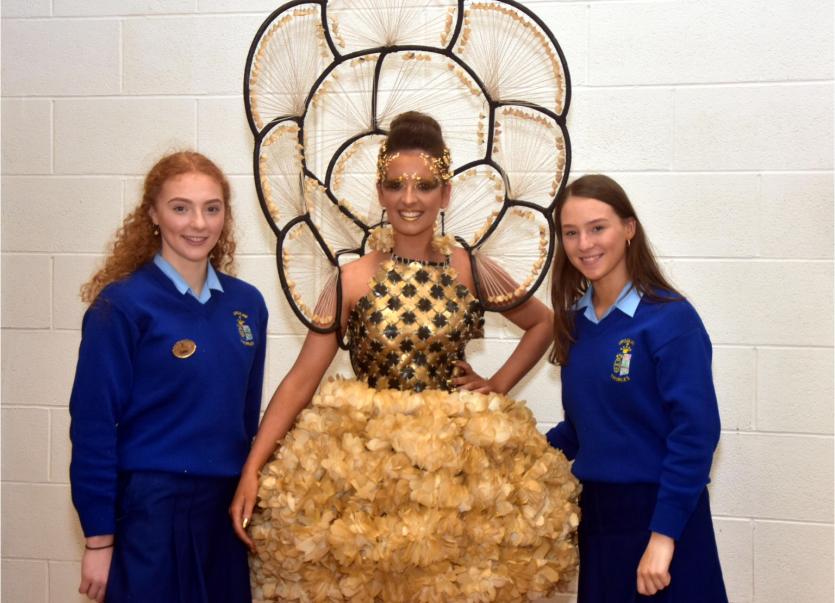 It was a spectacular night for the Ursuline Thurles on Thursday, 4 February when Junk Kouture Grand Finalist ‘Givin’ it Welly’ was crowned the Southern Region winner, live on RTE 2.

This original creation, made from old wellington boots, airline pipe, chicken wire and milk filter socks beat off stiff competition from 19 other hopefuls from the South including the Ursuline’s other two finalists.

Designers Laura Hally, Cathy Hogan and Emma Ryan showcased their haute couture gem in Bruff, Co. Limerick in November and clearly wowed the judges with their innovation and the imaginative use of farming materials. The students wished to highlight the under representation of women in agriculture, an issue close to their hearts.

It was also a brilliant night for the Ursuline’s other Grand Finalists, ‘Barking up the Wrong Tree’ and ‘Midnight Memories’, both of whom were singled out for special praise by the judges.

‘Barking Up the Wrong Tree’ won the most Unusual Materials prize. Judge, Steven McLaughlin, loved the style of this dress, modelled by Kate Fitzgibbon, likening it to the earlier work of Alexander McQueen.

He was impressed by the fantastic craftsmanship, saying there was something magical about the design.

Thanks to Mr English and all the teachers involved in Junk Kouture who, along with the students, created cutting edge, award winning outfits resulting in the Ursuline’s most successful year yet in this prestigious National competition.