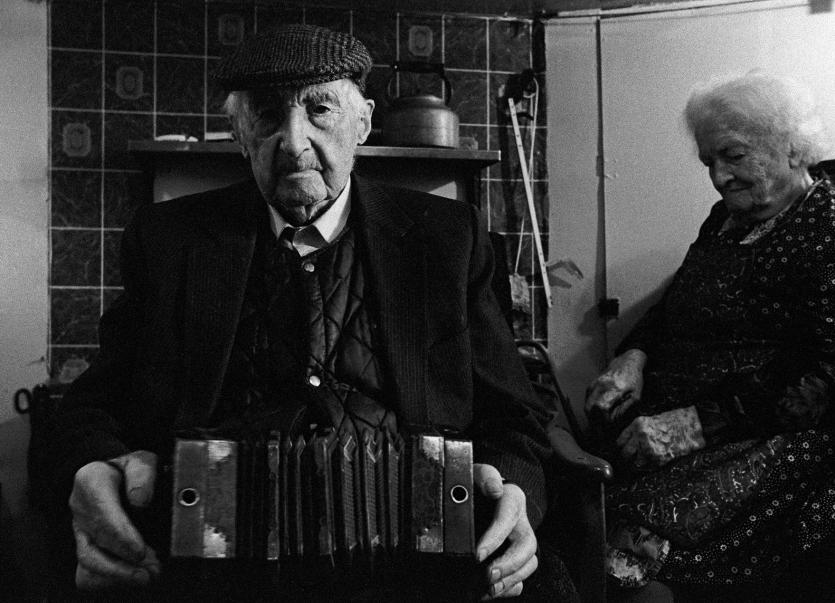 John Ryan with his wife Mary

An exhibition of photographs by renowned photographer Seamus Murphy is on display on the Source Arts Centre online Gallery.

The show ‘Citizens’ includes a series of portraits of War of Independence veterans which Murphy took in 1998 when he travelled the country taking shots of the men and women involved. Almost all were in their later years and all are now deceased.

One of Murphy’s trips including journeying to Hollyford to meet John Ryan who was then 106 years of age. Ryan was part of the Tipperary Brigade during the War of Independence period.

Murphy said that he had expected an older somewhat infirm man, however Ryan was sprightly even at that age.

Murphy says: “This guy answered the door and looked at me. I said I’m here to see John Ryan and he said, ‘yes, that’s me’! He played an accordion in the kitchen whilst his wife Mary watched and a dog ran about the place.”

Brendan Maher at the Source Arts Centre says: “We did a facebook post using the image Seamus took of John or ‘Jack’ as I understand he was known and we had the biggest response ever to that post. Relatives of John’s extended family, cousins from far and wide, shared memories of him and commented on the shot. Some were from as far away as America, with many planning to link up following the pandemic. It’s great when a photograph can make such a direct connection to a community.”

The images in the show look at how citizens come to terms with life in post-conflict situations – specifically Irish War of Independence veterans and includes a new suite of photographs Murphy took of the Syrian Community in Thurles last September.

The families in these new shots came here, from the ongoing Civil War in that country, over six years ago.

The exhibition can be viewed on the Source Arts Centre website: https://www.thesourceartscentre.ie/events/info/citizens-seamus-murphy