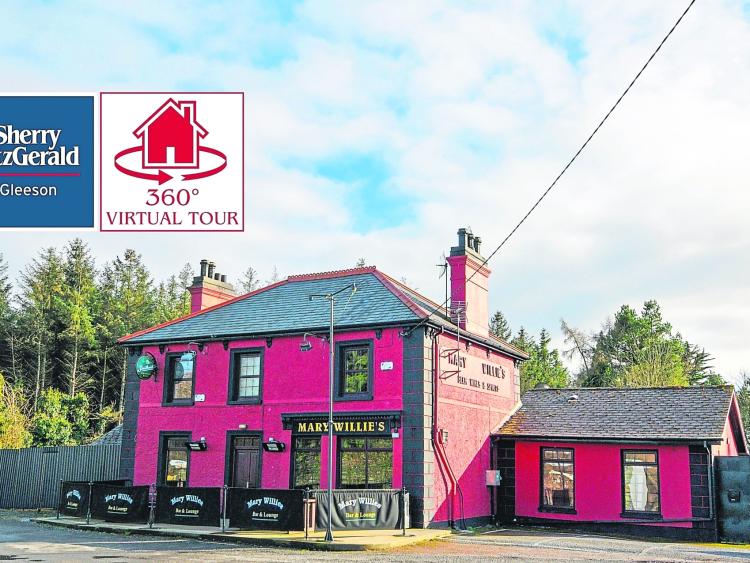 Situated in the heart of Ireland, Mary Willie’s is a famous and well-known hostelry, more particularly by hurling fans travelling to and from Semple Stadium in Thurles or Croke Park, from all corners of the country.

The location, halfway between Dublin & Cork, lies just one hundred yards off the old Dublin / Cork Road and within view of the replacement route, the M8 Motorway.

There is great potential for further development as a boutique hotel for tourists, cyclists or culinary students, as there’s a lovely compact function room where small weddings and birthday parties were held pre Covid.

Although the former Main Road is now bypassed by the M8, there’s still considerable traffic and with the renewed interest in rural Ireland and all it has to offer by way of reduced property prices, country living, schools and overall lifestyle, Mary Willie’s has a bright future.

Legend has it that Mary Stapleton and Willie Wiley eloped from their native parish and settled in this place, a busy crossroads, to later open a roadhouse for weary and thirsty travellers.

Happily, the name survives and is now part of local folklore, still serving up hospitality in all forms to locals and visitors alike.
There’s also a strong historical connection, in that De Valera and Michael Collins met there, three weeks before the latter was killed at Béal na Bláth.

It seems that word got out about the meeting and there was an ambush by the Anti Treaty forces, so violent that there are bullet holes in the walls to this day. This event is covered in Eoin Neeson’s, ‘The Irish Civil War’.

Another great but true story is that Con Houlihan, the renowned Irish Press Reporter, regularly compiled his account of hurling matches taking place at nearby Semple Stadium, from the barstool at Mary Willie’s, without ever setting foot in Thurles!

As well as a popular GAA watering hole, the Pub was also well regarded for its Irish Music sessions, hosting Liam O’Murchu amongst many others.

Music festivals were also held in the Summer, coinciding with The Trip to Tipp, Feile, etc, whereby Mary Willie’s held its own ‘Craic at the Back’, in their own large enclosed beer garden.

Lastly, for fear that buyers might be worried about having access to internet in the heart of Tipperary, Fibre Broadband is currently connected to the premises (Speed Test on 20.1.21 – 472mb download speed).