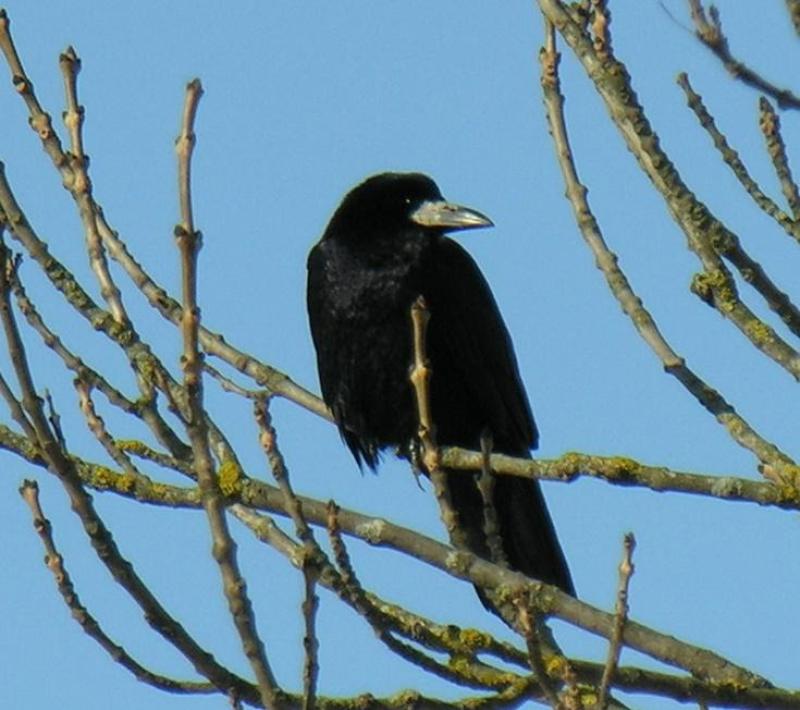 Last week I was watching the birds in the garden when I spotted a lone rook perched on the electricity wire. Rooks are normally very social birds but I did not give it too much thought, as he was probably sizing up the nut feeder. The following few days he was in the same position and my curiosity was aroused.

The next morning my heart skipped a beat as my rook was there, but there was another one in the tall ash tree. This tree was saved when we were developing the garden and the digger replanted the tree, at the back of the garden.

It is now taller than the house and while I don’t like to ascribe motivations to birds, I think this was a pair investigating a potential nesting location.

As I watched the rook, whom I think was the female, hopped along the branches and every so often rubbed her beak off a branch. Ash trees are great for rooks to build their bulky nests as the branches are forked and this gives great support to their large nests.

The branches also sway with the wind and this is like an earthquake proof building. The one disadvantage is that ash leaves are very late to emerge and this leaves the chicks open to the elements and predators.

After a few minutes she flew away followed by the calling male. I have been trying to encourage rooks to nest here for years but they are extremely faithful to the same location. I can see and hear the local rookery from my front door. In winter they settle noisily as dusk approaches and in the summer I can hear their calls well into the night. This rookery is located in a tall grove of beech with a few sycamore trees. It is marked as a spinny on the old ordnance survey map and is well over a 100 years old. This is one of the few locations where there are tall trees in my hilly and upland community.

The rookery has been increasing in size each year and the number of nests has nearly doubled. The more senior and dominant pair’s use the best spots, while other birds are pushed on to the fringes and less favourable locations. Many of the smaller satellite rookeries have been absorbed over the years and this has led to a tight battle for spaces. Trees have also come down in storms and these are increasing in frequency.

One old farmer had a small rookery for years around his house, but high winds damaged the trees and brought down ancient nests. The rooks left and have not returned and he misses their company, as they had been one of the first sounds he remembers from his childhood.

With good nesting spots running out the pair the pair I spotted in the garden might be the first potential nesters. I have seen rookeries start off with a single pair and grow over the years into a substantial number of nests. A friend of mine had nesting rooks in his garden for several years.

In the spring time as we emptied the moth trap the rooks would keep up a continuous calling. They slowly started to dwindle in numbers till one spring they were gone completely. The culprit was a mystery till a well fed grey squirrel was spotted leaving one of the rook’s nests with eggs. When predation level reached an unsustainable level the intelligent rooks cut their losses and moved on.

Rooks are large stocky birds and from a distance look completely black. Up closer and if the sunlight is right their plumage has a glossy purplish sheen. They have a powerful beak that they use to probe in the grass for leatherjackets and other soil invertebrates. Rooks also eat a wide variety of plant and animal material from eggs, insects, corn and grain.

The females are larger than the males but this can be hard to tell even when you see a pair together. They will generally mate for life and throughout the year, there is plenty of mutual preening as they work hard to keep their bond strong. Just like in the human world other single rooks will display to test the strength of a pair's relationship.

Some rooks are more industrious than others and their nests will be nearly finished before others have started. There are many traditions around rooks and one my grandmother uses to say was that if they drop a stick they won’t go down and pick it up.

This might be true but I can think of one or two good reasons for this behaviour. The stick might not be the right fit for the nest or rooks don’t like to go down to the enclosed places beneath the trees, as they need room to take off. My favourite is that they are constantly bickering with their neighbour and when they open their beaks their stick falls to the ground.

They only have one family of up to four chicks and when these leave the nest they perch on branches around the rookery. Thrifty and hungry country people would pluck them from the branches to make a pie.