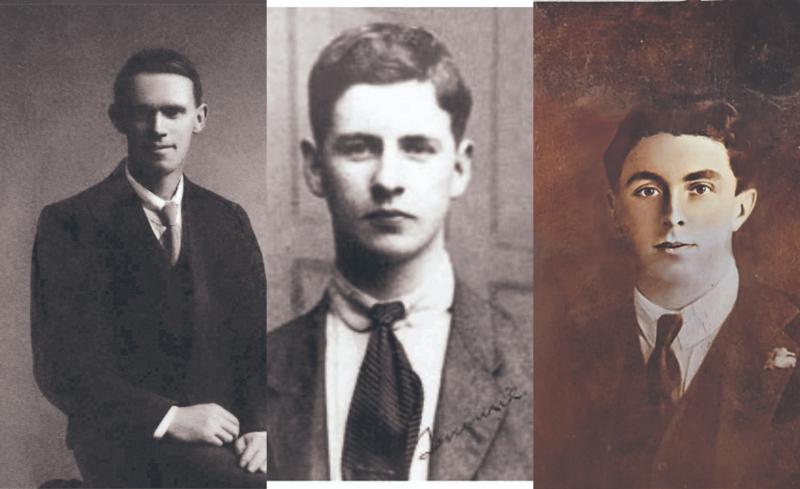 Tipperary organisation Comóradh na nÓglach in association with Trasna na Tíre is holding an online commemoration at 7:30pm on Saturday March 6, 2021 to mark 4 Tipperary events, occurring between March 4 and 10, 1921, in which seven Republicans lost their lives across mid and south Tipperary.

Comóradh na nÓglach is no stranger to hosting online Commemorations having held a very successful commemoration of the Burning of the Barracks last May and co-hosted Seán Treacy’s Centenary Commemoration last October.

“We feel it is important to mark these events to remind us of the sacrifices made by the people of our county in the fight to establish the Republic proclaimed in 1916”, said Seán Nugent, treasurer of Comóradh na nÓglach. “Unfortunately as the lockdown period grows ever longer, more and more of these events have been postponed and we feel it is right that this terrible week in Tipperary be marked by a gathering, albeit a virtual one”, he continued.

“Examined together the widespread community trauma from these events was clearly huge”, said Kathleen Allis-Cleary chairperson of Comóradh na nÓglach. “Despite the lockdown we believe that the week must be marked as a community and that is why we are holding our online commemoration on the hundredth anniversary of the bloodiest day of the bloodiest week in Tipperary in 1921.”

“Sometimes events like this are dealt with by historians with a deal of detachment. The aim of the commemoration is to honour these men, their ultimate sacrifice and the awful grief of their families and community”, said Kathleen, “In addition we will examine their context at local, county and national levels.”

The event will comprise many traditional elements associated with a physical commemoration, including an oration and songs. In addition, there will be an insightful panel discussion made up of local historians some of whom are relations of the men we are honouring. The impact on the families will also be looked at and the aftermath on the local communities.

But the organisers are also planning another very special tribute. “For every name on the Rolls of Honour of the three Tipperary Brigades are dozens more who were rarely if ever acknowledged afterwards for the roles they played in the War for Independence 100 years ago”, said Seán, “During the commemoration we will play tribute to all the men and women of Tipperary who fought for our freedom.

“To that end we are asking for members of the public to share with us their volunteer and Cumann na mBan photos from the 1916-1923 period. If they are of the Tan War/Civil War period or of them in later life that is fine too. If you have no photo of your volunteer or Cumann na mBan relative please send in a family photo , we know that a life laid down for Ireland or spent in service for Ireland involved the sacrifice and grief of so many in that troubled period. A Tipperary connection is preferable but not a pre-requisite.”

A Week of Blood for Tipperary

So what exactly occurred in the week from March 4 to 10, 1921 to make it stand out in an already brutal period?
Tommy Lee was an active and committed volunteer and had been on the run for several months by 1921. He and his friend Captain Patrick Ryan were eating breakfast in Coffey’s Farm near Fethard when they spotted a large party of RIC preparing to surrounded the house.

The young men escaped out of the house through a back window and made their way across the fields in different directions. Tommy Lee was shot in the back and fell gravely wounded. The RIC put him in a cart and brought him back to Fethard.

Witnesses who saw him being moved said that he was clearly in great pain he was again moved from there to Tipperary Military hospital where he died in the early hours of the following morning. His father noted sadly in his court of Inquiry file that he had last seen his son alive 3 months ago, probably a brief Christmas visit home to see his family.

A few hours after Tommy Lee was gunned down, Commandant Patrick Hogan and Jim Nagle walked into Cantwell’s Public house in Cashel and shot RIC Constable James “Sunny Jim” Beasant as he stood chatting at the bar. The act was a bold move on Hogan’s part considering a patrol of eight armed police stood close by outside Corcoran’s Hotel a short way up the street.

The IRA men left Cashel immediately and met up with others of the ASU the next day and seven men went to Derryclooney near Cahir where they decided to billet for the night.

They split up into different houses down the remote road with Paddy Keane and Paddy Hogan in the first house and the others further down the road. At 7 the next morning their peace was shattered when a loud knock was heard, the two young men awoke and realised that the house was surrounded by members of the 31st Brigade Royal Field Artillery led by Captain C.F.K. Marshall.

A firefight ensued lasting about 10 or 15 minutes with Hogan and Keane carefully husbanding their meagre ammunition by occasional shots outward while the military kept up a constant barrage of fire covering the unfortunate Daggs in glass and debris as they lay on the kitchen floor.

Hogan received two bullets to the head and Keane, out of ammunition, negotiated the surrender with Marshall. Hogan, unconscious and clearly dying, was loaded onto a cart and it was driven towards Cahir with Keane walking behind watching as his friend died.

Later the same day, at about 4pm in a disused stable in Knockroe, just outside of Drangan 12 officers of the 7th Battallion were at a Battalion council meeting. As the meeting was drawing to a close, soldiers were seen approaching. Most of the party dashed out of the stable and while many got to cover and made their escape, Martin Clancy was fell by a ditch Lewis Gun bullets breaking both his legs, they continued firing and he was killed by a shot to the chest.

Patrick Hackett was received two gunshot wounds to the body and a final one to the head. Richard Fleming was still in the stable and when soldiers approached he came to the door and was gunned and like Patrick Hackett he received a coup de grâce.

The Thurles murders followed just 3 days in reprisal for the execution of two spies on March 7 in Ballytarsna. On the night of March 9 just before midnight, three masked men entered the house of 23 year old volunteer William Loughnane on Mitchel St., broke into his bedroom which he shared with his brother James and, holding James back from protecting his brother, they shot William and left. They then proceeded to the house of Michael Leahy on the Square but did not find him at home.

Another group broke into the house of Laurence Hickey, a 41 year old Sinn Fein. As his pregnant wife Catherine looked on, they threw Laurence down the stairs amid a hail of bullets. Laurence tried to make his escape through the back door but was shot six times and killed.

Several other houses were targeted that night but the targets had by now realised the dangers and were able to hide or leave their houses.

Failing in their efforts in town the murder gang regrouped and went to Turtulla House looking for Denis Regan. They found Denis’ employer and, when they threatened to shoot him, Denis gave himself up and was taken outside where he was shot six times, miraculously surviving to tell the tale.

And so ended a very bloody week in Tipperary 1921, from the Wednesday to the following Tuesday seven Republicans had lost their lives 3 to RIC and 4 to the military.

The grief-stricken families and communities mourned and buried their dead and prayed for peace.

Please join us to commemorate these events on the night of Saturday March 6 at 7:30pm Details are available on the Comóradh na nÓglach Facebook page or contact Niamh on 083 8198901 for the link.