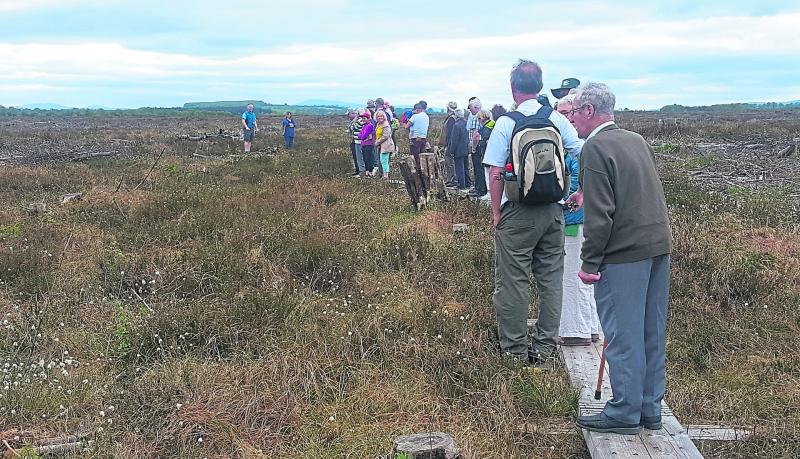 The Cloughjordan Community Development Committee have been awarded a grant under the National Peatlands Community Engagement Scheme to carry out a habitat survey and mapping exercise at Schohaboy Bog Natural Heritage Area which lies to the North of Cloughjordan village.

Under the scheme, project funding for 25 local community groups and organisations for a variety of peatlands related projects across Ireland was announced by Malcolm Noonan T.D., Minister of State for Heritage and Electoral Reform from a diverse range of initiatives put forward by community and volunteer groups and environmental organisations.

The Cloughjordan Group are the only Tipperary representation in the national scheme and local councillors Ger Darcy, Michael ÓMeara and Deputy Michael Lowry TD have welcomed the grant award to Cloughjordan.

Plans are being made by the community group to host Minister Noonan for a visit once Covid restrictions deem it safe to do so.

The Minister has praised the important peatland work being done by communities and organisations; “I know from my own experience that hands-on local action can have enormous positive impacts - not just for nature and biodiversity, but also for people in terms of physical and mental health and wellbeing. Investments in nature deliver enormous social value, which is especially important in these challenging times.”

The Cloughjordan group are the Community Partners in the Raised Bog Restoration Programme at Scohaboy, a programme that has seen two significant conservation intervention measures to date at the bog.

The first in 2013 was as part of a national EU/LIFE funded project with Coillte Forest and the National Parks and Wildlife Service, with Scohaboy designated one of the two national demonstration sites (the other was Girley Bog in Meath).

The second restoration project took place at the end of 2020 funded by the NPWS and the Department of Housing, Local Government and Heritage as part of their commitments to the National Raised Bog Special Areas of Conservation (SACs) Management Plan 2017-2022.

This project saw contractors on site for over 6 weeks and in that time they installed 2000 peat dams, 4 kms of Contour Bunding and 2 kms of Cell Bunding on the high bog.

The aim of these works is to raise the water table in order to create the conditions for the unique peatland ecology to re-establish and thrive.

Schohaboy is the first place in Ireland to trial Cell Bunding and is a national demonstration site for this restoration technique.

To date over 200 ha of raised and cutover bog has been targeted by restoration works and Scohaboy is recognised as an excellent example of how State agencies and a local community group can successfully collaborate in the protection of a key natural heritage location as well as helping to meet national conservation objectives.

Raised bogs like Scohaboy are increasingly rare and represent some of the last surviving examples of this habitat in the Atlantic region of the EU and as such are internationally protected under the Habitats Directive.

According to the restoration programmes `community coordinator`, Gearóíd Ó Foighil, "peatlands are the superheroes of ecosystems: purifying water, sometimes mitigating flooding and providing a home for rare species. And they beat nearly every system when it comes to carbon storage. Known peatlands only cover about 3% of the world’s land surface, but store at least twice as much carbon as all of Earth’s standing forests combined. In addition, at least one-third of the world’s organic soil carbon, which plays a vital role in mitigating climate change and stabilizing the carbon cycle, is in peatlands".