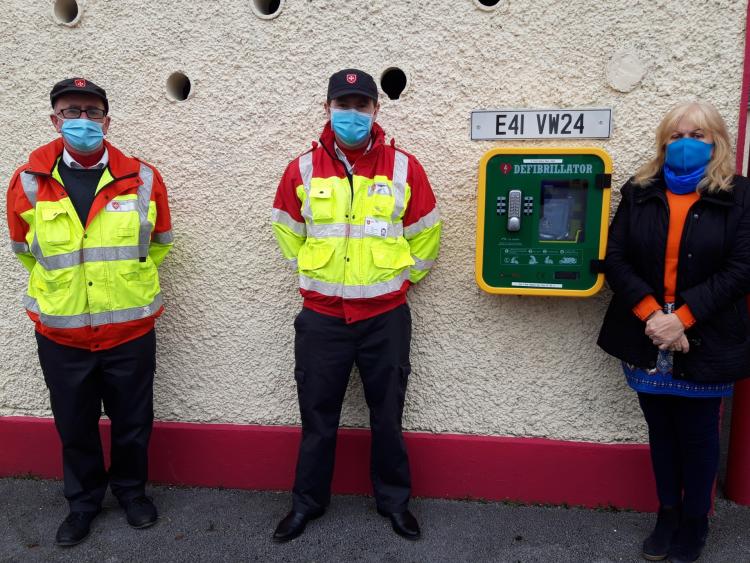 A defibrilator which had been in the care of Willie Sweeney, Church View, Littleton has been relocated to Littleton National School and is clearly visible to all who walk or drive by the school.

It was formally handed over by Patricia Loughnane from the Moycarkey Two Mile Borris Community Alert group, who generously provided a new cabinet with a coded lock, to keep the defibrillator safe and accessible to those in need.

Ger Fogarty accepted the defibrillator on behalf of the Order of Malta. They will carry out regular checks so that the machine is kept in good working order.

Sixteen years ago , a group of volunteers working with Paddy Graham and Willie, raised funds for the purchase of two defibrillators which under the care of the Order of Malta have been at the service of local needs ever since.

Unfortunately Wilie will no longer be on call to respond to local needs as he has recently returned to Ard Mhuire, Thurles, very near to his family home and where he worked some of his juvenile years in Sweeney's Bakery which is now being rebuilt as a Medical Centre.

He has been called out day and night on many demanding and life-saving missions. In the early years he was helped by Shane Kerwick and in later years formed a team with Paddy Graham and his extended family. Their dedication and on-going training enabled them to counsel and support family members in times of crisis and loss.

Due to the confidential nature of their work, it is done quietly and often includes bringing patients for hospital appointments.

While returning to Thurles Willie has had lifelong connections with the Littleton area. He spent his childhood summer holidays with his uncle Jimmy and aunt Nora Foley ,nee Sweeney in Liskeveen, where he learnt how to save hay and foot turf in the nearby Killeens Bog.

His recently deceased wife Marion Maher was from St. Kevin's Park, Littleton. He joined the Moycarkey Borris Sean Treacy Band in 1971, playing as a base drummer and on many occasions has led out the band for major sporting occasions at Semple Stadium.

At parish level he has been actively engaged in fund-raising for the Order of Malta which helped fund the purchase of an up to date ambulance for local and wider service.

Willie has received numerous messages of good will and gratitude from the many he has helped at personal and professional levels. He has expressed sincere thanks to all who were his companions and for the many happy moments of chat and banter that was part and parcel of many hours of voluntary community work.

While remaining an active member of the Order of Malta and the Sean Treacy Band he will also continue with the Ballymoreen Graveyard Committee where he has dedicated a lot of time since 2012. On a bi-annual basis he quietly paints the large concrete crucifixes in Littleton and Ballymoreen graveyards.

While leaving he hasn't really gone as the life of village and town are more and more integrated. We wish him every blessing and renewed energy for the years ahead.

Should Moycarkey Borris in the coming years make it to a County Final against Thurles Sarsfields his true loyalty might be tested. However in leading out the Band he would have a leg in both camps and can celebrate with victors and vanquished whatever the result.

Currently there are different procedures in place for the defibrillators in Moycarkey-Pouldine N.S. , T.M. Borris (details in Church) and Littleton N.S.

1. Call 112/999
2. Ask for Ambulance Service
3. Give EIRCODE located above the OMAC AED defibrillator
4. Give your details as requested
5. You will be given the KEYPAD ACCESS CODE
6. RETURN AED to cabinet ASAP after emergency
7. Ensure the cabinet is CLOSED securely
8. Order of Malta assistance tel: 087-2390111 (24/7)

The Order of Malta generously accepted Willie Sweeney's proposal to relocate his AED defibrillator in the village. The Moycarkey, Littleton, Two Mile Borris (MLTMB) Community Alert arranged with Littleton N.S to have it accessible to the public and their pupils 24/7.

Currently, the way to access it is via the details above. Hopefully, some fully trained volunteers of the Littleton community may come forward as Points of Contact in the area to assist in someone's hour of need.

The Order of Malta will resume training once Covid 19 restrictions are lifted.