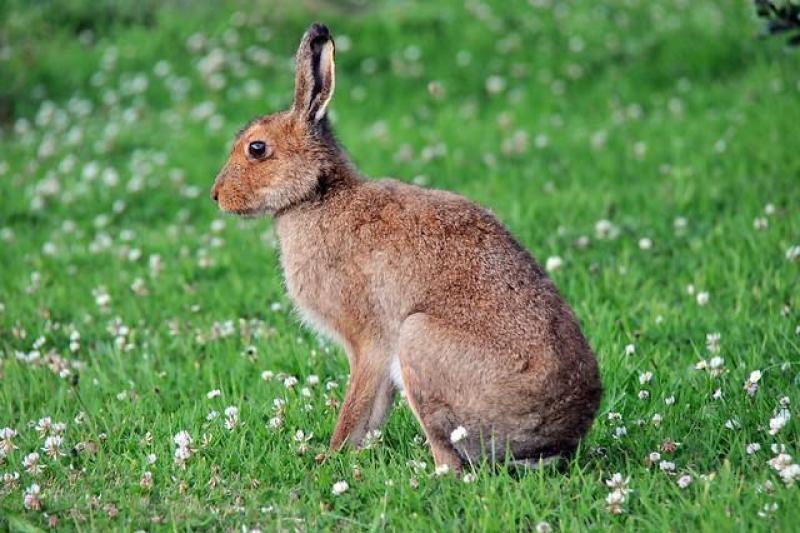 There was great excitement in my son’s voice as he dropped his bag on the floor after a long day at school. The first question as usual was their food ready and like all growing boys he has a hearty appetite.

Next he checked the weather and if I had anything on zoom and could we squeeze in a walk?

As he ate his dinner he recounted the morning’s bus trip. This daily journey is still a novelty, as before he started secondary school the only time he was on a bus was to go swimming at school or the eagerly awaited summer day trip.

He often spots a good location to go for a walk but today they got stuck behind a slow moving tractor and as spring progresses this becomes a part of any country drive. The tight and bendy roads make overtaking a huge risk and we generally have to sit back, be patient and take in the view of the countryside, while waiting for an opportunity to overtake.

Harry got a great view of a large field and he has keen eyesight and spotted a share. We have seen them several times together on our walks, up in the conifer plantations and in the field by the walking track. I was confident in his identification and especially when he described the long legs and ears and the way it was running through the field.

For me hares were creatures that were never that common and they seem to have got even scarcer over the last thirty years. When I was growing up I used to love Sunday mornings as there was no school and Saturday was work day around the house or with my dad on the buildings.

I would be up at the crack of dawn and during March heading for a large field around a mile from my house. I found a comfortable spot on the high hedgerow bank and waited patiently as the sun came up. The first hare emerged from the long grass a few minutes after the sun started to march across the meadow. He would stake a claim in the very middle of the field and was soon joined by several others.

Mad as a march was an expression I often heard when I was younger and in early spring these fascinating animals lived up to their reputation and were observed boxing in the fields. At first there would be a lot of posturing and nibbling of grass as everyone sized up a potential rival or partner. Next scuffles would break out and these involved short chases but nothing too serious.

The hares would settle down again and then the real entertainment started.

Next two hares would approach each other and dash the last few meters and stand for a moment on their long hind legs. They used their other legs to box briefly but this was merely butterfly stuff and I never saw these boxers get any serious injuries.

For years it was considered typical male behaviour as they boxed to see which was the strongest and fittest to father the next generation.

But research on the natural world is always evolving and this indicates that the female hares box as well. Female hares are slightly bigger than the males so are able to boss them around. Boxing hares are now considered to be a dominant female boxing a subordinate male.

The hares I normally see have the typical brown fur with a white belly and fluffy white tail. In different parts of the country the hares coat or fur can be much darker.

In Scotland hares that live in the mountains turn white in the winter and this is generally excellent camouflage. Climate change is starting to have an effect as the snow is later or retreating but the animals still change their coats. This means they are easily spotted by predators.

In Ireland some hares get patches of white but they never attain the same level as their Scottish cousins.

In prime breeding condition, and with a plenty of food, females can be recorded having up to three litters. The average litter size is to five babies or leverets. Hares do not make burrows like rabbits and they use a shallow depression in long grass called a form. They hide in long grass during the day and the female will fed them in the evening

The young are born fully covered in fur and with eyes open. Like many creatures, hares rely on their sharp eyesight to spot predators and their great speed to escape them if necessary.

Hares often wait till the last minute before bolting and like us the shock of this exploding animal stuns the predator like a fox and the hare makes its escape.

One of my favourite bedtime stories when I was little was Aesop’s fable of the hare and the tortoise. The hare was always boasting of how fast it was and laughing at the slow tortoise. They decided to have race and the hare disappeared into the distance.

He felt he was so far ahead he stopped for a rest and the plodding tortoise passed him out and won.
Comments/ questions to albert.nolan@rocketmail.com or 089 4230502. Albert is also available to give walks/ talks to schools, tidy towns, youth and community groups.