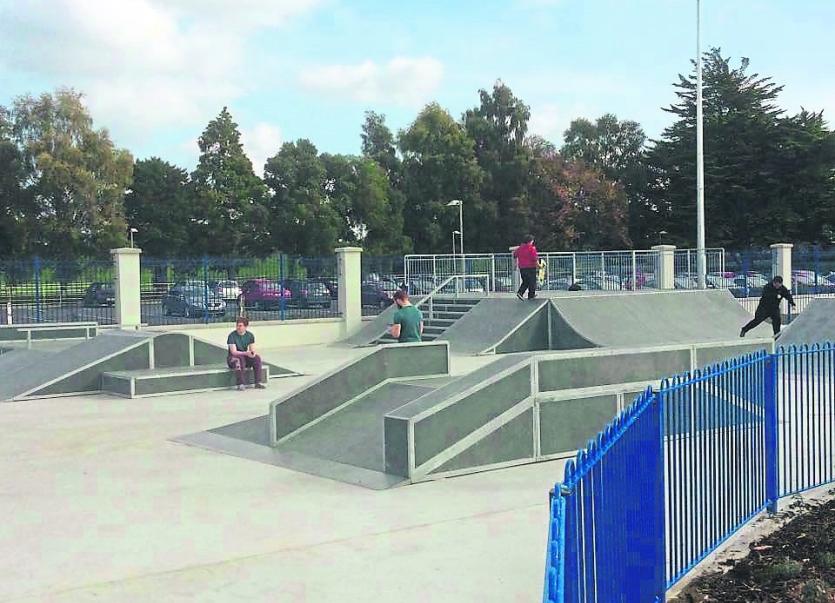 Thurles skate park, above, was recently vandalised, and teenagers have been harassed in public, according to a Thurles councillor

CCTV is urgently needed for Thurles’ town park as children are being routinely assaulted and bullied there, according to a Thurles based Councillor.

Cllr Jim Ryan was supporting a motion by Cllr Sean Ryan at this month’s County Council meeting, that funding should be found for CCTV cameras in public areas of Tipperary’s towns and villages.

The “red tape” and “bureaucracy” involved in the legislation surrounding GDPR and the protection of personal data meant that playgrounds and other areas where underage people congregate are now subject to delays in providing CCTV.

Two weeks ago, a skateboard park in Thurles was vandalised to such a degree that it cannot be used.
“A huge amount of teenagers” use the park, who would not otherwise be involved in sport, but it’s now “out of action for the foreseeable future,” said Cllr Ryan. “If CCTV was there, those vandals would have been caught.”

“I have been contacted by parents. Teenagers have been physically assaulted, and bullied, because there are no CCTV cameras. People are being put at risk. One mother’s son was seriously assaulted and ended up in hospital for two weeks, and close to death.”

If there is a problem with GDPR, then the laws “need to be changed.” “Somebody is going to be killed. I am not exaggerating. Young children have been assaulted. Those GDPR laws are farcical and need to be changed. The County Council is being held back,” added Cllr Ryan.

Cllr Ger Darcy supported Cllr Sean Ryan's call for CCTV rollout. “There's a lot of traffic passing through the Main Street of Borrisokane, about 8,000 vehicles per day,” he said.
“If CCTV was installed, it would be a great comfort for local people and the gardaí.”
Cllr David Dunne said he would urge caution. “There's been CCTV in Carrick-on-Suir for a number of years, but it hasn't led to one conviction. CCTV is not the be all and end all.”

If towns are suffering from anti-social behaviour, measures should be put in place to vent the “pent up frustration”. There are better use of resources, such as installing ziplines or other activities for young people.

“Not even one case has been brought to court successfully because of CCTV,” added Cllr Dunne.
Council official, Pat Slattery said he talks to the Superintendent about this “at least twice a month.”
“Local gardaí are in favour of having the station used to store CCTV recordings,” he said.

Councillors heard that data protection laws can be used to challenge CCTV, especially at playgrounds.
However, one of the cameras in Carrick is placed near a playground, but it's “out of date” and would cost €180,000 to replace.

“It's a significant cost to update,” warned CEO Joe MacGrath.
“Once you put in CCTV, you have to be conscious of that.”