Bríd McMaugh will perform in next Sunday's episode 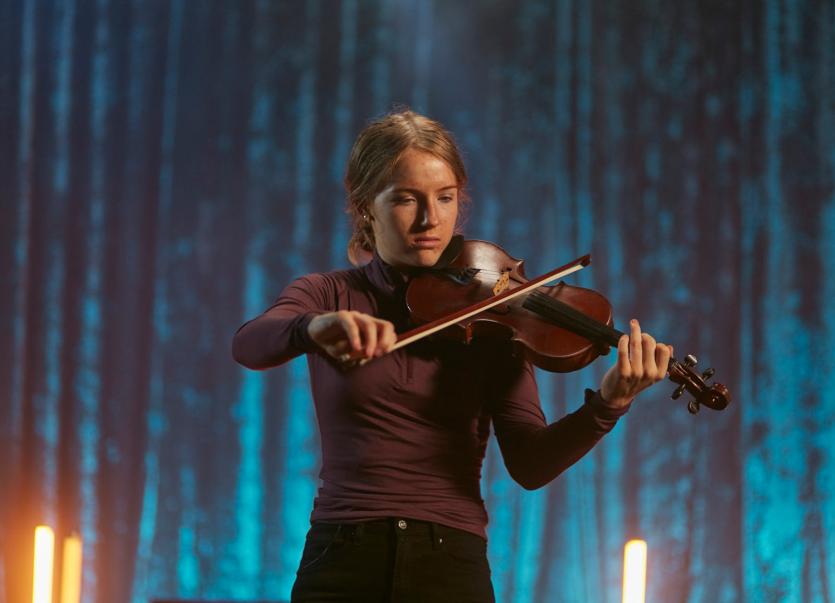 In a year like no other, the makers of Cork Folk Festival have curated a feast for the senses for followers of traditional and folk music bringing the best of local and national artists to our screens.  This new six-episode series recorded at the Cork Folk Festival in October 2020 just before the second lockdown, brings us some of Munster’s finest performers along with friends from further afield.

Filmed in some of Corks most iconic venues, the now sadly closed Kino, Cork City Gaol, St Luke’s and Cork Opera House, the series of concerts and performances filmed behind closed doors can now be shared with all music lovers.

The episode on May 23 at 9.30pm features Ballymacarbry fiddle player Bríd McMaugh, who attends Loreto Secondary School in Clonmel. The 16-year-old has already performed on television being one of the guests alongside Frankie Gavin on an episode of ‘Sé Mo Laoch' on TG4. She plays regularly alongside Emma Corbett and Cian Smith. Performing from The Kino in Cork’s city centre, Bríd plays O’Carolan’s Farewell to Music and The Oak Tree.
We also meet musicians Richard Lucey and Jim Murray. Richard Lucey, from Inchigeela Co. Cork, is regarded as one of Ireland's leading accordion players. He has performed with many bands - such as Altan and North Cregg. He has toured with Fiona Kelleher on the Music Network 'Sullane Sessions' and also plays regularly with the Ger Wolfe Quartet, with Jon Saunders and also with Jim Murray at many festivals and events. This Sunday on TG4’s Cork Folk Festival, Richard comes to us from the wonderful St’ Luke’s in Cork accompanied by guitarist Jim Murray.Jim is one of the world’s leading traditional Irish guitar players. The Cork native has been touring for over twenty, performing and recording with artists such as Sharon Shannon, Sinead O’Connor, Steve Earl, Shane McGowan, Seamus Begley, Mike McGoldrick, Altan and Mary Black.  He also released two critically acclaimed albums with long term partner Seamus Begley in 2001 and 2008 which collectively scooped many prestigious awards such as The Irish Times and Hotpress Traditional Irish Music Album of the Year.

Also performing in this episode is The Lee Valley String Band. This group is Ireland's longest-lived bluegrass and old-time. They perform to huge audiences annually through their regular gigs with the Lee Sessions. Formed in 1968 by the late Chris Twomey and the Toner brothers, Niall and Colm, the LVSB have been through several permutations in their forty-seven years, and now comprise Mick O'Brien (guitar, vocals), Brendan Butler (mandolin, vocals), Mick Daly (banjo, vocals), and Hal O'Neill (fiddle). Some of their highlights to date include hosting their own TV show from Cork Opera House; appearing at the prestigious Tønder Festival in Denmark; and making three classic recordings. The Lee Valley have a long history at the Cork Folk Festival and appear tonight from the main stage at the Cork Opera House.
Well-known Irish folk-rock singer-songwriter Luka Bloom (born Barry Moore) from Newbridge Co. Kildare also takes to the stage. He is the younger brother of Irish folk singer Christy Moore. He released 3 albums under the name Moore and in 1987, Moore moved to the United States and began performing using the stage name of ‘Luka Bloom’. Bloom who now lives in Co. Clare has released over 20 albums, including Riverside, Innocence, and his latest album Out of the Blue. On this show, from the historic surrounds of Cork City Gaol, Luka re-visits his biggest hit City of Chicago.

The 41st annual Cork Folk Festival brings us the very best of traditional and folk music in both intimate and large-scale settings. Opening its doors for the first time since lockdown in March 2020, from the Cork Opera House stage the festival presents Cork stalwarts The Lee Valley String Band, and Karan Casey with Niamh Dunne and Seán Óg Graham. This iconic venue also showcases Mother and daughter duo Mairéad Ní Mhaonaigh and Nia Beirne with Manus Lunny from Donegal, young Dubliners, The Bonny Men, the incomparable Strung collective, and celebrating his new album, Cork maestro himself John Spillane with Pauline Scanlon.

Presenter Doireann Ní Ghlacáin, a renowned fiddle player and singer steeped in the musical tradition of the Ó Riada and Glackin families – brings us warm, informal, bilingual interviews with the musicians themselves in between pulsating performances from an array of talented artists.

Directed by Maurice Linnane, produced by Ciarán Ó Maonaigh and Executive Producer Niamh Ní Bhaoill  ‘Cork Folk Festival’ series 2, will be screened on TG4 beginning on May 2nd  at 9.30pm

This email press release has been sent to you by Linda Ni Ghriofa from TG4.
To unsubscribe and no longer receive these press releases use links below