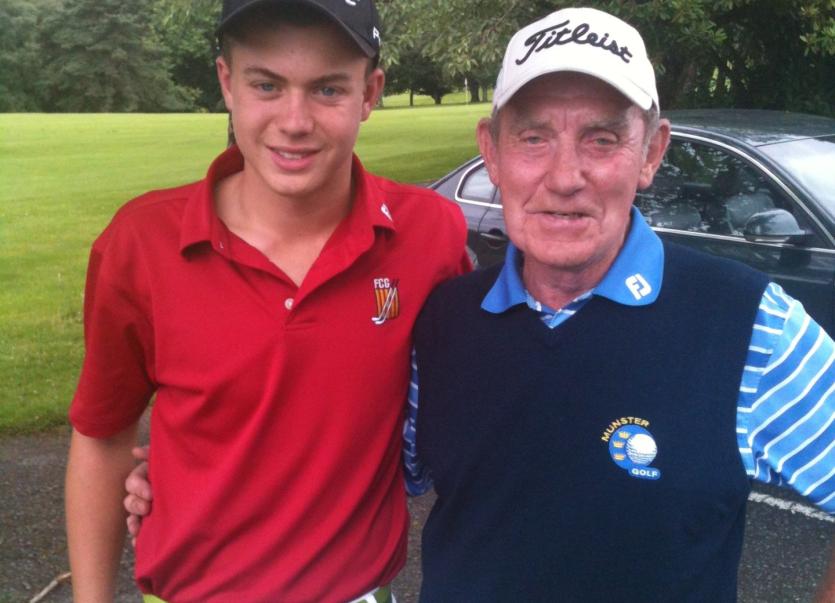 Eduard Rousaud (left) being congratulated by John Fennessy after winning the Munster Boys Under 16 Amateur Championship in 2015 when he set a new course record of 64. The record still stands today.

Our photo above is a flashback to 2015 at Clonmel Golf Club when a 15 year-old Spanish golfer, Eduard Rousaud, competing in the Munster Boys Under 16 Amateur Championship, set a new course record of 64 to win the competition.

He was congratulated afterwards on the occasion of his magnificent seven-under par round by Munster GUI official, and Clonmel Golf Club member, John Fennessy, who predicted a very promising career ahead for Eduard.

And that prediction seems to be bearing fruit, as last weekend at Portmarnock links golf course, Eduard competed in the Irish Challenge professional tournament, part of the European Tour, and finished runner-up to Holland’s Dan Huizing after a play-off, the Dutchman taking home the first prize of €35,200.

Incidentally the course record prior to 2015 at Clonmel Golf Club was held by local golfer Gavin Smyth who recorded a seriously impressive 65 in 2011 in the President's Prize (Donagh Dougan) Qualifier.

And, while we are at it, Gavin's father, Frank Smyth, has the distinction of once playing a round of golf in an official European Tour event. It happened in 2013 when Frank was one of two Irish golfers from 1,500 entries who won their way to an all-expenses trip to South Africa to play in the Volvo World Golf Challenge. In Durban, Frank played in the company of professionals Jose Maria Olazabal and Marcel Siem of Germany, with Frank, not in the least bit fazed, managing three birdies in his own round.

The event was won, not by Frank Smyth, but by South African Louis Oosthuizen, a former winner of the British Open.

Who knows, maybe someday Eduard Rousaud's name might be etched on the Claret Jug.