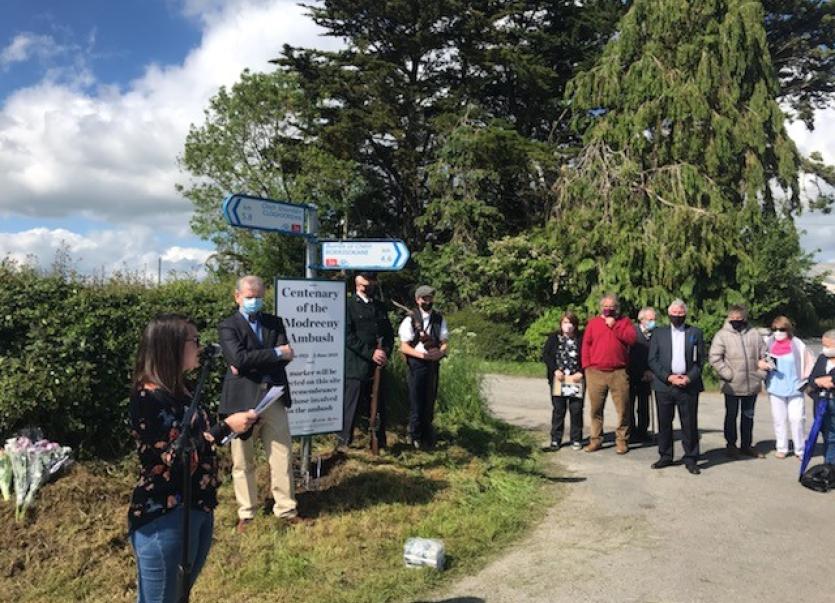 Caitlin White, from Nenagh, a Ph D candidate in Modern History at TCD, was guest speaker

The Centenary of one of the most deadly engagements of the War of Independence in Tipperary was remembered at an event held on June 3, 2021.

One that day, at 10.00 am one hundred years ago, an IRA Active Service Unit or ‘Flying Column’ ambushed a party of 28 RIC police travelling in cars and on bicycles between Borrisokane and Cloughjordan at Kylebeg, near Modreeny.

The sudden and swift eruption of intense gunfire in the tranquil countryside left four policemen dead and five badly wounded.

They withdrew without injury after the ambush and made good their escape towards Knockshegowna. Crown Forces burned six houses in the Cloughjordan area as an official reprisal for the attack.
Tipperary in the Decade of Revolution Group, supported by Cloughjordan Heritage and Drama Groups, hosted the small function, in compliance with Covid regulations, to remember this dramatic event appropriately at the site on the day of the Centenary.

The event was attended by relatives of those involved on both the IRA and RIC sides. Wreaths and flowers were laid in memory of the generation involved in Ireland’s struggle for statehood, as well as those affected directly by the event. Speakers from families present noted how little or nothing was said about such events by previous generations.

Guest speaker Caitlin White from Nenagh, Ph D candidate in the Public History Department of TCD, highlighted the importance of remembering and telling our history using the available sources.
As we move from the Centenary of the War of Independence into that of the Civil War, she noted the importance of accepting there are differing, but equally valid, perspectives of historical events such as Modreeny.

“Commemorating the events of one hundred years ago probes and challenges our perceptions of those events. We - representatives of both sides of the conflict and none - stand here today and share, listen and question as we remember. In so doing, we respect that there are different perspectives and there are complexities in the event we are remembering. This helps us create a more authentic construction of the past, and our understanding of it. It is these kinds of constructions that are crucial in the model of Ethical Remembrance promoted by President Higgins and others” – she said.

She cited the example of two of the men on the IRA side at Modreeny, both from the village of Moneygall, Jack Collison and Joe Mangan, who would be killed fighting on different sides in the Civil War, which followed the Truce called just a few weeks after the Modreeny ambush.

Tipperary in the Decade of Revolution have produced a high quality 50 page Centenary Booklet by local historians Seán Hogan and Ger Heffernan telling the complex story of this attack.
The booklet is available for €5 at the MacDonagh Centre and at Sheela na Gig bookshop in Cloughjordan.