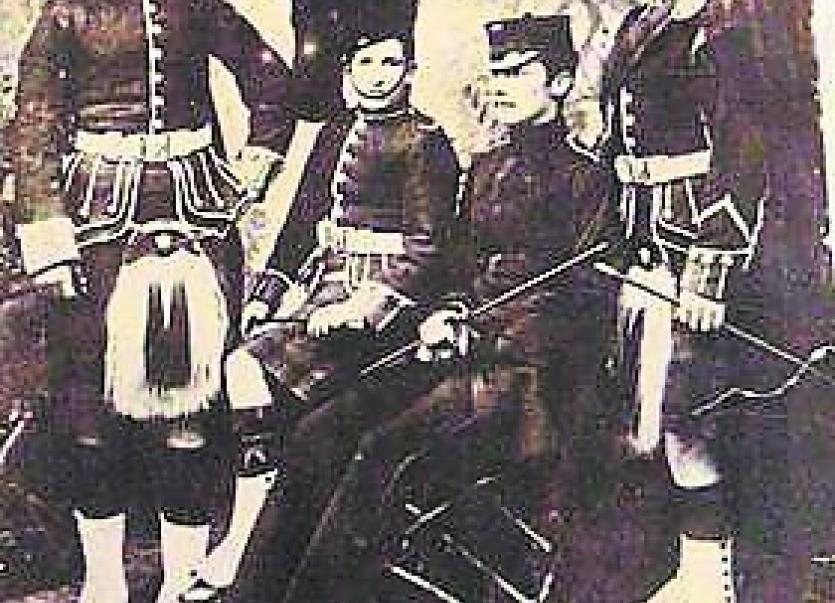 Photo of Brothers Bertie, Edgar, Gus and Oscar Hennessy commissioned by Gus before their departure around 1898

This year marks 120 years since the death of Lance Corporal Bertie Hennessy, a soldier of the 1st Battalion Gordon Highlanders Regiment, who was killed at the Battle of Graspan, Reitz, South Africa, on June 6, 1901.

Ernest Albert Hennessy was born on August 17, 1880 in New Barracks (present day Sarsfield Barracks) in Limerick City. To his family and friends, he was known as ‘Bertie’. He was the second eldest son and child of Roscrea native, Philip Hennessy and Julia Kearney, the daughter of a blacksmith from Newry in Northern Ireland. Philip was a veteran of the 1857 Indian Mutiny and upon his discharge from the 75th Stirlingshire Regiment, he met Julia while stationed in Newry and got married there at St. Mary’s Church of Ireland on 1 December 1875.

Philip continued to serve in the army, first in the Louth County and King’s County Rifles, then as an orderly clerk in the military department. In total, they two daughters and six sons, who followed in the footsteps of their father by serving in the British army. They eventually settled in Nenagh, Co. Tipperary, where Philip was appointed as Superior Barrack Sergeant.

For some unknown reason, Bertie was baptised as ‘Joseph Ernest’ Hennessy at Parsonstown Church, King’s County (present day Birr, Co. Offaly), a name he never used in future documents. He was recorded as the godfather to his youngest sibling, Mary Vincent Julia ‘Gladys’ Hennessy, who was baptised on August 16, 1897 in St. Mary’s of the Rosary Church in Nenagh.

Like his eldest brother, Augustus Philip George ‘Gus’ Hennessy, Bertie served in as a pupil teacher in the Royal Hibernian Military School in the Phoenix Park, Dublin. However, with the outbreak of the second South African War between Britain and the Boer settlers in 1898, he decided to enlist in his father’s former regiment and serve as a Highlander soldier, just as his brothers Oscar Percy ‘O.P’ Hennessy and Thomas Edgar Hennessy were doing at the same time.

Before they embarked to South Africa, their father, Philip Hennessy, died unexpectedly at Summerhill Military Barracks on June 21, 1899. He was buried at Kilruane Cemetery, located a few miles outside Nenagh.

Bertie served with the 1st Battalion and his service number was 6418. He was stationed at the regimental depot in Edinburgh Castle before being mobilised for service on October 2, 1899. He arrived in Capetown on November 29 after the regiment travelled by sea on the Cheshire liner.
Letters written by the three sons (Bertie, Oscar and Edgar) to their family back in Nenagh were published in local newspapers within a few days. They described the events in South Africa, which gave the local people an insight into the fighting between Irish soldiers from the district against the Boer Warriors. Bertie recalled in a letter to his brother Gus, how:

‘I can tell you the shelling at first made me and every other man wish we were safe at home. It was terrible, the shells passing five or six feet over where we lay, striking the boulders we were behind, and at other times bursting, in which case the shrapnel makes a noise something like a threshing machine, but a thousand times louder, and when it lands for a space of 30 square yards, it tears up the artillery then shelled and so ended Thaba Kop.’ He also recalled during a battle how ‘He (the Boer) pretended he was wounded at the Battle of Modder River, and when the officer went to give him aid he shot the officer dead. He was taken prisoner, tried for treachery and cowardice and shot by the troops in de Aar’.

The following is an extract of a very poignant letter Bertie wrote home to his mother, dated June 19, 1900:

‘Now, mother, I am glad to say the war is almost all over, and I do not think Edgar or I will do any more fighting…Cheer up mother, I know you are thinking every day is a year until this war is over and your sons are safe. Cheer up, be proud of us, and look forward to the day when we shall come home, with our medals on our breast, and can say we have done our duty both to our Queen and country’.
This would not happen for Bertie, as he would still be fighting a year later and would meet his end, never to return home to Nenagh. On one occasion, Bertie carried messages to commanders under heavy fire, where he should have been awarded a special title for this, had his name been written on record for credit.

However, the morning after ‘when inquiries were made, another Corporal claimed the honour of having carried the message. This corporal was created King’s Corporal on the field - an honour which falls to few, and which means that it is by the King’s signature can he be reduced to the ranks’. Bertie was not given the title he deserved and did not seek it, as he was described of ‘being of a modest disposition’ Over the course of the Boer War, he fought in the battle of Ladysmith, Magersfontein, Paarderberg, Hout Nek, Doornkop, Pretoria and finally, Reitz.

On June 6, 1901 during the Battle of Graspan in Reitz, the D Company Highlanders and 6th Mounted Infantry were ambushed by the Boers, where a firefight ensued for 3 hours.

To try and give an opportunity for his comrades to escape, Lance Corporal Hennessy led a ‘forlon hope’ against the Boers, but ‘he was promised support, and with a shout charged the laager under which they were secreted, but none of those who volunteered to accompany him closed up behind him’.

As a result, Bertie made it about 200 yards and was shot numerous times by the enemy. Shortly afterwards, other members took up his position and secured it. When they recovered Bertie’s body, it had been discovered that ‘he had been pierced by 53 bullets, which, by a strange coincidence, represented the 53 engagements he had been in before his death’. He was one of 10 Gordon Highlander soldiers killed on that day, where a further 9 were wounded. The Boers had 17 killed and 17 wounded. Bertie was buried in the nearby cemetery in Reitz.

His death was lamented by the people of Nenagh, where local newspapers reported ‘Corporal Hennessy’s sad and early death is deeply regretted by his former classmates at the Nenagh Christian Schools, where he was a very great favourite with his teacher, Rev. M.S. O’Farrell and the other members of the community’.

In July 1901, Bertie’s younger brother, Charles Frank Philip ‘Charlie’ Hennessy was given an award for academic excellence in the presence of the Duke of Connaught at the Royal Hibernian Military School. During the presentation, Colonel Hall made tribute to Bertie’s bravery and death only a month earlier, which was still very emotional for the Hennessy family. As a result, Charlie ‘in spite of his strong efforts, his grief burst out, and he received the award with the strong tears trickling down his face’. The crowd in attendance showed nothing but compassion and sympathy towards the 11 year old boy.

Sadly, Charlie never got to serve in the military like his brothers, as he died on August 6, 1903 at the military school, aged 13. Bertie’s mother Julia had seen her husband and two of her sons die within a period of five years. She died at Nenagh Workhouse on March 9, 1914, where she was described on her death record as ‘alcoholic’. A few months later, three of her sons went to war, once again.

Oscar and Edgar both continued to serve in the army after the Boer War ended in 1902, where they both fought in France in the First World War, along with their brother Randolph Rudolph Julian Hennessy, who served in the RASC in Cairo, Egypt.

Sergeant Julian Hennessy was awarded the meritorious Service Medal in 1917 and was wounded in fighting in 1918. Sadly, Julian became ill and died on August 31, 1920 in Hounslow Military Hospital in England while attending the Cadet School, aged 29 years.

Edgar became army recruiter in Glasgow after his discharge and had a family. He died in Scotland on May 9, 1959, aged 74. Gus continued to serve as an army schoolmaster in Pakistan, India, Ireland and England until the 1940s and had two sons who served as officers in the Indian Army, who both died young and never married. He died in Dundrum, Co. Dublin, on May 5, 1953 in Dundrum, Co. Dublin, aged 76.

Oscar was awarded the Military Cross for his bravery at Festubert in 1915, where he was severely wounded after saving the lives of his officer and four wounded comrades while under enemy fire. His family fled Nenagh during the War of Independence, where they moved New Ross, Co. Wexford, before finally settling in Derby, Liverpool. Oscar was struck down by a car there and killed on 25 October 196 , aged 80. Mary Vincent was raised in a convent after their mother’s death and travelled to Australia to work as a nurse, where she married a navy officer in Melbourne in 1929. They settled in Hampshire, where she died in 1984. Unfortunately, little is known about Norah Hennessy, but it appears she went to Blackburn, England and worked as a cook. She died there in 1943 and was never married.

Acknowledgements:
All the information was gathered from newspaper archives, National Archives UK and Ireland, national Library of Ireland, genealogy websites such as Ancestry and FindMyPast and other online platforms. Special thanks to the Volunteer researchers at the Gordon Highlanders Museum in Aberdeen and to Mike Hennessy (grandson of Oscar) for the photographs. Without the contribution made by everyone involved, this would not have been possible.

Appeal:
Michael J. Reynolds is a recent undergraduate from University of Limerick, who has a keen interest on the military history of Nenagh, Co. Tipperary, where he resides. Over the past year, he has carried out extensive research on the Hennessy family of Summerhill and the role of Nenagh in the British army. Anyone with information on the British army in Nenagh or Irishmen from Nenagh district who served in military campaigns, can contact him by Phone/WhatsApp: +353 83 016 2768, or email: pastlinksgenealogyservices @gmail.com