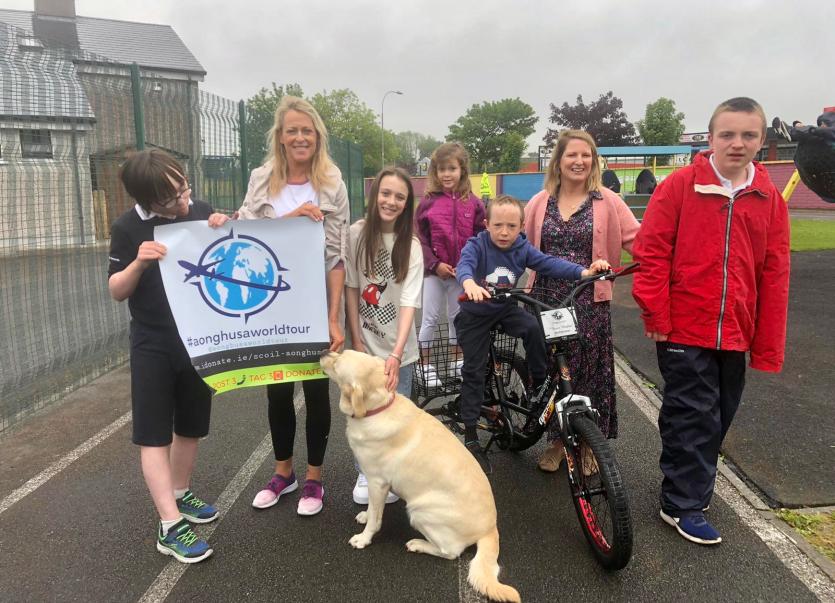 A Thurles family has used its experience in the cycling business to bring new joy to a special needs school in Cashel.

The school would like to extend a very special thank you to Angela Corcoran (McNeill) and the late Jim Corcoran, their children Charlie, Libby and Poppy and Stephen McNeill, proprietor of Mc Cycles, Bohernanave, Thurles who sponsored a new trike for Scoil Aonghusa, Cashel.

The trike was presented to the school at the launch of Scoil Aonghusa's 24-hour Moveathon on Friday, May 28, and is being enjoyed thoroughly by many pupils. Ciaran O Flynn Jewellers, Thurles donated the engraved plaque on the bike.

The trike will help to increase the independence of the pupils of Scoil Aonghusa when cycling by giving a feeling of safety on three wheels.

Separately, in April, Scoil Aonghusa launched its most ambitious fundraiser yet, called #aonghusaworldtour - Around the World in 80 Days, which readers can still contribute to.

Funds raised will be used to further develop the school and campus on the Cahir Road, Cashel. “In order to cover the approximately 45,000km in 80 days we are asking people to run or walk 3km for us, post their pic using the hashtag #aonghusaworldtour on Facebook, Instagram or Twitter. Tag three friends to do the same.”

Donations online to www.idonate.ie/ 1587_scoil-aonghusa.html “As we reach each of our destinations around the globe, our pupils will celebrate that country's culture, food, sport and dance and we'll share it all on our social media platforms. Daisy, our school’s support dog, will lead the charge as our tour mascot.”