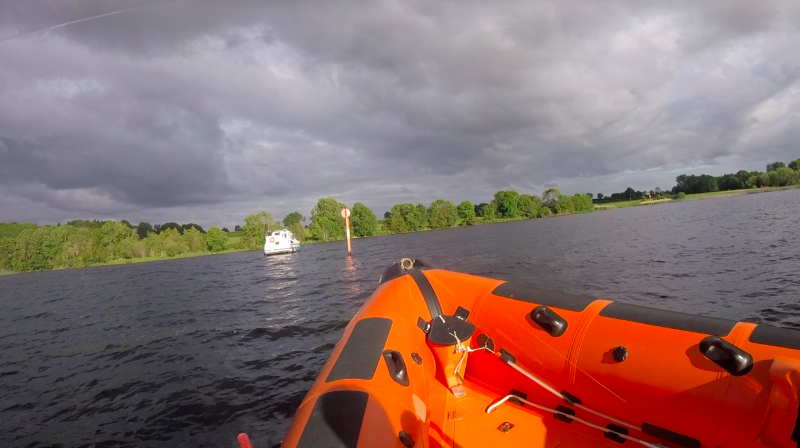 Valentia Coast Guard requested Lough Derg RNLI lifeboat to launch this Wednesday evening to assist two people on a 32ft cruiser aground close to the entrance to Terryglass Harbour, at the northern end of Lough Derg.

At 6.48pm the RNLI lifeboat Jean Spier launched with helm Eleanor Hooker, Steve Smyth, Joe O’Donoghue and Tom Hayes on board. The winds were westerly, Force 3/4. Visibility was good.

At 7.08pm, the lifeboat arrived on scene and could see the cruiser aground inside the navigation marker by Terryglass Harbour.

After assessing the location and depths, the lifeboat made a careful approach to the casualty vessel, all the time taking soundings of the depths. Once alongside, the RNLI volunteers found both passengers on board to safe and unharmed and wearing their lifejackets.

A lifeboat crew member transferred across to the cruiser, and, after making a thorough check of the boat to ensure it was not holed, set up for a tow.

The lifeboat found the casualty vessel to be stuck fast on the rocky shelf. Two marine engineers from the cruise hire company arrived on scene with a tow vessel, but were also unable to get the vessel off the rocks.

The lifeboat took both passengers and their RNLI crew member on to the lifeboat and into Terryglass harbour, where arrangements were made for both casualties to stay on shore overnight and their boat to be refloated this Thursday morning.

Brendan O’Brien, deputy launching authority at Lough Derg RNLI has advised boat users to "plan your passage, study your charts and identify the navigation marks for the harbour to which you are travelling".