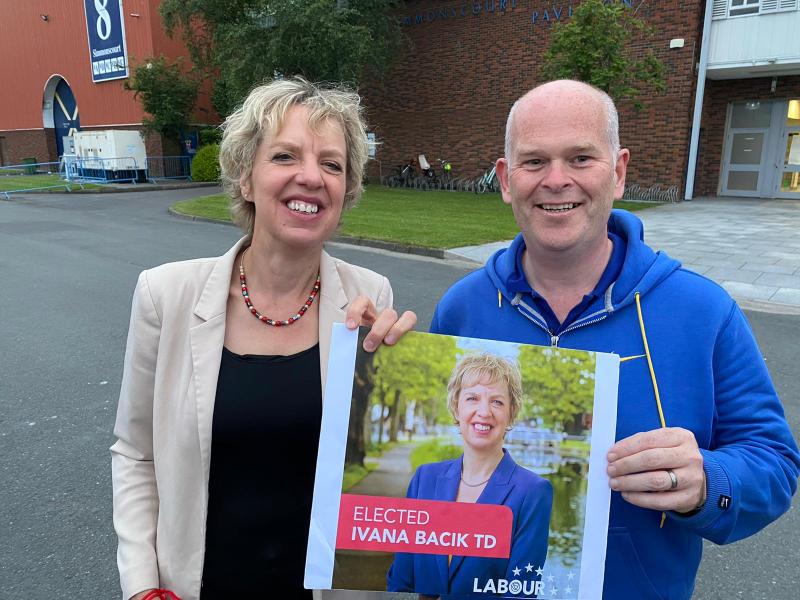 Apart from Labour Party leader Alan Kelly being from Nenagh, another Nenagh man, Dermot Ryan, played a huge role in her election as her campaign manager.

And Ivana’s late stepfather Jerry Quinlan was also from Nenagh.

In another twist of fate, Dermot and Ivana first met each other after Dermot bumped into Jerry and her mum, Rina, in a New York restaurant run by the Conroy brothers from Aglish.

“I was so honoured to work as Ivana’s campaign manager. I have worked on her campaigns since she ran in the European elections in 2004. I have worked with a lot of politicians over the years in Ireland and Australia, and she is up there with the very best. She is fearless and principled, but also has a level of humility and self-awareness that is rare for a political leader,” said Dermot of Ivana.

He recalled that his own late mother Susan, who ran the popular Half-Door pub and restaurant with her late husband John on Summerhill, always said “all roads lead to Nenagh”, and, he pointed out that Ivana had a number of ties to the town.

“Apart from myself and Alan Kelly her stepfather was Jerry Quinlan. Jerry loved Ivana and we talked about him a lot in the last few weeks. He would have loved it all.

“Ivana and myself called to her mum on polling day, to go to vote with her. As we were leaving the house there was a lovely photo of Jerry Quinlan on the mantlepiece. Ivana held it, we took a photo, and Rina asked me to send it to Jerry’s good friends Paudie and Tess O’Kennedy, to say we were getting Jerry’s approval to go out and vote Labour.

“He was a great Michael O’Kennedy and Fianna Fáil man back in the day but had huge respect for the importance of politics and was so supportive of Ivana’s career.”

Dermot then recalled that he had met Jerry and Rina in a restaurant owned by the Conroy brothers from Aglish when he lived in New York back in the early 2000s.

“I had known of Ivana, and her mum suggested I contact Ivana when I was moved back to Ireland. I did, we met up for a coffee and hit it off straight away, and have been friends and Labour campaigners together since.

Dermot became active in Labour politics when he was in Nenagh, being recruited to the party by former councillor and Nenagh UDC cathaoirleach Sally Gardiner.

His first job out of college was working for then senator Kathleen O’Meara.

He later lived in Sydney for seven years where he held a senior role in an Australian trade union and was heavily involved in the Australian Labor Party.

Just before Covid, he managed the leadership campaign of Aodhán Ó Riordáin, who lost to Alan Kelly.

Dermot runs his own consultancy and advises public sector and non-profit organisations on how they should interact with the political system and Government officials.