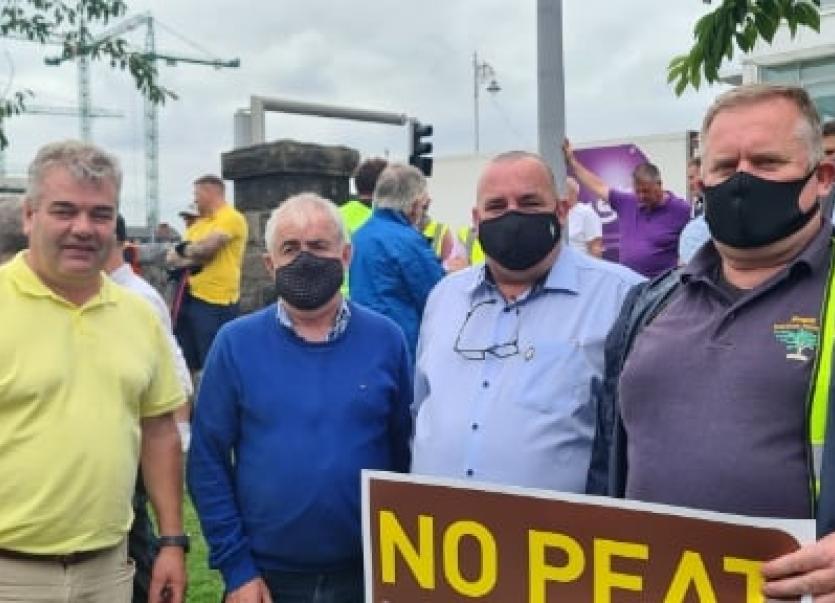 Tipperary horticulturists joined last week’s protest by IFA outside the National Convention Centre to highlight the crisis the industry is facing due to the ban on harvesting peat.

Among those on the protest were Frank Alley, Dundrum Nurseries. They were joined by Tipperary TDs Michael Lowry and Martin Browne.

“Without immediate Government intervention to allow the harvesting of peat, the Irish horticultural sector faces wipe out. The Ministers in charge here have to step in save the sector. The situation is now beyond serious,” IFA president said Tim Cullinan.

Growers built a 50 square metre sq display with their produce outside the Convention Centre, where the Dáil was sitting, to depict the message No Peat, No Produce to remind Government that the horticultural sector cannot supply Irish produce for consumers without peat.

Following a ruling of the High Court in September 2019, harvesting of peat from bogs greater than 30 hectares now requires all harvesters to go through a complex licensing and planning regime.

Horticultural peat harvesting on Irish bogs has all but ceased and Irish peat supplies will be exhausted before September.

As it currently stands Ireland will be forced to import peat from Europe and the Baltics, which is at odds with the Green credentials of the horticultural sector.

To further compound the issue, there is a shortage of peat on the European market and growers are having their orders refused.

Cullinan at the protest out the National Convention Centre

“Our horticultural sector, which includes nurseries like Dundrum Nurseries, and our mushroom sector have been left to deal with the consequences of the ban, even though horticultural peat only accounts for a miniscule amount of the peat traditionally harvested,” he said.

He highlighted that three Government departments had responsibility for this issue - Heritage, Environment and Agriculture - yet all of them are looking on while taking no action. No plans had been put in place to deal with the shortage of horticultural peat, and Just Transition in its current form is of little use to them.

“The sector has been abandoned and only lip service is being given to their concerns by the three Departments. Thousands of jobs are at risk,” he said.