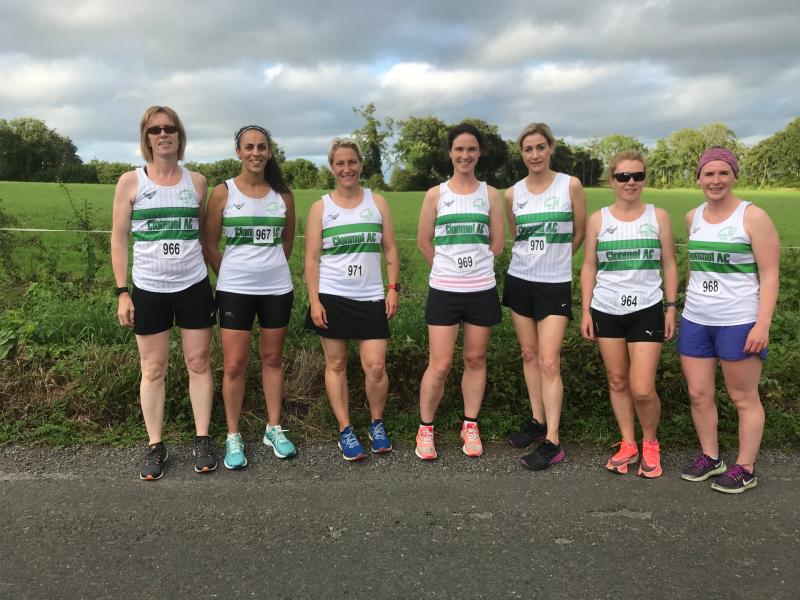 Templemore was the venue on July 14 for the County Novice B Road Championships. Once again it is great to report that the club was very well represented in both races on a very warm and humid night for racing.
In the Women’s 3k race we had seven athletes going to the start and it is great to report that they all ran very well, none more so than Anne Marie Halpin.
Anne Marie found herself leading the chasing group at around 1km. She kept a good tempo going that ensured she was in control and able to withstand any challenges. Then as they came into the town, Anne Marie increased the pace and gradually went clear to take the silver medal in 11 mins 59 secs. Then we had Marina Quinlan, competing in this event for the very first time emerging out of the chasing pack at 2km and putting in a strong surge up the finishing incline when 4th in 12 mins 52 secs. She was closely followed by her sister Jennifer, who was closing with every stride when finishing a very close 5th in 13 mins 1 sec. They, along with Anne Marie, were very convincing winners of the club gold medals, winning back the cup last won in 2018.
We also had great running from Sareen Walsh, who came through to finish strongly in 6th place in 13 mins 26 secs, and she was followed closely across the line by two more debutants Brid Hearne 8th in 13 mins 42 secs and Radka Holaskova 9th place in 13 mins 51 secs. These three athletes combined very well to win the club silver medals. We also had Stephanie Byrne running well when finishing 12th in 14 mins 25 secs. Congrats especially to Marina, Jennifer, Brid and Radka on winning their first county medals with the club.
In the men’s race we also saw some great performances, especially Eelco Beckers who ran on well up the finishing incline to finish 16th in 23 mins 26 secs. We also had good performances from Barry Horgan 21st (23:54), Bohus Jarabek 26th (24:22), Pat Coffey 28th (24:40), Vincent McHugh 29th (25:03), Kenny Brett 33rd (25:23), Sean O’Dea 35th (25:46), David Lorigan 36th (25:54), Michael McNamara 37th (26:01), Ben McGuire 40th (28:15), Donal Casey 41st (28:51), Noel Howley 42nd (29:30), Liam Kiely 43rd (29:50) and Ned O’Brien 44th (30:54).

Intermediate Road
Ballyneale is the venue on Sunday for the county intermediate women’s 4k at 12 noon and the men’s 8k at 1pm. (See County Athletics notes on this page).