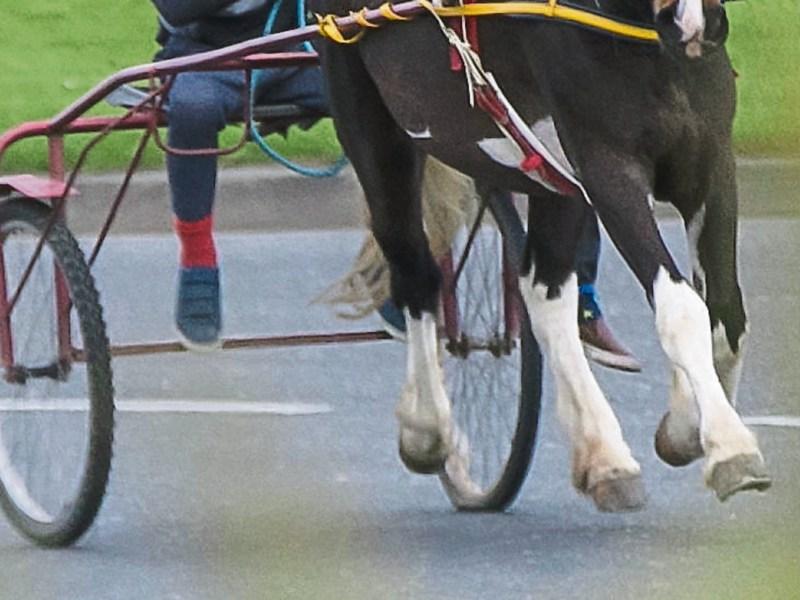 A motorist who allowed his passenger to lean out of the car and film a horse running along the public road while it pulled a sulky was fined for careless driving at Nenagh Court.

Shane Curtin of Knockane, Newcastle West, county Limerick, had pleaded not guilty through his solicitor at an earlier court to dangerous driving at Carrigatogher, Nenagh, on Janaury 6, 2019.

Judge Elizabeth MacGrath had adjourned the matter to July to consider whether or not Mr Curtin had breached the terms of the Road Traffic Act in relation to dangerous driving.

When the case resumed last Thursday, Judge MacGrath ruled that Mr Curtin had not breached the terms for dangerous driving but had for careless driving.

She said her main concern was the passenger leaning out the window and instanced other cases where the driver had been held responsible for the passenger’s behaviour and had been charged with dangerous driving.

“The action of the passenger can amount to a liability for the driver,” she remarked.

“My concern was the conduct of the passenger. However, having looked at the overall case, I am of the view that the threshold for dangerous driving was not met, but it was for careless driving.

The court heard that Mr Curtin had 34 previous convictions, 28 of which were under the Road Traffic Act, but none were for dangerous or careless driving.

Mr Curtin’s solicitor, Johnny Spencer, said that his client was 43 years old and had five children.

He said that Mr Curtin ran a skip hire business and was in the UK on business at present.

He said Mr Curtin was a settled member of the Traveller community and sulky driving was “part of the culture. It won’t happen again.”

At the earlier court, Garda Willie Hayes had said that the local gardaí received a call about a sulky race on the roadway.

When he went to the area, he had observed a horse and trap coming towards the patrol car.

It was being followed by a vehicle and he observed a man hanging out of the passenger window.
This man appeared to be filming the horse and trap on his phone.

Garda Hayes had said that, when stopped, Mr Curtin apologised to him.

He spoke to the passenger who admitted he had been hanging out of the window while the car had been moving.

Garda Hayes said the incident happened at around 11.40am on a Sunday.
While the roadway carried a lot of traffic during the week, a lot of cyclists used it on the weekends as there was a cycling lane on it.

Mr Curtin had been driving half on the carriageway and half in the cycle lane, he said.

Mr Curtin had passed a junction driving in this manner, the court heard.

Cross-examined by solicitor Johnny Spencer, for Mr Curtin, Garda Hayes had agreed there was only one car involved and that it was travelling at about 40km/h behind the horse and trap. It was not on the wrong side of the road.

He had also agreed that the passenger had not been a minor and that he had apologised.

There had been no issue around the welfare of the horse involved, he said

However, Garda Hayes had said he deemed the driving to be dangerous.

Mr Spencer had asked Garda Hayes if he accepted that young children often hang out of car windows if they had won a match final.

“I accept that but I don’t condone it,” replied Garda Hayes.

He said the horse had belonged to the passenger who said he had been watching it for form.

Mr Spencer had said his client had explained that the horse had been to the vet for a procedure and the vet had advised him to check its form.

Mr Spencer had submitted that there was no basis for charging his client with dangerous driving.

Mr Curtin had been driving at 40km/h in good conditions and the cycle lane would not have been in use much at that time of the year.

“The passenger sitting out the window was an adult and should have known better,” he had said.

She fined Mr Curtin €500 for careless driving when the case was resumed last Thursday.