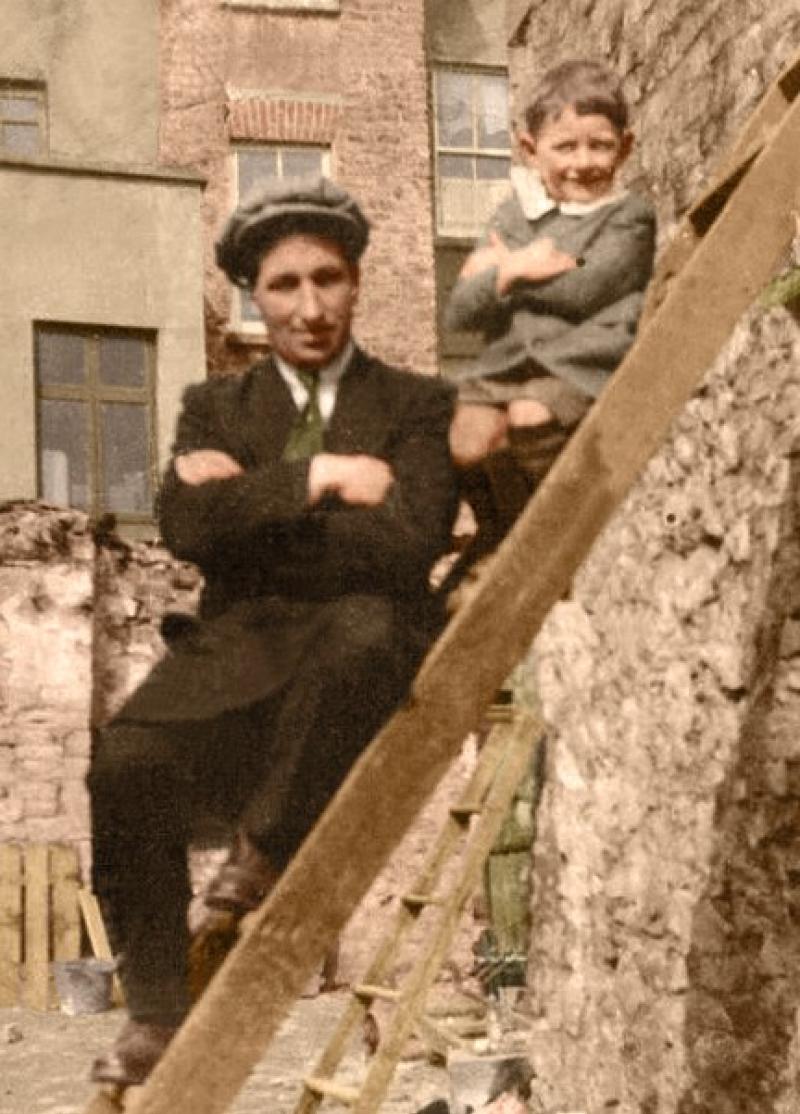 Michael 'Mixey' O'Connell and his son, Michael, at the rear of 24 Liberty Square

A plaque will be unveiled at 24 Liberty Square this coming Sunday in honour of Michael “Mixey” O’Connell, vice-commandant / intelligence officer of the IRA’s No 2 (Mid) Tipperary Brigade by his grandson, Neville O’Connell.

The event is being organised by the Tipperary in the Decade of Revolution Group, and they have worked with the O’Connell family and others to stage the event.

Local historians Seán Hogan and Neville O’Connell have compiled a high quality 40-page centenary booklet titled War, Truce and Treaty in an Irish Town – Thurles in 1921 telling the dramatic and deadly events that took place in Thurles in 1921.

The booklet will be distributed during the event on August 14 and will be available for €5 at the Bookworm bookshop in Thurles.

The conflict was particularly bloody in Thurles in 1921.

On March 7, 1921, the Thurles IRA abducted and shot two local men, James Maher and Patrick Meara, alleging they had been giving information to Crown Forces.

On the night after their bodies were found on March 9, groups of gunmen, believed to be police, raided houses across Thurles.

They shot dead Laurence Hickey and William Loughnane, and badly wounded another man, Denis Regan, but failed to find their targets in the other houses.

The places associated with the deadly events of that particular week will be covered in a walking tour on Sunday.

After the end of the War, when Truce and Treaty were finalised, Thurles was also the setting for one of the most potentially destabilising breaches of the Truce on December 9. 1921.

A hand grenade was thrown from the bridge over the railway track onto the station platform below.

This was aimed at a train bringing IRA prisoners released under the terms of the Treaty home to counties all over Munster, but injured many bystanders on the platform.

his reckless event which, despite Truce and Treaty being in place, would lead to further bloodshed and death, was the culmination of a bloody year in the town of Thurles and surrounding areas.

The event this Sunday will remember the people who were shot and killed in Thurles in 1921 and the impact of events on the individuals and families involved.

While O’Connell survived that deadly year in Thurles, his neighbour Laurence Hickey was shot dead in the midnight raid on his pub in Liberty Square. Hickey’s death was one of the four fatal shootings in Thurles in one week in March 1921.

It will also remember Sgt Thomas Enright, RIC, from Listowel in County Kerry who was shot dead on December 14, 1921 after the Truce and Treaty were put in place.

Following the unveiling of the plaque a walking tour, led by local historian Seán Hogan, will visit places associated with individuals and events in Thurles in 1921.

The unveiling and walking tour will take approximately 90 minutes and is free of charge and open to everyone. Face masks are required and people will be required to maintain social distancing.
The event starts at 4pm.

Tipperary in the Decade of Revolution is a non-political and non-partisan group of local historians whose aim is to bring history back to the locations where it was made – to remember the people and events of 100 years ago. They seek to remember the generation involved appropriately and with the respect they deserve.