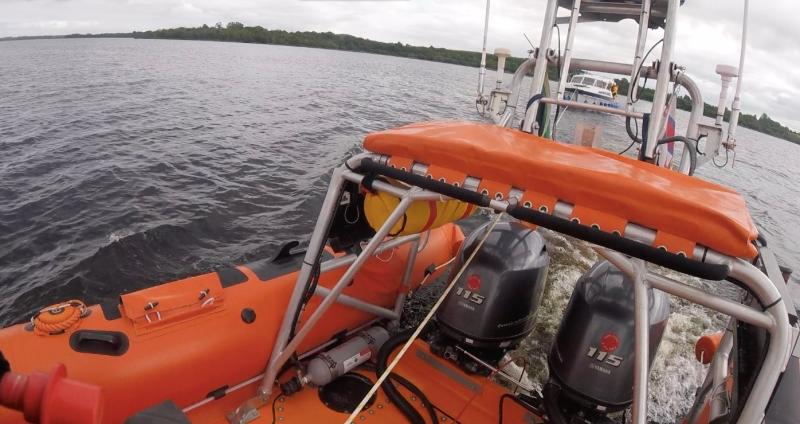 Lough Derg RNLI was called out this Monday to assist five people on separate vessels in difficulty in two back-to-back shouts on Lough Derg.

Earlier today, Valentia Coast Guard requested Lough Derg RNLI lifeboat to launch to assist a person on a 30ft cruiser reported aground close to Mountshannon Harbour at the southwest of Lough Derg.

At 11.40am the lifeboat Jean Spier launched with helm Eleanor Hooker, crew Owen Cavanagh, Joe O’Donoghue and Chris Parker on board. The lake had a moderate chop with Force 4 north-westerly winds. Visibility was good.

At 12.11pm the lifeboat was alongside the casualty vessel; the skipper was found to be safe and unharmed and wearing his lifejacket. An RNLI volunteer was transferred across to the cruiser. Given the location of the boat close to a navigation channel to a small marina, the lifeboat helm decided that the safest plan was to take the cruiser off the sandbar and out into safe water. The skipper was asked to drain his water tanks to lighten the vessel.

At 12.29pm the lifeboat had the vessel off the sandbar and under tow to safe water, where drives and rudder were found to be undamaged and in good working order. The lifeboat took their crew member back onto the lifeboat and the cruiser made way under its own power to Mountshannon Harbour.

At 12.32pm, when the lifeboat reported to Valentia Coast Guard and to inform them that they were now departing the scene, they were requested to attend a family of four on a 40ft cruiser broken down by Navigation Mark E at the Goat Road at the north-eastern shore of the lake. The cruiser had suffered an electrical failure and, to prevent being pushed on to a rocky shore, the skipper had dropped anchor.

At 12.57pm the lifeboat was alongside the casualty vessel. All people on board were safe and unharmed and wearing their lifejackets. An RNLI volunteer transferred across to the cruiser and confirmed that none of the systems on board were working. Given the location and weather conditions, the helm decided to take the cruiser under an astern tow to Kilgarvan Harbour, the safest close harbour.

Once the lifeboat approached the channel entrance to Kilgarvan Harbour, the astern tow was changed to an alongside tow, and at 1.49pm the cruiser was safely tied alongside at Kilgarvan.

The lifeboat departed the scene and was back at Station at 2.03pm.

Liam Maloney, deputy launching authority at Lough Derg RNLI, advises water users to "check the weather forecast for inland lakes and always carry a means of communication. Dial 999 or 112 and ask for marine rescue if you find yourself in difficulty on the water."