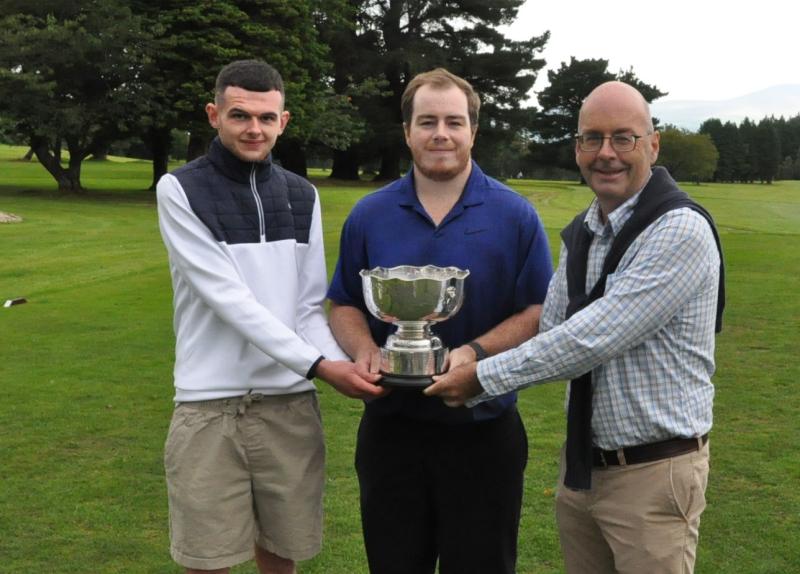 Results of the Paddy Murray Cup 2021
Trailing by three on the 14th teebox, Donal Foley and Kevin Corry could have thrown in the towel in last Sunday’s Paddy Murray Cup Final but this pair are not for surrendering.

John Kelly Jnr and Colm Galvin seemed close to victory after Kelly birdied the index 1 13th, his third birdie of the day but wins at the 14th, 15th and 16th for Foley and Corry had the match poised for a grandstand finish.

A half at the par three 17th sent the match up 18 all square.

With good drives from Donal and Kevin the younger pairing needed to respond. Although Kelly’s drive was unlucky to find trouble on the right, Colm Galvin's drive found the middle of the fairway. He sent his second just short of the bunker on the right and following his long chip Colm was left with a short but tricky putt for a par. Donal or Kevin needed to sink one of their long par putts, and while both went close neither ball disappeared from view. Colm’s composure was evident as his par putt dropped for the victory in what was a terrific final.
As predicted, there was only going to be a puck of a ball in it. Well done to both pairs.

Paddy Murray's son Padraig and grandson Dominic were on hand to make the presentation of the Paddy Murray Cup to the victors.
We thank Padraig and the Murray family for taking on the sponsorship of this prestigious event.

The final of the Paddy Murray Fouball competition took place at Clonmel Golf Club last week, with victory eventually going to the pairing of Colm Galvin and John Kelly (Jnr) after a Titanic battle with Kevin Corry and Donal Foley, which was only decided on the 18th. Here Colm and John accept the cup, which was presented on behalf of the Murray family by Pauric (second from right, son of the late Paddy Murray ) and the late Paddy’s grandson, Dominic Murray, is on the extreme right