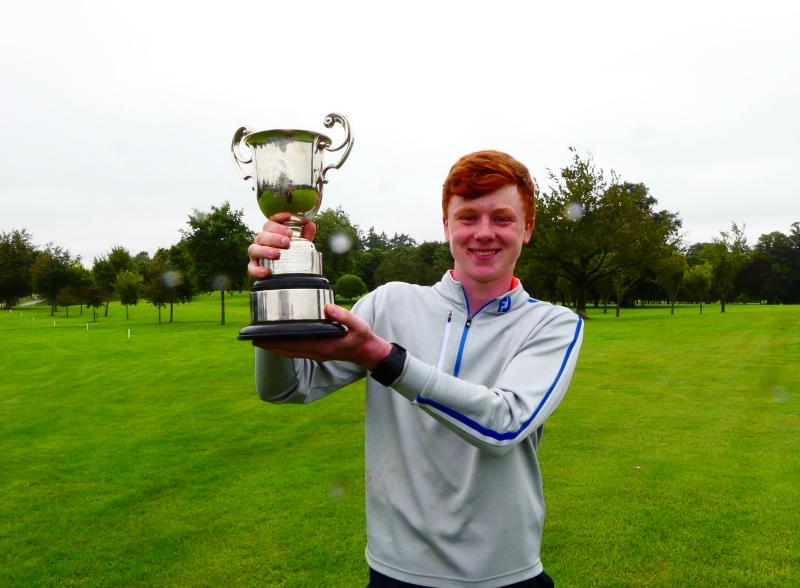 Donncha Cleary is the 2021 Irish Under-16 Boys Champion, after winning a six-hole play-off at Cahir Park Golf Club on Friday last.
The Tipperary Golf Club member defeated Tralee’s Mark Gazi on the third sudden-death hole, after the duo could not be separated in the regulation three hole play-off, as the duo parred 1, 2 and 18.
Cleary and Gazi both finished on level par for the day and for the tournament, as they finished a single shot ahead of the field, after the duo both bogeyed the 18th. Indeed the duo went blow for blow over the three days of golf, Wednesday, Thursday and Friday, shooting exactly the same score on all three days, 70, 72, 71. But on the sixth extra hole it was Donncha who prevailed.
County Louth’s Gavin Tiernan finished in third place on +1, after a level par round of 71.
Harry McArdle (Warrenpoint) and Darcy Hogg (Belvoir Park) both finished in a tie for fourth place on +3.
Overnight leader Adam Buchanan (Malone) and Eoghan Cassidy finished in a tie for sixth on +4.
Speaking after the win, Cleary said it was an honour to win the title in his home county.
“I’m over the moon. I’ve been there or thereabouts before. To get the job done is fantastic. Hopefully there is more to come.
“It was nice to finish with a par. I played with Mark all day, and he played great. It’s nice to win the trophy, playing well
“I can still play this tournament next year. It means everything, and opens up a lot of doors for me. To win in your home county is fantastic.”

(Further report in this week's edition of The Nationalist)